News from the Office of Government Affairs

"There was an almost universally positive reception from staffers in the Illinois offices we visited. Even in the most difficult [meetings], we were able to find some common ground and have a meaningful discussion," said Marion White, a Chicago-area physicist and secretary/treasurer for the APS Division of Physics of Beams.

White, who described her experience as "amazing" and "life-changing," said she decided to participate in CVD because the United States has "fallen behind much of the rest of the developed world in science, technology, and education."

She further explained, "The threats to our security from climate change, disease, cyber attacks, [and] many others appear to be ignored at the highest levels. I decided if I could contribute to anything positive, I should try."

Kristan Corwin, chair-elect of the APS Division of Laser Sciences and associate dean for research at Kansas State University, expressed a similar concern about the country’s declining role as a global leader.

"I felt there has never been a more urgent need for scientists to reach out to Congress and ask for its help to preserve our nation’s leadership position in science and technology. Furthermore, I felt empowered by my experience as an associate dean with a bigger view of how academic research benefits and shapes our society at large." 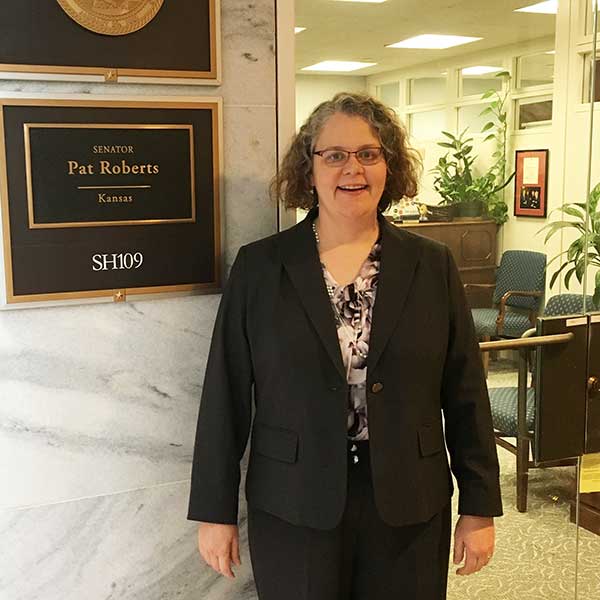 Kristan Corwin advocated for science in a recent visit to the office of U.S. Senator Pat Roberts of Kansas. 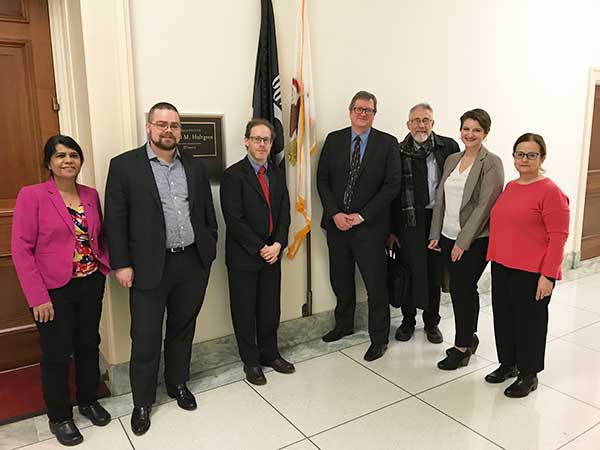 Corwin said she had a "wonderful" experience during the CVD. "Greg Mack [manager of grassroots advocacy] and the APS as a whole displayed a deep knowledge of the big issues, and also an understanding of what we might be able to ask for to advance the agenda of science funding immediately, with an eye toward the long run."

She added, "I found the staffers were really interested in how the larger issues affect their universities and districts back home, and what they can do to help."

During their meetings with Congress, APS members addressed the following issues: research funding and infrastructure, STEM education, H-1B visas, and climate change. The APS Office of Government Affairs (APS OGA) identified these issues after surveying members during various meetings held last year. Volunteers were asked to advocate for research and infrastructure funding and to choose among the other issues based on their particular interests.

To ensure volunteers were adequately prepared for the meetings, Mack first showed a video, and then organized small-group web videoconferences and an in-person training session. APS OGA also supplied them with materials and scheduled their meetings.

"We were strategic in our approach to the meetings and wanted the APS members to be as prepared and comfortable as possible," he said. "In addition to the online preparation, during the in-person session we held a mock meeting, and the volunteers had opportunities to brainstorm about the most crucial part of their meetings: telling their personal stories and connecting the issues to their states and districts."

Mack added, "I feel everyone had a good handle on the issues and was equipped with pertinent information and materials to have constructive conversations."

"We’re off to a good start with our first CVD of 2018," said Francis Slakey, chief government affairs officer for APS OGA. "We’ll face challenges in 2018 similar to the ones we faced last year," Slakey added, "and the APS OGA will continue to up its game and partner with our APS units."

In 2017, APS OGA assisted Society members with 14,873 contacts—phone calls, emails, and meetings—to their congressional representatives on crucial science policy issues. These included targeted approaches in specific states and districts, 15 nationwide online-campaigns for APS units, and activities at APS meetings. In many cases, the House and Senate took action influenced by the strong response from APS members.

APS OGA will continue to implement its effective integrated advocacy strategy in 2018, supplementing it with even more enhanced targeting and mobilization methods. The office also plans to bring in new voices and partners to advocate for science, including working with the Packard Foundation and nearly a dozen science and engineering organizations on a coordinated effort to advocate for the federal investment in research.

"We are always developing and offering ways to help APS members be a voice for physics," said Mack.

To learn more about the five issues the APS volunteers advocated for during the recent CVD and to take action, click on the Advocacy Dashboard.