2018 APS April Meeting, Columbus, OH — This year’s APS Andrei Sakharov Prize was presented during the April Meeting Awards Ceremony on Sunday, April 15th. The honor is awarded every two years to one or more scientists in recognition of their leadership and achievements in advocating for human rights. This year’s award showcased two individuals whose work has spanned decades: Ravi Kuchimanchi and Narges Mohammadi.

Kuchimanchi was in attendance at the awards ceremony. However, Mohammadi is currently imprisoned in Iran. Nayereh Tohidi accepted the award on her behalf. Tohidi is a professor of gender and women’s studies and director of Middle Eastern and Islamic studies at California State University, Northridge.

Both Kuchimanchi and Tohidi spoke in a session Monday morning. Tohidi read an open letter from Mohammadi that she translated from Persian.

A River in India 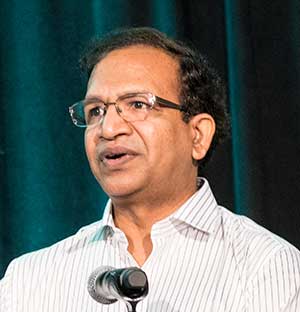 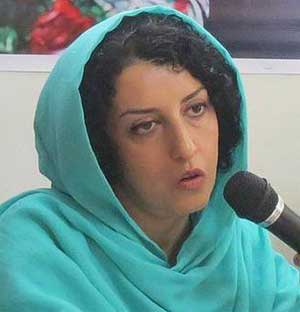 At the beginning of Ravi Kuchimanchi’s work in human rights is the story of a river in India. In the summer of 2000, after completing his postdoc, Kuchimanchi volunteered with Save Narmada, a movement to protect the villages of the Narmada valley from imminent flooding caused by nearby dam construction. The villagers said the flood waters would affect many more people than the government predicted.

Kuchimanchi was able to confirm that not only were the flood levels issued by the authorities incorrect, but they were off by a full three meters. This meant disaster for tens of thousands of people, driving them from their homes. Even worse, the incorrect levels would leave many without the right to rehabilitation funding provided by the government. Bridging this disconnect between the government and the local people would become the basis for Kuchimanchi’s work with the Association for India’s Development (AID).

In the twenty-seven years since its founding, the organization has grown to at least 800 volunteers and more than 100 projects organized by 36 chapters across the United States. The work has absorbed most of Kuchimanchi’s life. He says he is unable to focus on both human rights work and physics research at the same time. The concentration required of physics makes any other consideration difficult, but he emphasizes the importance of finding time for both. When not working for caste parity in India, he is conducting research on parity in physics.

Kuchimanchi shows deep compassion for the people he is working to help. One case he highlighted is the ongoing agrarian crisis in India. “In the past 10 years, 150,000 farmers have committed suicide in India.” He described crippling debt from loans taken out to buy pesticides, fertilizer, and seeds. The cost of maintaining their livelihood overtakes any profits gained, and more than 50% of livelihoods in India depend on agriculture.

AID’s work to support farmers and their families, to teach organic farming practices, and bring in sustainable technology is only one among the many projects of the organization. The goal of restoring caste parity remains at the forefront of the organization.

“We were connecting the privileged class with the underprivileged,” Kuchimanchi said. “If we made that connection, something beautiful would emerge.”

On the northern end of Tehran, a wall runs the length of a street where casual passers-by go about their daily business. In one place, a blue sign declares in both Persian and English: “Evin House of Detention.” Behind this wall, physicist Narges Mohammadi has spent more than 1000 days.

The road to Mohammadi’s imprisonment begins with two arrests during her time as a graduate student at Imam Khomeini International University. While studying physics, she founded the student organization “Illuminating Student Group.” The student organization worked to shed light on complex issues, including those of human rights.

Mohammadi describes the motivation for starting her human rights work in her open letter. “I felt compelled to join the struggle for freedom. What we experience is a decades-old tyranny, that cannot tolerate freedom of speech and thought. In the name of religion, it restricts and punishes science, intellect, and even love. It labels as a threat to national security and toxic to society whatever is not compatible with its political and economic interests. It considers punishing unwelcome ideas as a positive thing.”

In 2003 Mohammadi joined the Defenders of Human Rights Center (DHRC), an organization founded by five lawyers, including Nobel Peace Prize recipient Shirin Ebadi. She later became the vice president and a spokeswoman of the organization. In 2008 government representatives raided the office of the DHRC and officially shut down the organization.

In 2009, she was arrested a third time, ostensibly for her involvement with the DHRC. After just a few days out on bail, she was arrested again and this time sentenced to 14 years in prison. This sentence would be reduced to 10 years only to be increased to 16 years in May 2016.

From behind the walls of Evin Prison, Mohammadi describes the treatment of political prisoners. She writes, “They use ‘white torture’ on political prisoners: keeping suspects in solitary confinement is a routine and prevalent procedure. They confine a human being, alone, to a tiny cell for an unlimited and indefinite period of time, in a small space without light or proper air, where there is no sound, smell or movement.” The statement continues to describe verbal and physical abuse, forced medications, sleep deprivation, and many other things to induce fear.

During her time in Evin Prison, Mohammadi’s health has been in decline. Her imprisonment has been punctuated by periodic releases for treatment. Her most recent release in October 2015 ended after just 17 days when she was taken back into custody against medical advice. An appeal for her release in September 2016 resulted in the 16-year sentence being upheld.

Mohammadi writes, “I will not be silent in the face of human rights violations. In order to institutionalize human rights and achieve peace between the people and the state, I shall endure my deprivation of freedom and rights, even though separation from my children is nothing less than death for me.”

At this point while reading, Tohidi’s voice filled with emotion. She paused to steady herself before continuing with Mohammadi’s letter, “I am a woman and a mother, and with all my feminine and maternal sensibilities, I seek a world free from violence and injustice, even if I have suffered injustice and violence tens of times.”

Though Mohammadi is imprisoned, the news of her award reached her. As Tohidi and others who know her point out, knowing she received the award has given Mohammadi strength and provides a sense of solidarity.

“Sitting here in prison,” Mohammadi’s statement concludes, “I am deeply humbled by the honor you have bestowed on me and I will continue my efforts until we achieve peace, tolerance for plurality of views, and human rights.”

Shelly Lesher, chair of the Committee on International Freedom of Scientists (CIFS), concluded the session, eliciting equal parts shock and inspiration. Shock, because she detailed several active cases of human rights violations, and inspiration because she evoked hope by telling the audience how they could act. Reporting human rights violations, hosting a scholar at risk, and even just signing up for the CIFS network of scientists are all places to start. 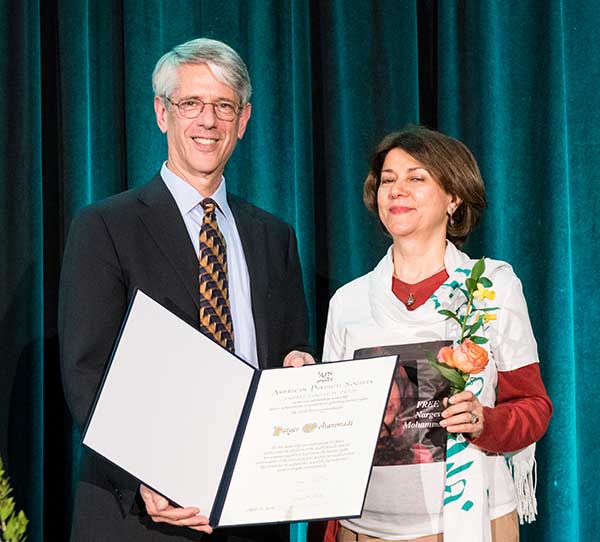 The APS Sakharov Prize was awarded to Narges Mohammadi, who is imprisoned in Iran. Nayereh Tohidi accepted the prize from 2018 APS President Roger Falcone on behalf of Mohammadi.

Universities can incorporate human rights discussions into physics. Lesher pointed to Kuchimanchi’s talk and how AID was formed during his graduate school days as an example of how this could be done. Further, universities can host scholars at risk. This does not necessarily require huge resources; these scientists typically do not want permanent positions. The goal is to take their skills back to their home countries when they are able to return.

Perhaps the biggest takeaway from Lesher’s talk is simply to get involved.

“Physicists have always been involved in human rights work,” Lesher said. “The need is great, greater than it’s been in years. And you can be involved at any stage in your career.”

The author is the Science Writing Intern at APS in College Park, Maryland.