Venkataraman Ramakrishnan started as a physicist. Then he became a biologist. Then he helped elucidate the structures and functions of the ribosome, the biomolecule that turns genetic code into protein, for which he won the 2009 Nobel Prize in Chemistry. Now he’s an author too, and his book is The Gene Machine: The Race to Decipher the Secrets of the Ribosome (Basic Books, 2018).

Ramakrishnan did his Ph.D. in theoretical physics but along the way, biology began to entice him and he realized this was his calling. He went back to grad school in life sciences—a humbling encounter, as few universities were interested in taking someone who already had a doctorate. It was frustrating at first becase he didn’t know the terms, was unfamiliar with lab work, and had to take undergrad courses to catch up. But as he once told a group of young scientists, “You have to be willing to go backwards and start from the beginning. You have to have humility.” 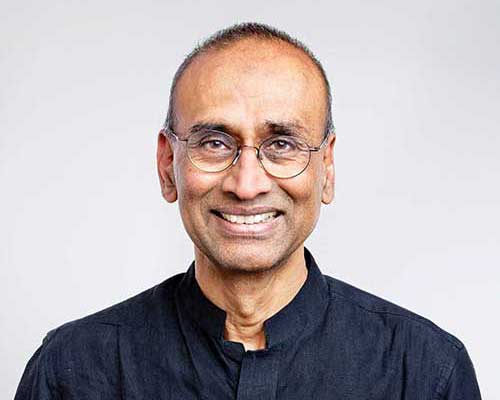 Ramakrishnan, who today is a senior scientist at the MRC Laboratory of Molecular Biology in Cambridge, UK and the president of the Royal Society, is a passionate advocate for science and science communication.

As I was explaining the nature of this article and the Profiles in Versatility column, concerning physicists in unusual career paths, he interrupted me, and shared his first gem of the day. “Most people would not call me a physicist,” he said. “You could think of me as a failed physicist if you like.” I couldn’t let that go, so our interview immediately commenced.

AGL: Do you consider yourself a failed physicist?

VR: It’s a little difficult to say because I was not interested in the problems I was working on. I didn’t have a good sense of what to do in physics. I felt if I stayed on, I would have done some very boring calculations that didn’t actually amount to anything. That was the negative part. Of course, the positive part was that I found modern molecular biology extremely interesting, so I went into it.

AGL: What was it that drew you to physics in the first place?

VR: I was attracted by the beauty, elegance, and ability to take complex phenomena and find the underlying unity in them. I think physics is very beautiful intellectually.

AGL: What was it about molecular biology that attracted you and continues to attract you?

VR: Molecular biology was going through a revolution, not unlike physics in the early half of the 20th Century.

AGL: You end the book by writing, “it still astonishes me that my career worked out at all after so many false starts and dead ends. My beginnings were not promising. There were so many times when I could have fallen off the edge and disappeared from the world of science, a fate I only avoided by changing track or starting over again.” What advice would you give other people who feel they are “failed physicists”?

VR: Physics is a great training for every science because it teaches you quantitative and mathematical thinking, and that way of approaching problems is becoming increasingly important in every field, including biology. So you can choose. You have a wide range of possibilities if you have that fundamental grounding.

AGL: You talk a lot about luck, and how you can’t underestimate it. How do you approach the role of luck?

VR: Be prepared or open-minded, so when you get a piece of luck you recognize it for what it is, and you capitalize on it. So if somebody tells you an idea you hadn’t thought of, you could say that’s luck. But it’s up to you to recognize what it means and build on it, and that’s not luck. It was Pasteur who said “Chance favors the prepared mind”.

AGL: Have you always been confident in your career?

VR: No, definitely not. All of us have imposter syndrome and we all think we have lucked out and fooled everybody and are about to be found out. Most of us hope to retire before we are found out. It does affect people who are underrepresented, whether it is due to geography, or ethnicity or gender, more. [Underrepresented minorities] will feel imposter syndrome more because they feel “this is not really my club and I don’t belong here”. But people need to realize everybody has it, but as a minority you might think that more.

AGL: You write in the book that you don’t like prizes. Has your view changed since winning the Nobel Prize?

VR: The Nobel Prize has changed my life enormously for the better. I have a voice and credibility and all sorts of things quite apart from the cash. But I think prizes apply a sports metaphor to science: it divides scientists into very few winners and the rest are losers, and in sports you can easily measure who comes first, second or third in a 100 meter race, but science is multidimensional and it is not always straightforward or even possible to say who are the top contributors to this field, because many people contribute to a field, especially one as complex as life sciences. So it’s not a healthy situation and it’s made somewhat more unhealthy by the kind of regard with which the community respects these prizes. Everywhere I go now my prefix is “Nobel Laureate,” as if that’s what defines me—not my work. It’s not like they’re saying, “you got the Nobel Prize because you did important work on the ribosome”. It’s more like “he’s important because he got the Nobel Prize.” It’s confusing cause with effect.