The APS Office of Government Affairs

As a researcher, Aycock earned her PhD from Cornell University in physics and is an experimental physicist who studied excitations in quantum matter.

As a member of Durbin’s energy and environment team, she worked on policy issues pertaining to scientific research, the national laboratories, energy, and the U.S. Environmental Protection Agency.

“I am most proud of drafting a letter Senator Durbin sent to the Environmental Protection Agency, requesting the agency require monitors at facilities that are contributors to manganese air pollution,” recalled Aycock. 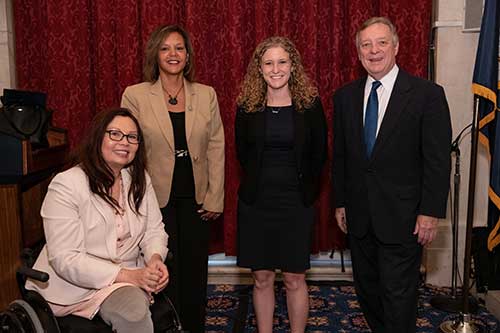 Manganese, a neurotoxin, had been detected at harmful levels at various facilities in southeast Chicago. Residents and businesses asked Durbin’s office to advocate for the monitors. After receiving the letter, sent by Durbin, Senator Tammy Duckworth, and Representative Robin Kelly, all of whom represent either all or parts of Illinois, the EPA required installation of the monitors.

“I felt proud that I was able to help amplify the voices of the local community. It was a powerful experience,” said Aycock.

Another key highlight of Aycock’s congressional fellowship: raising awareness of climate change and supporting policies to mitigate its impact.

“One of Senator Durbin’s highest priorities was consistent, steady growth in funding for scientific research,” said Aycock. “Two of the Department of Energy (DOE)’s Office of Science national labs—Argonne National Lab and Fermi National Accelerator Laboratory—are in Illinois. I enjoyed working with both the labs to move forward on mutual policy goals.”

Aycock added, “I coordinated letters with Senator Tammy Duckworth’s office to support Argonne’s upgrade of the Advanced Photon Source and real growth in funding for the DOE Office of Science.”

As a graduate student working at the Joint Quantum Institute, a partnership of the National Institute of Standards and Technology (NIST) and the University of Maryland, Aycock was familiar with research taking place at US national laboratories. But after she began her congressional fellowship, she said she learned more about the depth of the research taking place at those laboratories.

“I really didn’t get exposed to the DOE national laboratories until I participated in this fellowship. I’ve learned so much about high energy physics from visiting many of the national laboratories,” she said, adding that she toured nine national labs, including SLAC and Fermilab. “On Capitol Hill, I was not a cold atom physicist. I was a physicist, and more broadly, a scientist. Colleagues looked to me to provide broad insight into science, not solely my research expertise developed in graduate school.”

Aycock also had an opportunity to advocate for funding for the NIST.

“It was important to me that Senator Durbin had a big view of the science ecosystem,” said Aycock, explaining that the senator stepped in to write a letter in support of funding for NIST after noticing that the agency had not received the same support as other scientific agencies.

Additionally, Aycock put her analytic skills to good use.

“I performed a detailed policy analysis of Senators Lisa Murkowski and Cory Booker’s (D-NJ) Nuclear Leadership Act to support advanced nuclear reactor research and encourage domestic civilian investment in research and development of advanced nuclear power. I made recommendations for improving the bill and recommended that Senator Durbin co-sponsor it.”

Aycock said making sure the public understands the importance of science is a crucial lesson she learned during her fellowship.

“As the physics community, we need to make sure that we are communicating the importance of our research,” she said.

Scientific research has led to the development of myriad innovations, including the Internet, MRI, and Doppler radar—all inventions that have changed the lives of Americans. And for that reason, scientists should communicate the benefits of their work, explained Aycock.

“We have so much to share about the value of science,” she said.

Furthermore, she said, “all politics is local.”

“We should make sure that our congressional representatives know about the cool research that we are conducting,” she said.

The author is the APS Press Secretary.