Portland, Oregon—This past November, the 60th Annual Meeting of the APS Division of Plasma Physics (DPP) was joined by the 71st Annual Gaseous Electronics Conference. The presentations—more than 2,000 in total—ran the gamut from astrophysical plasmas to applications in biomedicine, along with fundamental plasma physics. Here are a couple of highlights.

Gabe Xu, an aerospace engineer at the University of Alabama in Huntsville, presented a study of the response of Venus flytraps—those carnivorous plants known for catching unsuspecting insects—to plasma. Xu and his collaborators, Alexander Volkov and Vladimir Kolobov, were interested in the effect of plasma-produced reactive oxygen and nitrogen species (“RONS”) on the plants’ ability to shut their traps. Molecules such as O2, O3, H2O2, and NO occur in a variety of plants and animals as part of their biological signaling systems.

Using an atmospheric-pressure plasma jet, the researchers directed helium plasma at the Venus flytraps. The team left a roughly 1-centimeter gap between the tip of the jet and the plants’ leaves. Xu and his colleagues found that the Venus flytraps exposed to RONS closed after roughly 1 second and reopened a few days later, consistent with the timing recorded for plants dining on insects. (Short “sensor hairs” on the insides of the leaves, when bent, normally induce electrical signals that cause the traps to snap shut.) Presumably the plant is absorbing the RONS, which are triggering some biological chemical behavior, said Xu. What the mechanism is that induces closure still remains elusive, however. “We're still quite in the dark about the actual biological and chemical pathways which are responsible for the observed effects,” said Xu. The scientists plan on testing how plasma-produced RONS affect other plants, like mimosa pudica, which also exhibit a mechanical response. “If we can determine what kind of signals the plasma is passing to the ‘brains’ of the plant, then we can better understand the bioelectrochemical mechanisms,” said Xu. 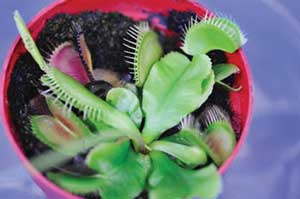 Venus flytrap plant after being treated with plasma.

Plasma in the Vineyard

Wine is a multi-billion-dollar industry, and the best reds and whites are produced from healthy grapes. But wine grapes, like some other fruits, are marked by a biological peculiarity: they must be exposed to a certain number of “chilling hours”—a cumulative duration of cold temperatures—to coax them out of dormancy in the spring. However, as the climate warms, some wine-growing regions may not receive a sufficient number of cold nights to satisfy this chilling requirement. That’s where plasma comes in.

Zaka-ul-Islam Mujahid, a plasma physicist at Jazan University in Saudi Arabia, and his colleagues applied 2, 5, and 10 minutes of plasma to dormant Muscat of Alexandria grape vines in the laboratory. They found that the short treatment released from dormancy plants that had never been chilled. The plasma-treated plants also exhibited healthier-looking leaves and vines and more synchronous growth than untreated plants. “In just a few minutes you can have the same effect….that you have with two months of chilling, said Mujahid. These findings reveal that plasma is a good alternative to applying hydrogen cyanamide, a toxic chemical banned in several countries that is sometimes used to break grape bud dormancy. The next step will be replicating these results in vineyards, said Mujahid. If that’s successful, “plasma may allow crops to be grown in areas where they haven’t been traditionally grown.”

A grape vine swells with buds in early spring.

Lightning comes in more than just jagged bolts—it’s also been reported as a luminous ball a few tens of centimeters in diameter. “Ball lightning” is extremely rare, and its properties are downright baffling: observers have clamed it can travel through windowpanes and it has been spotted within aircraft. Scientists don’t know how ball lightning forms, however, and why it’s often accompanied by a strong odor and buzzing noises. It’s surprising that we don’t understand a phenomenon that’s been recorded for centuries, said Hui-Chun Wu, a physicist at Zhejiang University in China.

Wu has proposed a theoretical model to explain ball lightning. The first step to forming ball lightning, his theory postulates, is that the tip of what will become a lightning bolt generates more than 1015 electrons moving at nearly the speed of light. When this relativistic burst of electrons strikes the ground, it creates microwaves that ionize gases in the air to produce a plasma, Wu’s theory proposes. This plasma expands into a bubble with a diameter dictated by the wavelength of the electromagnetic radiation (roughly 20-50 centimeters). When molecules such as N2 and O2 in the plasma are excited by nearby electrons, they emit visible light. As a result, the spherical structure—the ball lightning—appears to glow. Wu’s model also explains the smells and sounds often associated with ball lightning: humans can hear microwaves because they create acoustic pressure in the inner ear, and the plasma creates ozone (O3) that gives off a distinctive odor. And because microwaves can travel through insulators like glass, Wu’s model is consistent with ball lightning being created on the other side of windowpanes. Wu is currently planning experiments to test his model—he aims to detect electrons and microwaves produced in high-voltage settings that mimic the conditions of lightning.

The author is a freelance writer in Portland, Oregon. 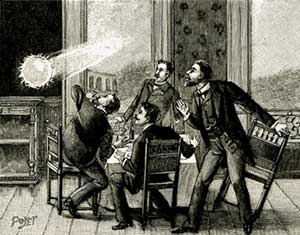