Six years ago, astronomers placed the 520-megapixel Dark Energy Camera (DECam) onto the 4-meter Blanco telescope at Cerro Tololo Inter-American Observatory in Chile. From this perch, it began a mission to map a portion of the sky with unprecedented detail and to better understand dark energy, the mysterious accelerator of the expansion of the universe. On January 9, 2019, this project, known as the Dark Energy Survey (DES), completed its data collection after gathering light from more than 300 million distant galaxies over 758 nights.

DES concluded its data taking with plenty to show for it: nearly 2,000 terabytes of raw data that collaborators can now comb through to look for clues about the nature of dark energy. The National Center for Supercomputing Applications at the University of Illinois at Urbana-Champaign has the task of storing the massive amount of data for analysis. The first step to using all that information, especially to pinpoint dark energy, is getting rid of all the noise that inevitably comes with detailed data collection. 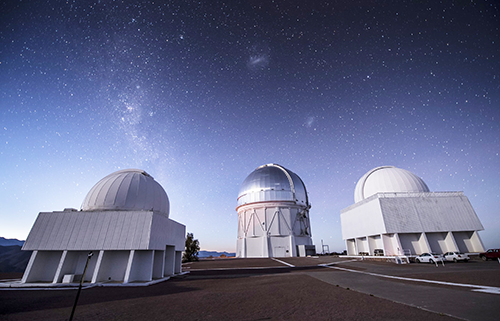 The Dark Energy Survey camera is mounted on the Blanco Telescope (center) at the Cerro Tololo Inter-American Observatory in Chile.

“We’re trying to tease out the signal of dark energy against a background of all sorts of noncosmological stuff that gets imprinted on the data,” said Josh Frieman, former DES director. “It’s a massive ongoing effort from many different people around the world.”

DES has already yielded more than 200 academic papers on a variety of cosmological phenomena, thanks to the versatility of the DECam as a tool for discovery. The goal of the project was to carry out the largest galaxy survey ever, covering 1/8th of the sky. During its run, DECam was the first experiment to be able to use four methods to probe dark energy by studying galaxy clusters, supernovae, the clumpiness of galaxies, and gravitational lensing.

In 2017, DES produced a number of remarkable results, including a measurement of the dark matter structure of the universe and detecting the most distant supernova to date. DES was also one of the sky surveys that spotted the visible counterpart of gravitational waves caused by the collision of two neutron stars, helping the LIGO/Virgo collaboration usher in the era of multi-messenger astronomy.

The DECam was constructed at Fermi National Laboratory in Batavia, Illinois, before taking the trip to the NSF-funded Cerro Tololo Inter-American Observatory in Chile. The DES collaboration includes more than 400 scientists from 26 institutions in seven countries. And in 2018, the first three years of DES data was publicly released, allowing amateur astronomers from anywhere with an internet connection to analyze the data.

“Working with DES has put me in contact with many remarkable scientists from all over the world,” Antonella Palmese, a postdoctoral researcher at Fermilab said. “It’s a special collaboration because you always feel like you are a necessary part of the experiment. There is always something useful you can do for the collaboration and for your own research.” Palmese began working on DES as a graduate student in 2015.

The DECam is expected to continue its survey of the night sky for another ten years, continuing its usefulness for a variety of astronomical observations.

“Although the data-taking for DES is coming to an end, DECam will continue its exploration of the universe from the Blanco telescope and is expected remain a front-line ‘engine of discovery’ for many years,” Cerro Tololo Inter-American Observatory Director Steve Heathcote said.

With the launch of DES six years ago, James Siegrist, associate director of science for high energy physics with the U.S. Department of Energy expressed the potential of the project. “The results of this survey will bring us closer to understanding the mystery of dark energy, and what it means for the universe,” said Siegrist.