From November 16 to 18, 2018 the APS Bridge Program and the National Mentoring Community (NMC) held a joint conference for the first time, drawing the highest number of undergraduates, graduate students, and faculty mentors to date. More than 200 attendees spent a day at the Google Headquarters and another two days at Stanford University learning about physics career opportunities.

The APS Bridge Program and the NMC partnered up for this conference to further the goal of increasing diversity of students in physics. The Bridge Program helps undergraduate students from underrepresented minorities enter graduate school, and the mentoring program helps ensure student success.

A large draw for this year’s record-setting attendance was the chance to visit Google’s headquarters in Mountain View, CA. The trip to Google focused on ways students can prepare for and succeed in physics careers in industry. Google employees were on hand to talk with conference attendees and show them around the company’s campus. 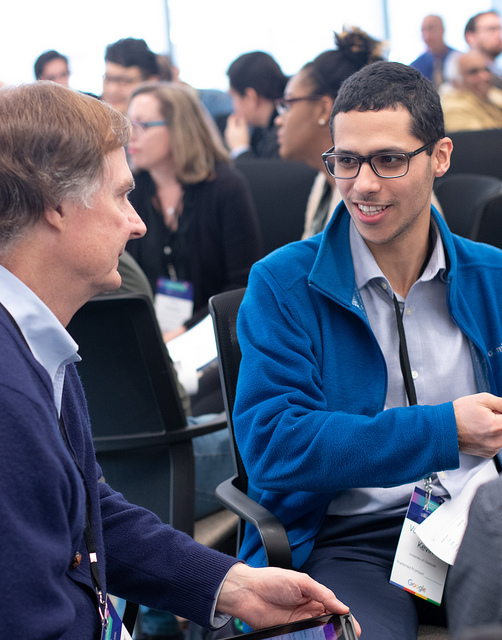 “I didn't know what to expect from the Google meeting since I assumed they only hired computer science degrees. It was super exciting to see physics representation at high-level positions at Google, and it was very inspiring,” said Marcus Dupont, a senior at Florida State University. “I know that if I decide to go into industry after my Ph.D., Google is the first place I'm applying. The conversations were very fruitful there."

Stanford University hosted the rest of the conference, which included a number of workshops for students as well as mentors attending the conference as part of NMC. Around 40 student attendees also participated in a poster competition for both undergraduate and graduate students.

The conference also included six plenary sessions covering important topics in physics education including retention of students, mental health in graduate education, and how mentors can better support their students. At one of the plenary sessions, Theodore Hodapp, APS Senior Advisor to Education and Diversity programs, spoke on the Inclusive Graduate Education Network, an alliance between APS and four other scientific societies—the American Chemical Society, the American Geophysical Union, the American Astronomical Society, and the Materials Research Society—set to expand the Bridge Program into fields beyond physics.

“The conference was very successful at helping physics students from underrepresented groups make important connections and learn strategies for thriving in physics,” said David May, Diversity and Education Programs Manager at APS. “In addition, APS strengthened its valuable connections with NSBP [the National Society of Black Physicists] and the NSHP [National Society of Hispanic Physicists] and is looking into running a joint conference with NSBP and APS's NMC program in 2020.”