On a mission for science, about 60 leaders of APS membership units recently braved the polar vortex that blanketed Capitol Hill to advocate for action on crucial policy issues during the Society’s first Congressional Visits Day (CVD) of the new year.

Representing 25 states across the country, the volunteers visited nearly 100 congressional offices to advocate for: supporting federally funded scientific research; requesting action on climate change; rebuilding America’s research infrastructure; promoting legislation to address sexual harassment in the sciences; and making the F-1 visa “dual intent” to enable international students to simultaneously study and apply for citizenship in the United States. The unit leaders shared personal stories related to the issues and explained to staffers how those stories affected their congressional members’ districts and states. 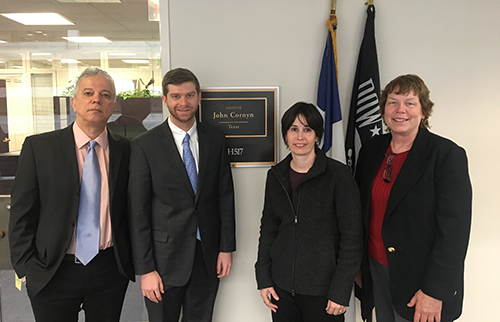 “The APS Office of Government Affairs (OGA) mobilized APS members to add their voices to these important science policy issues,” said APS President David Gross. “As stated in our newly released strategic plan, ‘APS is committed to advocating effectively for the conditions that support a robust scientific research enterprise, which enhances economic growth and trains people to address some of the urgent problems facing society.’”

Nadia Fomin, assistant professor of physics at the University of Tennessee, Knoxville, noted that she and her colleagues received favorable feedback after advocating for sustained, robust federally funded research during a total of 10 congressional meetings. They included talking with staffers representing U.S. Senators Lamar Alexander and Marsha Blackburn, both of whom represent her state.

Stacy Palen, physics professor and director of the Ott Planetarium at Weber University in Utah, said her discussion about climate change went well with staffers representing U.S. Senators Mitt Romney and Mike Lee, and U.S. Representative Rob Bishop. Palen explained that the Hill Air Force Base, situated on a plateau in her state, is at risk because it is susceptible to flash floods, droughts and wildfires due to climate change.

“The DoD report was very helpful in making the case that climate change is a national security issue,” she said. Palen added that staffers were amenable to her point and asked if they could follow up with her to gather more information.

The importance of America’s research infrastructure captured the attention of a staffer during a discussion in U.S. Senator Pat Toomey’s office. Nitin Samarth, chair-elect of the APS Division of Materials Physics and head of the Physics Department at Penn State University, highlighted the positive impact of the university’s materials research user facility.

“I explained to the staffer that the Materials Innovation Platform user facility at Penn State, funded by the National Science Foundation at $20 million, is instrumental in attracting young scientists and students to careers in materials physics. The staffer reacted positively, and I stressed that we could use more facilities such as this one.”

Another topic highlighted during CVD: promoting legislation to address sexual harassment in the sciences. Midhat Farooq, a Ph.D. physics student at the University of Michigan, said she was encouraged by the response she received concerning the legislation.

“My group met with the science staffer from U.S. Representative Debbie Dingell’s office, and he said that it should be a ‘no-brainer’ for Ms. Dingell to support a bill that addresses sexual harassment in the sciences,” she recalled.

APS leaders also did their part during CVD. Regarding the F-1 visa “dual intent” initiative, APS leadership pushed for amending Sections 101 and 214 of the Immigration and Nationality Act to help make the U.S. more attractive to international students.

“We want the U.S. to continue to attract the best and brightest students to our universities,” Gross said.

To ensure that future CVDs remain effective, a survey of APS members’ experiences on Capitol Hill has been circulated to them.

“OGA looks forward to responses from our participants to help us continue to make sure they have an enjoyable and impactful CVD. As concerned constituents and scientific experts, APS members are some of the most effective advocates on these policy issues,” said Mariah Heinzerling, APS Science Policy Assistant.

“A key goal of this office is to provide APS members with as many opportunities as possible to lend their voices in support of physics and policy issues that strengthen the scientific enterprise,” said Francis Slakey, APS Chief Government Affairs Officer.

The author is press secretary in the APS Office of Government Affairs.