It’s the spin, not the speed, that is critical for achieving the unique trajectory of a curve ball in baseball. We know this because of a physicist and lifelong baseball fan named Lyman Briggs, who conducted wind tunnel experiments in the late 1950s to determine the answer once and for all. And he did that work after retiring from a long, distinguished physics career, proving that there really is no age limit to scientific curiosity.

Born in 1874 in Battle Creek, Michigan, Briggs’ family ancestors came to America in 1621 on a ship called the Fortune, which followed the original Mayflower. He never attended high school, but was admitted to Michigan Agricultural College (now Michigan State University) by examination, graduating four years later second in his class. He majored in agriculture, but his true interests lay in mechanical engineering and physics. He earned a master’s degree in physics in 1895 from the University of Michigan, Ann Arbor, and finished his Ph.D. at Johns Hopkins University in 1903. 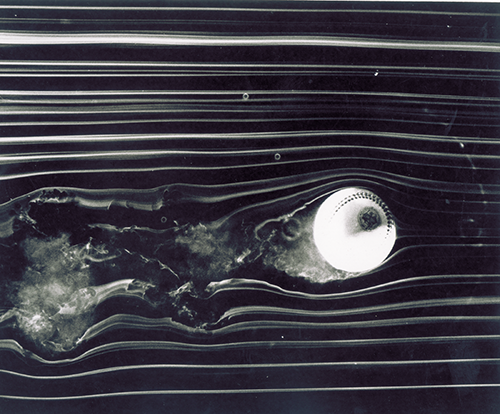 Airflow moving past a spinning baseball in a wind tunnel.

Briggs married his wife, Katherine Cooke, in 1896 while still an undergraduate. (Katherine and their daughter, Isabel, later developed the Myers-Briggs Type Indicator personality test.) After getting his Ph.D., he joined the U.S. Department of Agriculture, helping found the field of soil physics. One research area was studying how a plant’s environment affected its water uptake.

In 1920, Briggs joined the National Bureau of Standards (NBS, now the National Institute of Standards and Technology), heading the Engineering Physics Division. Along with Hugh L. Dryden, he did pioneering research on the aerodynamics of very high-speed airfoils. He also co-invented an earth inductor compass, used to determine an airplane’s bearing in relation to the Earth’s magnetic field. (Charles Lindbergh used such a compass on his historic trans-Atlantic flight in 1927.) In 1932, President Herbert C. Hoover nominated Briggs as the new director for NBS, but his Congressional approval was delayed, and Franklin D. Roosevelt became president in the interim. Roosevelt honored his predecessor’s choice, purportedly saying he had no idea what Briggs’ personal politics might be: “All I know is that he is the best qualified man for the job.”

During World War II, Roosevelt appointed the 65-year-old Briggs to head the Advisory Committee on Uranium, with the objective of investigating its fission potential. Progress was slow, in part due to Briggs’ own poor health. It was a British team, headed by German refugees Otto Frisch and Rudolf Peierls, who discovered that purified U-235 could be used to make an atomic bomb. A committee of prominent British scientists sent their report to Briggs, but heard nothing.

Finally, a frustrated Marcus Oliphant (who mentored Frisch and Peierls) flew to Washington to meet with Briggs personally, and was “amazed and distressed” to discover that Briggs had merely put the reports in his safe and hadn’t shown them to anyone. Oliphant insisted on meeting with the full Uranium Committee, and ultimately persuaded U.S. physicists to devote their efforts to developing the bomb. That effort ultimately became the Manhattan Project. Briggs retired from NSB in 1945, at age 72, just as the war was ending. But he still continued his research, setting up a laboratory at NBS for studying fluids under negative pressure—a return of sorts to his work on water uptake via capillary action of plants as a young scientist.

The war brought on a rubber shortage, so the rubber cores of baseballs during that period were replaced with cork. Pitchers loved it, but batters complained that the new balls didn’t travel as far when hit. Briggs conducted experiments at NIST and reported in a January 1945 article in the NBS Journal of Research that “a hard-hit ball [with a cork center] might be expected to fall about 30 feet shorter than the prewar ball hit under the same conditions.”

Nearly 15 years later, Briggs was back with more baseball physics experiments. There was a longstanding heated debate about whether a curve ball thrown by a baseball pitcher really curved, or whether it was an optical illusion. (St. Louis Cardinals pitcher Dizzy Dean once famously countered in the 1930s, “Ball can’t curve? Shucks, get behind a tree and I’ll hit you with an optical illusion.” Briggs knew the so-called Magnus Effect (in which a spinning object moving through a fluid experiences a differential pressure that causes the object to be deflected) played a role, but how much did the curvature depend on speed, and how much on the ball’s spin?

He set out to settle the debate once and for all, with the help of the Washington Senators baseball team. Pitchers threw baseballs at Griffith Field and Briggs photographed the flight path with a stroboscopic camera to capture speed and curvature. He also experimented with propelling a ball from an airgun and photographing the flight path. The balls had been marked to also measure the spin, but the marks were too small to show up on the resulting photographs.

So Briggs turned to the NSB wind tunnel he helped build back in 1917, tossing in baseballs and letting them freefall against the horizontal wind streams, causing the balls to curve. When the baseballs hit the ground, they bounced off a piece of cardboard treated with lampblack, putting a smudge on the ball to show the point of impact. The results, published on March 29, 1959, were clear: the speed of the ball had little effect on how much a curveball curves; spin is the critical factor.

Briggs died on March 25, 1963, at age 88. Edward Condon, who succeeded him as NSB director, declared, “Briggs should always be remembered as one of the great figures in Washington during the first half of the century, when the Federal Government was slowly and stumblingly groping towards a realization of the important role science must play in the full future development of human society.