For something that constitutes around 27% of the universe, dark matter has been hard to catch. As in past years, it was the topic of presentations and debate at the APS April meeting this year in Denver. Efforts to directly detect this strange substance have been largely fruitless, with the possible exception of the DArk MAtter (DAMA/LIBRA) experiment. This detector, located beneath a mountain in Italy’s Gran Sasso Underground Laboratory, has captured a multidecadal signal that the DAMA/LIBRA collaboration claims is evidence of dark matter.

Their results have been met with a steady stream of skepticism over the years. Other experiments have failed to replicate the DAMA/LIBRA results. No experiment, however, has put DAMA’s methods directly to the test, until now: Two experiments, COSINE-100 at Yangyang Underground Laboratory in South Korea and ANAIS-112 at Canfranc Underground Laboratory in Spain, are now online using sodium iodide crystals, the same material used in DAMA’s detectors. While their methods closely follow those at Gran Sasso, neither has reproduced DAMA/LIBRA’s signal. 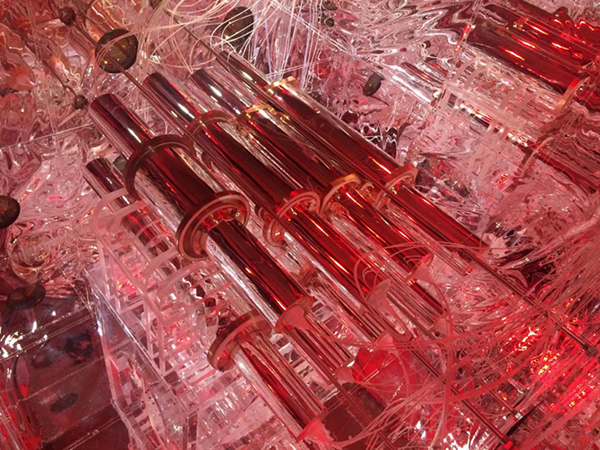 Two experiments, COSINE-100 (pictured) and ANAIS, employ the same detector material in an effort to replicate the DAMA/LIBRA signals claimed to result from dark matter.

“People have tried to come up with ideas to explain away the discrepancy, but no one has come up with a viable candidate for dark matter that can produce a signal in DAMA but not the other experiments,” said Reina Maruyama, a principal investigator on the COSINE-100 experiment. “It could be that we don’t know how to think about it as theorists, or it could be that the [DAMA/LIBRA] experiment is wrong.”

The existence of dark matter has long been postulated, but what form it takes is still a mystery (see article on page 3). Some researchers suggest it is a widely distributed—but undetected—particle. Another camp argues that dark matter need not exist at all and that alternative theories of gravitation can explain the missing mass conundrum.

Weakly interacting massive particles (WIMPs) are a popular dark matter particle candidate, and experimentalists have designed clever technologies to tease out their signatures. Thought to have formed in the early universe, these particles barely interact with the matter around them, making their detection a formidable task. Based on their abundance, detecting WIMPs should be like shooting fish in a barrel, but based on their properties, it's more like looking for a needle in a cosmic haystack.

DAMA/LIBRA scientists insist their detector is sensitive enough to detect these ghostly particles: It's shielded from cosmic rays and other background signals by 1.5 km of overlying rock, protected by layers of insulation, and submerged in a cocktail of chemicals. Even with all of this protection from the elements, their data must be teased out from an abundance of background noise.

The centerpiece of the detector is over a hundred kilograms of highly purified, thallium-doped sodium iodide crystals. Whenever a subatomic particle interacts with a nucleus inside these crystals, the detector measures a small burst of light. The experiment has collected over 20 years of data using this method, identifying a signal attributable to WIMPs. They’ve seen an annual modulation in nuclear activity, which peaks in June, then falls in December.

This seasonal effect could be explained by the following scenario: In June, the earth and the sun are traveling in the same direction through the Milky Way, while in December, the earth and the sun are moving in opposite directions. When the velocity vectors of the earth and sun combine in June, they travel faster through the galactic cloud of dark matter, and thus the detector likely interacts with more WIMPs. While it's a plausible explanation, it still doesn’t explain why COSINE-100 and ANAIS-112’s results aren’t similarly impacted.

“Certainly they are detecting something that is modulating”, said particle physicist Jodi Cooley, who was not involved with the research. “The question is, is it dark matter that’s modulating, or is it some kind of background related to the detector?”

ANAIS-112 recently reported their results in a paper submitted to Physical Review Letters based on 1.5 years of data, and found no statistically significant signal of annual modulation. Results from COSINE-100 ruled out the possibility of a signal produced by spin-independent WIMPS, but analyses from 1.7 years of data were found to be consistent both with no modulation, and with DAMA/LIBRA’s results. For a more definitive result, both collaborations are collecting more data. If future results from the COSINE-100 and ANAIS-112 experiments continue to contradict DAMA/LIBRA, they may indicate weaknesses in the WIMP theory, or in current detection methods.

“[A null result in COSINE-100] would close any type of loophole that theorists or experimentalists may try to come up with [to explain DAMA/LIBRA’s results]” says Maruyama. “It would be more satisfying if we knew what DAMA was actually seeing, but it’s rather difficult to explain somebody else's experiment.”

With more and more evidence stacking up against the DAMA/LIBRA collaboration’s persistent claims of dark matter detection, the case for WIMPs as a dark matter particle is looking increasingly wimp-y.

An Expanding World of Particles

While it’s too early to write an obituary for the WIMPs, new ideas are sparking an exciting revolution in dark matter. Theorists, experimentalists, and astrophysicists are expanding their searches. At this year’s April Meeting, 13 sessions were dedicated to the topic alone, featuring researchers across several APS membership units.

“The field of dark matter is exploding,” said Cooley.

New ideas and technologies are enabling experimentalists to reach sensitivities far beyond previous dark matter searches. Experiments such as LZ at the Sanford Underground Research Facility in South Dakota and SuperCDMS at Vale Inco Mine in Ontario are searching for WIMPs using alternative experimental approaches. Researchers are getting close to the neutrino floor, where detectors have such high sensitivity that incomprehensibly tiny neutrinos are detected and become background noise. Unlike DAMA/LIBRA and COSINE, SuperCDMS employs super cold crystals to detect vibrations (measured in phonons) to probe the universe for WIMPs. The project will begin data collection in 2020, and promises to provide a valuable new perspective on the dark matter debate.

If these experiments fail to find WIMPs, light mass particles called axions may rise as the most favorable candidate, illustrating an ever-expanding range of particle possibilities.

“We’re edging up to that last spot of the WIMP space, then we have this whole new uncharted territory with these light mass particles,” said Cooley, a collaborator on the SuperCDMS experiment. “We’re starting to develop a portfolio that spans multiple regions to cover a broad spectrum of dark matter candidates, and it feels to me like we could be on the verge of discovering something in the next round.”

Lissie Connors is a Science Communication Intern at APS.