The Goldwater Scholarship was established in 1986 to honor the late Senator Barry Goldwater (R-AZ), who served the United States for 56 years in the military and the Senate. Since 1989, the Goldwater Foundation has awarded 8,628 scholarships to promising college sophomores and juniors for a grand total of $68 million invested in these individuals’ futures.

To be a Goldwater Scholar, a student must be ranked among the best and brightest future scientists. All are ambitious and determined, and their research is expected to have a lasting impact in the scientific community.

This year, 496 scholarships were given to college students nominated by 443 academic institutions in all fields. Most of these students are majoring in natural science, together with 74 engineering majors and 62 mathematics and computer science majors. This year, the Foundation chose 84 awardees in physics and astronomy.

Receiving a Goldwater Scholarship shows these students’ commitment to research and leadership in their fields. The scholarship application requires excellent written communication skills, many hours of effort, and diverse scientific research experiences. Three of the individuals awarded this prestigious scholarship are featured below.

Haley Bowden, a junior at the University of California-Santa Barbara (UCSB), learned about the Goldwater Scholarship through the encouragement of her academic advisor, Sathya Guruswamy.

Since high school, Bowden has known physics was her passion. Participating in the Science Olympiad for K-12 students, she enjoyed the physics portion of the competitions so much she would study the subject even after the event.

Given her background, Bowden had no trouble completing the research portion of the Goldwater application. Involved in research for most of her summers, she participated in Eureka, a program at the Center for Science and Engineering Partnership at the University of California, Santa Barbara. She went on to UC LEADS, a network for students that offered mentoring from UC professors as well as paid summer research experiences. From there, Bowden landed in Guruswamy’s group. 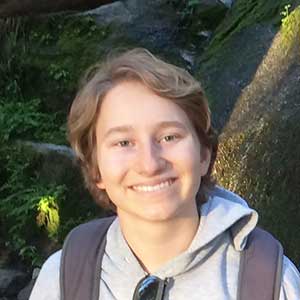 Bowden credits her support network for her success. Her mom, a woman in STEM herself, encouraged her to “embrace math and science.” Her professors and department pushed her to explore a variety of physics topics.

This is not the first year Bowden applied to the Goldwater, however. Her most important advice was to ask professors to provide feedback when preparing the application. Reactions from those not in physics can be beneficial as well, since the technical aspects of the application need to be understood by those in other fields. She had a better understanding of how to improve her application in the second try, and it paid off.

Nick Alward-Saxon is a staff member at UCSB who helps students applying to national awards and coordinates their nominations. “Haley's application stood out both in that her project PI had given her significant independence as a member of the research team and that she had thrived in that context and achieved results,” he said.

Alward-Saxon added that three important points of a Goldwater application are independence in research, development and use of problem-solving skills in addressing challenges, and an ability to think creatively and investigate alternative approaches.

Bowden looks forward to conducting research on galaxy formation in her doctoral work and continuing on to academia.

Jonathan Lu, a sophomore-equivalent at the University of North Texas (UNT), has no shortage of research experience. Starting at the age of 13, Lu began developing his research skills, and he now contributes to three different labs all centered around biophysics and material science.

Lu says he is driven by three goals: expanding his intellect, making practical contributions to human life and health, and exploring his passions. With those aims in mind, Lu hopes to advance the science that supports medicine.

One of his research projects was developing materials to repair broken bones in the lab of Nahendra Dahotre. An important goal was to keep the patient in mind by shortening healing times or reducing pain. Lu’s ability to zoom out of the immediate research task at hand to see the bigger picture explains his success when moving between research projects. 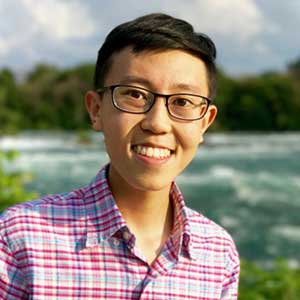 William Acree, a chemistry professor at UNT, has worked with Lu on simulating reactions between organic solutes and finding safer solvents for industry. Acree said he was impressed with Lu’s research experience. Having published three papers and with others in the works, Lu can, “go from one project to another pretty quickly,” without losing sight of his other projects.

For the Goldwater application, Acree said the Foundation wants “to see that the person is a team player and can contribute to society," two characteristics which Lu possesses. Lu struggled with condensing his aspirations into the word limit set by the application, but it helped him more concisely explain his goal. Acree recommends getting a wide variety of research experience when applying to the Goldwater Scholarship.

Lu hopes to get a Ph.D. in biophysics with a concentration in materials science.

Chris Moore, a physics and astronomy major at the University of Washington (UW), comes to the Goldwater Scholarship with a diverse background. For nine years prior to college, Moore served as a U.S. Navy SEAL. Rising through the ranks to become an instructor, he knew he wanted to study science after his service, and physics was the perfect fit.

Serving in the Navy gave Moore a head-start in many of the skills that physics departments want their students to graduate with: leadership, networking, and ambition.

“Leadership is difficult to foster, and something you have to learn,” he said. Coming to UW with well-developed leadership skills naturally led him to the Society of Physics Students (SPS), and eventually to becoming a leader within his SPS chapter. 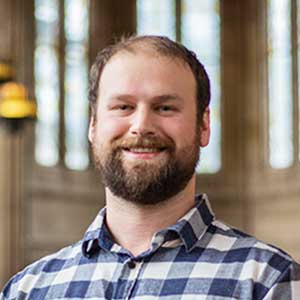 For networking, Moore credits the Lunchbox Seminars sponsored by SPS for exposing him to cutting edge research in the physics community. This seminar series hosts a wide range of colloquium speakers from all fields of physics. In these settings, students are able to communicate directly with leading scientists, Moore said. He noted that it's also a great opportunity for practicing his elevator pitch, a useful tool when working to “support the intersection of science and policy.”

Drive was the third key to Moore’s success. Physics majors have to be highly motivated, and receiving a Goldwater Scholarship was a national recognition of Moore’s effort. He started in cosmology but moved to condensed matter physics and now studies the dynamics of nitrogen vacancy centers in diamond. Moore is going to an REU (Research Experiences for Undergraduates) program at MIT this summer.

When considering his next steps after the Navy, he knew he wanted to “continue having a positive impact.” Moore plans to get a Ph.D. in condensed matter physics.

The author is the Education and Diversity Programs Coordinator at APS.