Phase transitions can be found in almost every aspect of our daily lives, perhaps something as simple as ice melting or water boiling. But physicists had long puzzled over how to calculate the behavior of a system at the critical point in detail until a man named Kenneth Geddes Wilson created a powerful general theory that could do just that.

Born on June 8, 1936, Wilson was the son of a prominent Harvard University chemist, E. Bright Wilson. His mother Emily had studied physics before her marriage. A precocious child, especially in mathematics, the young Wilson used to compute cube roots while waiting for the school bus. He was bored by his high school classes and skipped several grades, entering Harvard College at 16. He majored in math, became a collegiate track and field athlete, and worked at the Woods Hole Oceanographic Institution during the summers. Legend has it that he proved one of Freeman Dyson’s conjectures while waiting around for a computer to finish processing. 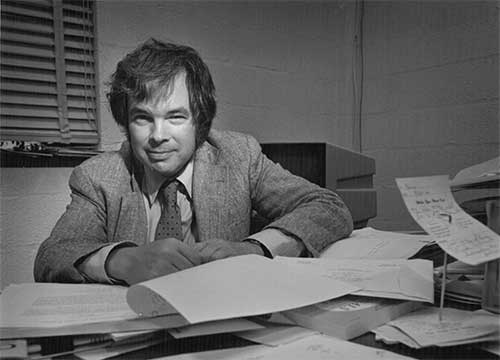 Wilson attended Caltech for his graduate studies, opting to switch his focus from math to physics because of its connection to the real world. His father recommended he approach either Richard Feynman or Murray Gell-Mann as a thesis advisor, and Gell-Mann’s work with Francis Low in 1951 on a mathematical tool known as the renormalization group appealed to Wilson. He completed his Ph.D. in 1961 and was a postdoc at Harvard and at CERN before he joined the faculty of Cornell University in 1963, where he remained for most of his physics career. (His brother David, a molecular biologist, was also a Cornell faculty member.)

His wife, Alison—whom he met while folk dancing—once observed that Wilson was “the most lacking in small talk of anyone I ever met.” He wanted his words to count. His early publications were also sparse, because of the difficult nature of the problems he chose to wrestle with. He wanted to develop tools that could be applied broadly to entire classes of problems. “My very strong desire to work in quantum field theory did not seem likely to lead to quick publications,” he wrote in his Nobel autobiography. “But I had already found out that I seemed to be able to get jobs even if I didn’t publish anything so I did not worry about publish or perish.”

Wilson’s experience with the renormalization group as a graduate student ended up having a profound influence on his work with phase transitions and critical points. The variation of the fundamental properties of particles and forces depended on the scale over which they were measured, and Wilson realized that this scaling was also crucial for phase transitions. He showed that it was possible to divide the problem up into many smaller, simpler pieces, making it possible to describe was happening at the critical point of a system one scale at a time. He received the 1982 Nobel Prize in physics for this work, with the deceptively simple citation, "for his theory for critical phenomena in connection with phase transitions."

He applied a similar approach to his work on the relatively new discipline of quantum field theory, which was plagued by mathematical infinities at the time. His new technique resolved those issues. His ideas were also crucial to the development of quantum chromodynamics, notably his invention of lattice gauge theory, imaging space as an interconnected lattice of bars, in which every intersection represents a point in spacetime.

According to Paul Ginsparg, who was mentored by Wilson at Cornell, Wilson was far ahead of his physics colleagues when it came to computing and networks, largely out of frustration. “After inventing lattice gauge theory in 1974, he found he didn’t have adequate computing power to solve the theory numerically, so he wanted easy ways to use large numbers of parallel processors,” Ginsparg wrote in a memoir. Wilson was involved with the building of five national scientific supercomputing centers by the National Science Foundation. In 1985, Cornell named him as director for its new Center for Theory and Simulation in Science and Engineering (now known as the Cornell Theory Center).

Late in his career, he and Alison moved to Ohio State University, where she had been hired to run its supercomputer center. (Wilson joked that he was the “spousal hire.”) There, he turned his efforts toward improving education. He was an early champion of the “active involvement” approach to K-12 science and math education, focusing on science by inquiry. “If you want to have an impact on science literacy, you need to rivet your attention on the 46 million students in our public schools, not on graduate students in our universities,” he once said. “And you need to understand the challenges confronting K-12 teachers.” Wilson died on June 15, 2013, just one week after turning 77, from complications associated with lymphoma.

“Wilson’s great legacy is that we now regard nearly every quantum field theory as an effective field theory,” Caltech physicist John Preskill wrote when news broke of Wilson’s passing. “We don’t demand or expect that the theory will continue working at arbitrarily short distances. At some stage it will break down and be replaced by a more fundamental description. More than anyone else, we have Ken Wilson to thank for this indispensable wisdom. Few ideas have changed physics so much.”