Physics has long been a contributor to medical imaging, dating back to the discovery and use of x-rays in 1895. And thanks to nuclear medicine, physics continues to play a role in improving how we are able to see inside the human body.

Imaging with radioactive nuclear isotopes is a valuable diagnostics technique, often used to detect cancer and investigate organ function. These isotopes, radioactive versions of compounds involved in metabolic processes, are injected into the body and concentrate in tumors or organs of interest. PET scans measure gamma ray photons that are produced when positrons emitted by the isotope collide and annihilate electrons in tissue. Because the compounds are chosen to bind to specific biomolecules, the bright 3D gamma ray images indicate biological activity. 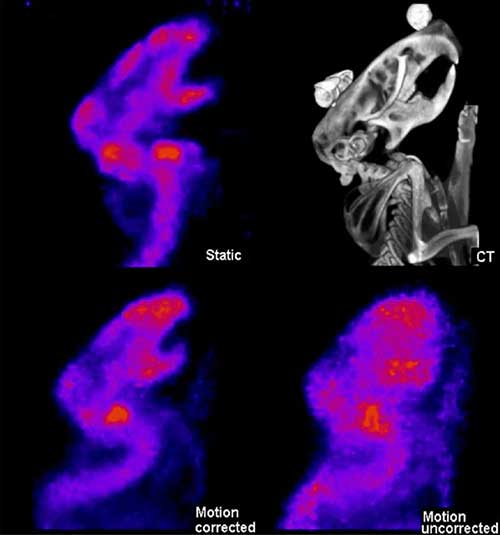 Lecoq is on a quest to further improve PET scanners as part of a team at CERN developing technology that would increase scan sensitivity by a factor of 200. A more sensitive scan produces a better image, but also improves the practicality and applications of the PET scan; greater sensitivity means a patient can be subjected to a lower dose of radiation, which allows more frequent, more comprehensive, or much gentler scans.

“PET is the imaging modality that has the highest sensitivity, however there are a number of medical challenges that we have to face which require further increasing the PET sensitivity,” said Lecoq at a press conference at the meeting. “There is more and more need for the ability to track a smaller number of cells, especially in the study of stem cells, and most importantly to allow a reduction of the dose in PET scans, which opens PET scans to new categories of patients including pregnant women, children, and even fetuses.”

To reach this improved sensitivity involves improving the timing resolution—the PET scan equivalent to increasing the shutter speed on a camera, leading to crisper images. When a photon pair is emitted during a scan, each traveling in opposite directions, they reach the detectors at roughly the same time, but the tiny differences in their times of flight hold information about where they were emitted. Current state of the art PET scans have time-of-flight (TOF) resolutions around 200 picoseconds, but Lecoq is part of an ambitious effort to achieve a 10 picosecond TOFPET scanner. Creating new metamaterials to act as improved scintillators in a PET scan would be a big step towards reaching this goal.

Weisenberger, a leader of the nuclear research group at Jefferson Lab, shared new ways radioisotopic imaging can be harnessed. Researchers at Jefferson Lab have created new ways to use PET and SPECT (single photo emission computed tomography) for imaging plants, unanesthetized animals, and tumors during surgery and improving mammography.

“We take a radioisotope and it's attached to a molecule that has some feature or some function within the body, which is the biological function of interest—these tiny molecules can be injected in vivo into biological systems such as people, animals, plants or microbes,” said Weisenberger. “It's very similar to what biologists have been doing for years with looking at features on a cell…we're using radioisotopes like a stain to make visible features in the body that we're interested in following.”

In collaboration with Duke University, Weisenberger’s group at Jefferson Lab has developed a plant imaging technique they call PhytoPET that uses a radioisotope of carbon dioxide to visualize photosynthesis in a live plant. They have also worked with Johns Hopkins University to develop a method of imaging unanesthetized live animals in motion with SPECT, which is important in studies wherein anesthesia may impact the results.

“We came up with a method in which you can track the motion of the mouse, and then use that information to computationally reconstruct what the uptake distribution [of a radioisotope] looks like,” said Weisenberger.

This computational movement correction is also being used in a hand-held gamma ray camera so that surgeons can identify specific locations of tumors or diseased lymph nodes. This device is currently undergoing clinical trials and should prevent unnecessary removal of healthy portions of the lymphatic system.

“In breast cancer surgery, the surgeons are interested in which lymph glands are involved in the tumor that's in the breast—the whole lymphatic system is your second circulatory system,” said Weisenberger. “In the past they used to remove all the glands that are near [the tumor], but that was certainly overkill. By using a radioisotope, they're actually able to figure out where it actually will be absorbed into the lymph nodes.”

Weisenberger’s group has also worked on developing a compact camera for breast imaging that can provide a detailed scan of even very dense breast tissue using a new type of collimator made up of tungsten plates that slide to provide precise direction of gamma rays.

“Just doing basic nuclear physics research creates an environment in which we can then look for other applications and discoveries that are uses just outside of nuclear physics,” said Weisenberger.