During World War I, it proved difficult for British forces to pinpoint the location of enemy artillery—at least until the development of a technique called sound ranging, which employed microphones to pick up the boom of the heavy guns firing. The leader of the group that developed it was a newly minted Nobel Laureate named William Lawrence Bragg.

Born in Adelaide, Australia in 1890, young William Lawrence came by his passion for science and math quite naturally, given that his father, William Henry Bragg, was a physicist at the University of Adelaide. In fact, when young Lawrence fell off his tricycle and broke his arm, his father used x-rays—then newly discovered by Willem Roentgen—to image the break, the first time x-rays were used for medical purposes in Australia. Bragg graduated from University of Adelaide in 1908, just as the family was moving to England so his father could chair the physics department at the University of Leeds. This enabled him to pursue advanced studies at Cambridge University, finishing with top honors in physics in 1911, becoming a fellow of Trinity College three years later.

Meanwhile, physicists around the globe were enthusiastically researching the properties of x-rays and exploring their potential for scientific applications. Bragg was inspired during a riverside stroll with an insight into the diffraction experiments conducted by Max von Laue involving x-ray beams scattering off a crystal. He realized that this diffraction would be affected by both the wavelength of the x-rays, the angle at which the beam hit the crystal, and the distance between the crystal’s atomic sheets, which he expressed mathematically as the Bragg equation. 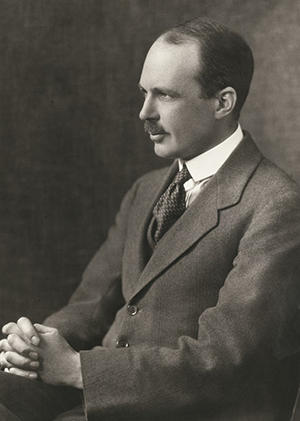 Bragg the elder devised an experimental apparatus to confirm Bragg junior's equation. Unfortunately, his father gave only passing (unnamed) credit to “his son” for the equation in the resulting paper, but did not list him as a co-author, hurting Bragg deeply. Nonetheless, he shared the 1915 Nobel Prize in Physics with his father, “[f]or their services in the analysis of crystal structure by means of x-ray.” He remains the youngest recipient of the physics Nobel to this day, and his work with his father laid the groundwork for the development of x-ray crystallography.

That same year, both Bragg and his brother Robert enlisted to fight for Great Britain in World War I. Tragically, his brother was killed in September, just before Bragg and his father received the Nobel Prize. Bragg started out in the Royal Horse Artillery, but that summer he was sent to the Royal Engineers and assigned the task of developing sound ranging to locate enemy artillery. Prior attempts had proved unsuccessful, in part because the heavier guns fired at such a low frequency the microphones couldn’t detect them.

Bragg joined forces with astronomer Charles Nordmann and Lucien Bull, a medical researcher investigating how to record heart beats. Together they devised a solution: using microphones built out of ammunition boxes that were better at picking up the low frequencies of the guns firing, and wrapping the microphones in fabric, thereby reducing noise from the wind. They also employed a “harp” galvanometer to record signals from several microphones positioned across a kilometer range. When the microphones picked up the sound of artillery, the electrical current they produced would flow through the galvanometer wires placed in a magnetic field, causing the wires to vibrate. The shadows of the moving wires were recorded on a continuous roll of film that could be developed in minutes, enabling quick calculations of the enemy’s location.

After World War I, Bragg joined the faculty of the Victoria University of Manchester, replacing Ernest Rutherford, who was moving to Cambridge. He continued his work in crystallography, focusing on inorganic compounds to avoid direct competition with his father’s research into organic crystals. Along with R.W. James, he figured out how to measure the number of electrons in the reflecting targets used in the scattering experiments, enabling them to determine the structures of silicates and other more complex crystals. From 1937 to 1938, he briefly served as director of the National Physical Laboratory in Teddington but was unhappy with how much administrative duties kept him from doing research.

Then Rutherford died, and Bragg was selected to replace him as director of the Cavendish Laboratory at Cambridge. While its stellar reputation had been built on atomic physics, Bragg proved an able administrator and set up a small research group in crystallography. Among his early students: an Austrian refugee named Max Perutz, who went on to use x-ray diffraction to unlock the structure of large biological molecules like myoglobin and hemoglobin. Perutz shared the 1962 Nobel Prize in Chemistry with John Kendrew for that work. In total, there have been 28 Nobel Prizes for research using some form of x-ray analysis.

When World War II broke out, Bragg shifted focus to the structure of metals, as well as consulting for the military on sonar and sound ranging technologies. He was knighted in 1941, one year before the death of his father. He also began a long affiliation with the Royal Institution, eventually succeeding his father as a resident professor in 1953, and serving as director from 1965-1966. He died near his Ipswich home on July 1, 1971 and is buried in Trinity College.