For the past 14 years, APS has sent comic books featuring the escapades of Spectra, a superhero with laser powers, and PhysicsQuest teaching kits linked to the books' physics concepts to classrooms around the world. The outreach team at APS has traveled to venues like Comic-Con International in San Diego to spread the word and interact with fans of all ages. Now, Spectra and PhysicsQuest have hit the Mile-High City, with an exclusive workshop at the Denver Pop Culture Con this past May.

James Roche, APS Outreach Programs Manager, headed up the workshop on May 31, assisted by Rebecca Thompson, author of the Spectra comics. For an audience of teachers and science fans, Roche and Thompson explained how to best use the PhysicsQuest kits in a classroom and demonstrated an experiment from Spectra’s Energetic Escape.

“Any time there is opportunity to connect our programs to new audiences, we get excited. The Spectra comics and the PhysicsQuest program are natural fits at comic conventions, and the Denver Pop Culture Con was no exception,” says Roche. “The glowing reception from the thousands of attendees who stopped by the Spectra booth and the subset that attended the PhysicsQuest workshop is exactly what drives us to push forward.”

The APS PhysicsQuest program has been sending comic books and accompanying kits, which include a teacher’s guide and materials for original physics demos, to middle school classrooms since 2005. Physics Quest: Spectra’s Energetic Escape is the 13th kit produced by APS and accompanies the 10th issue of the Spectra series. 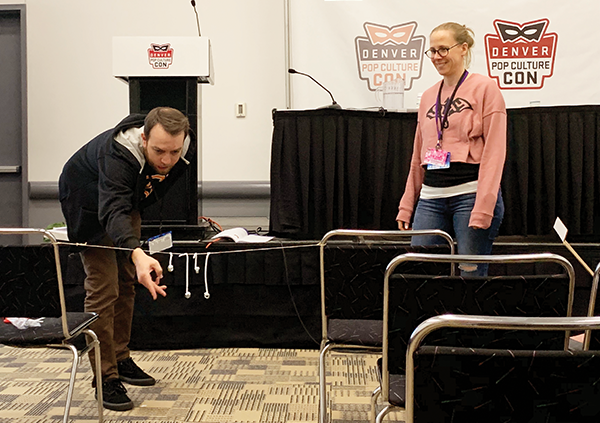 Each issue of Spectra incorporates a set of physics concepts into the adventures of Lucy Hene—alias Spectra—a middle school student with the power to turn into a human laser beam. Energetic Escape sees Spectra and friends using their knowledge of pendulums, friction, and potential and kinetic energy in a competition for concert tickets that turns dangerous.

“Pendulums are a great experiment when working with potential and kinetic energy, and there’s all kinds of things you can have students measure,” Thompson explained during the session. “You can have them record frequency and find the period of the pendulum with a stopwatch, and they can also experiment with different pendulum lengths or using multiple pendulums.”

A chain of rubber bands, stretched between two chairs, supported four pendulums, made from metal nuts and pipe cleaners of two different lengths. By having sets of pendulums at these different lengths—one set at six inches and the other at two and a quarter—the experiment goes beyond just measuring the frequency or period of a single pendulum, but also delves into the resonant energy transfer that goes on between pendulums of the same length. Swinging one six-inch pendulum will eventually cause the other—but not the shorter pendulums—to swing too.

The PhysicsQuest Teacher’s Guide includes a full explanation of this experiment and three others: Friction Fun, Straw Rockets, and Pinwheel Power. Student guides are also included with instructions for conducting the experiment, collecting data, and analyzing the results. A new PhysicsQuest kit covering thermodynamics will be available this year, thanks in part to funding from Google, and a special LIGO edition of Spectra on gravitational waves is also in the works.

“PhysicsQuest continues to be an integral part of our public engagement,” says Roche. “Over the past year, we've strived to evaluate and improve the program to better serve the students and educators that have made it such a success.”

For more on the Spectra series and the PhysicsQuest program visit the Physics Central website.