On August 9, APS hosted seven of the nation’s brightest young physicists for the annual Leroy Apker Award Selection Meeting. All of the Apker Award applicants boast an impressive resume of physics research at an undergraduate level, which they presented to a committee of distinguished physicists.

“Each of the finalists is already a winner,” Laura Greene (National High Magnetic Field Laboratory and Florida State University), chair of the selection committee, emphasizes. “They’ve all done incredible work and should be proud to reach this stage.” 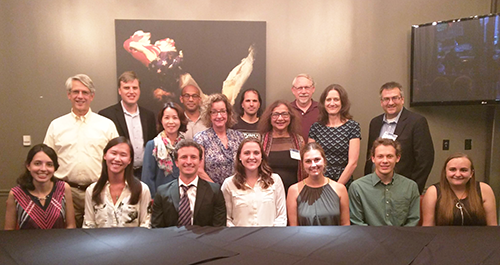 The finalists each had thirty minutes to present their undergraduate research, display their expertise in the field, and clarify their direct contributions to the research. The selection committee then had fifteen minutes to question the presenters.

Bluvstein kicked off the selection meeting with a showcase of his work on quantum coherence in solid-state spin systems for applications in quantum sensing. Khain then discussed her contributions to plotting the orbit of objects within the Kuiper belt at the edge of the solar system and her investigations of evidence for a ninth planet.

Continuing in astrophysics, Qin presented a new formalism for characterizing gravitational waves using pulsar timing arrays and astrometry, allowing the measurement of properties beyond the capabilities of interferometers like LIGO. Zundel rounded out the finalists from PhD granting institutions with a presentation on her research of periodic arrays of nanostructures that has many practical applications, such as ultrasensitive biosensing.

After a break for lunch, Churchman was first up to share her journey in nuclear physics as part of the National Science Foundation Research Experiences for Undergraduates program. She also discussed her contributions to physics at her home institution which include building a muon detector for the physics department and participating in outreach activities. Cook, who also does nuclear physics research, came next to present her experimental work aimed at measuring low energy nuclear cross sections using internal confinement fusion, which involved building her own target chamber for testing the behavior of gas.

The two winners, which were selected by a ten-member committee of physicists from a variety of fields, will be announced in September.

For more on the APS LeRoy Apker Award, which is made possible through an endowment donated by Jean Dickey Apker, visit the Apker Award page.