The majority of legislation introduced into Congress never reaches a committee hearing. But that wasn’t the case with H.R. 36—the Combating Sexual Harassment in Science Act of 2019. Within seven months, the bill went from being introduced in the House to passing the full chamber in July. The APS Forum on Graduate Student Affairs (FGSA) and staff in the APS Office of Government Affairs (OGA) contributed to that terrific outcome by partnering with APS members across the country to contact congressional representatives about the legislation.

“The passage of the House bill is a success on a path that requires continued attention and measures to reach a level of zero percent of individuals being harassed. By creating a working group within the National Science Foundation to collect the data and develop a mechanism for combating sexual harassment, the bill will provide foundational work that is needed to achieve the zero-percent harassment goal,” said FGSA Chair Tiffany Nichols (Harvard University). 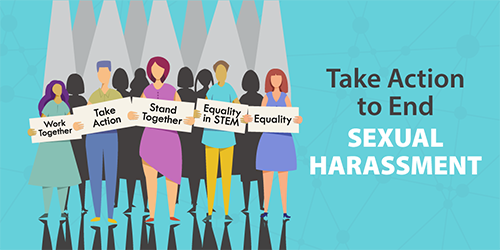 She added, “The bill also creates a similar mechanism in the National Science and Technology Council that will focus on governmental science agencies. I believe all this is a step in a positive direction toward creating safe, diverse, and equitable environments where everyone can thrive and not have to worry about sexual harassment in the workplace.”

Callie Pruett, APS Grassroots Advocacy Associate, said she, too, was thrilled about the bill’s success in the House.

“APS OGA is proud of this success, and it was wonderful working with FGSA on our first sustained grassroots advocacy campaign,” she added. “It went on for 12 weeks, and it gave us time to target our message. It will serve as a model for future campaigns.”

Key highlights of the campaign include the following:

“This is a moral issue—one that demands action to ensure women have equal access to their career of choice. It is also an issue of our economic and national security. The public investment in research needs to draw on all of our nation’s talent to return the best possible science for the benefit of society. To reach this goal, we must do more to ensure that all researchers have access to a safe work environment. It does no good to invest in programs to encourage more young girls to pursue STEM studies if they end up in a research environment that drives them away,” she said.

Nichols said FGSA members enjoyed their experience working with OGA on the campaign.

“OGA has extensive experience in influencing national policy that physics, and more generally, STEM fields can benefit from. Additionally, OGA is attentive to the pulse of its constituents—APS members, the physics community, and the larger STEM field, so it is in a position to organize effective grassroots campaigns that yield positive results,” she said.

Nichols added, “FGSA looks forward to working with OGA on future campaigns when they fall within the purview of enhancing the experience of graduate students in physics and related fields.”

The successful partnership between FGSA and OGA serves as an excellent example of how OGA strives to ensure that APS members have their voices heard in science policy arena.

“We understand that the best campaigns involve our helping APS members make contact with their congressional members, so they can influence policy decisions that are important to advancing not only physics but the entire scientific enterprise,” said Francis Slakey, APS Chief Government Affairs Officer.

The work toward getting H.R. 36 enacted into law is unfinished, and APS OGA will continue to aim for the goal.