Schrieffer was responsible for a critical component of the theory: defining the BCS wavefunction. For his work, Schrieffer—the “S” in BCS theory—shared the 1972 Nobel Prize in Physics with John Bardeen and Leon Cooper, and was later awarded the National Medal of Science. Schrieffer was a fellow of the APS and its president in 1996.

“He was the real discoverer of BCS,” said fellow Nobel laureate Philip Anderson (Princeton University). “He took Cooper’s pairs and made a real theory out of it.”

For decades after superconductivity was discovered by Heike Kamerlingh Onnes in 1911, a mechanism remained elusive. Felix Bloch proposed an explanation, but after his first theorem failed, he proposed his now-famous second theorem: "every theory of superconductivity can be disproved." Schrieffer’s work on BCS theory not only solved this supposedly intractable problem in condensed matter physics, but opened the way to a host of applications in other areas of physics. 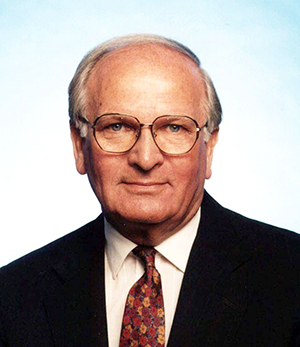 “The BCS theory of superconductivity may well be the most important piece of theoretical condensed matter physics ever,” said Steven Kivelson, a condensed matter theorist at Stanford University, and formerly one of Schrieffer’s postdocs.

He began attending MIT in the fall of 1949 and spent two years studying electrical engineering before switching to physics. Schrieffer graduated and went to the University of Illinois, Urbana-Champaign where he studied under John Bardeen. He was only a third year graduate student when he completed his Nobel-winning work.

According to legend, he was inspired while taking the subway to a conference in New York City. In Schrieffer’s understated own telling, the crucial discovery was less momentous.

“So I guess it was on the subway, I scribbled down the wave function and calculated the beginning of that expectation value, and I realized that the algebra was very simple,” he said in a 1974 oral history.

BCS theory proposed that at sufficiently low temperatures, electrons would pair up with one another, behaving not like fermionic matter, but like bosons. The energy required to break the pairing being greater than the thermal energy, electrical resistance was predicted to disappear—a key feature of superconductivity.

For the first few years, many other theoretical physicists doubted this solution. But by 1961, when Bascom Deaver and William Fairbanks discovered that a superconductor quantized the magnetic field—a prediction of BCS—there was no doubt as to the validity of the theory.

Although Schrieffer’s seminal work was done at a young age, he continued to make important contributions to physics. Notably, Schrieffer also worked on solitons in materials like plastic polymers.

“This was the beginning of two important prongs in condensed matter physics that we've seen blossom into major fields,” said Kivelson. Schrieffer’s work on solitons was among the first efforts to investigate fractionalized charge and how topology affects electronic properties in matter.

In the early 1990s, Schrieffer became interested in high-temperature superconductivity, and moved to Florida to head the National High Magnetic Field Laboratory. According to friends and colleagues, Schrieffer, who was bipolar, began to behave manically around this time. He refused to take medication for his condition and acted erratically at conferences.

Schrieffer’s health continued to worsen. In 2004, he fell asleep while driving and crashed, killing one and injuring seven others. He spent two years in prison and never returned to physics.

Students and colleagues, though, remembered him fondly. In leadership roles, notably as director of the then-Institute for Theoretical Physics in Santa Barbara, he became well-known as a mentor.

“Bob was the best mentor you could possibly imagine. Kind, supportive, encouraging, and critical when necessary,” said Kivelson.

“He explained complicated ideas in a very lucid and transparent fashion full of physical intuitions,” said Wu-Pei Su, a physicist now at the University of Houston and former student of Schrieffer.

Sometimes, he taught through experience. The night before Doug Scalapino’s first speech at a conference, Schrieffer coaxed him to say just a few words into the microphone. Scalapino, then Schrieffer’s graduate student, reluctantly assented to the strange request. As soon as he spoke, a deafening echo came back due to the auditorium’s bad acoustics. The next day, Scalapino was prepared. Schrieffer didn’t need to say a thing.

“He was a remarkable man,” said Scalapino. “He certainly knew what he had done and what he could do. Perhaps, for those reasons, he was very careful with how he interacted with people, and was just a marvelous human being.”