Coal and oil were the fuels for industrial and technological development in the 19th and 20th centuries, but the world might have looked very different if “gas voltaic batteries” had dominated instead. It was a Welsh judge and scientist named Sir William Robert Grove who invented a battery that turned hydrogen and oxygen into electricity and water. Science historians generally deem his invention to be the first bona fide fuel cell.

Grove was born in Swansea, Wales, to a local magistrate. He was privately educated before attending Brasenose College at Oxford University, where he studied the classics, graduating in 1832. He became a lawyer in 1835, but his scientific interests led him to join the Royal Institution that same year. He wrote his first scientific paper on his honeymoon in 1837, proposing a new voltaic design for electric cells. It was published in October in the Philosophical Magazine and Journal of Science.

In his paper, Grove noted presciently, “it seems probable that at no very distant period voltaic electricity may become a useful means of locomotion, the arrangement of batteries so as to produce the greatest power in the smallest space becomes important." Indeed, the German engineer Moritz Hermann von Jacobi used an array of Grove cells to power a boat on a river in St. Petersburg shortly thereafter.

The Grove cell used zinc and platinum in dilute and concentrated sulfuric acid, respectively, to generate a strong current, which made it a favorite for powering the fledgling telegraph industry. But as the technology became more widespread, Grove cells turned out to also emit a poisonous gas—an occupational hazard for operators working in offices filled with rows of Grove cells. The telegraph industry also needed constant voltage, and Grove cells depleted quickly, so his invention was eventually displaced by better alternatives.

At the dawn of the 19th century, two British scientists—William Nicholson and Anthony Carlisle—had written about how to use electricity to turn water into hydrogen and oxygen. Grove’s insight was to run the process in reverse with platinum electrodes, a material that catalyzes the recombination of oxygen and hydrogen. He put the platinum electrodes in containers of oxygen and hydrogen each immersed in a bath of sulfuric acid to form a single cell, then wired several cells in series to make what he called a "gas voltaic battery.” 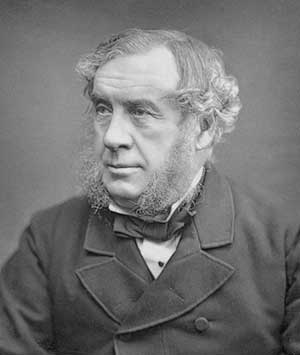 In October 1842, Grove wrote a letter to Michael Faraday at the Royal Institution about his invention. "I have just completed a curious voltaic pile which I think you would like to see," he wrote, and went on to describe an instrument that was "composed of alternate tubs of oxygen and hydrogen through each of which passes platina foil so as to dip into separate vessels of water acidulated with [sulfuric] acid. With 60 of these alternations I get an unpleasant shock..." He subsequently published an 1843 paper in the Philosophical Magazine and Journal of Science, offering details of the thirty experiments he conducted with the cells, “all with the same general result.”

Grove must have been especially pleased, since the gas battery provided evidence for his fledgling theory of the correlation of physical forces—a precursor to our modern concept of conservation of energy. He published an essay describing his theory in 1846, arguing that “heat, light, electricity, magnetism, chemical affinity, and motion, are all correlative, or have a reciprocal dependence,” and therefore, “either may, as a force, produce or be convertible into the other, this heat may mediately or immediately produce electricity, electricity may produce heat; and so of the rest." But Grove never fully developed his theory qualitatively. That achievement fell to Hermann von Helmholtz in 1847, building on earlier work by James Prescott Joule and William Thomson, among others.

Grove also invented one of the first incandescent lightbulbs and collaborated with John Peter Gassiot on photography, notably daguerrotypes and calotypes. “It would be vain to attempt specifically to predict what may be the effect of photography on future generations,” he wrote for the London Institution in 1842. “A process by which the most transient actions are rendered permanent, by which facts write their own annals in a language that can never be obsolete, forming documents which prove themselves—must interweave itself not only with science but with history and legislature.”

Grove’s interest in invention led to him specializing in patent law, including photography patent disputes, and unsuccessfully represented William Fox Talbot in a suit over his calotype patent. He was named a judge of the Court of Common Pleases in 1871 and was by most accounts a good and fair one. However, Grove was reportedly prone to become distracted by the technical minutiae of such disputes, peppering litigants with questions about how they might improve their inventions and occasionally suggesting improvements himself. He was knighted in 1872. Grove retired in 1887 and died at home in London nine years later.

Morus, I. “How a Victorian lawyer from Wales invented the hydrogen fuel cell,” The Conversation, (October 27, 2017).