The Royal Swedish Academy of Sciences has announced the winners of the 2019 Nobel Prize in Physics, recognizing both theoretical and experimental contributions to understanding the universe. This year, the prize is awarded to APS Fellow James Peebles (Princeton University), Michel Mayor (University of Geneva), and Didier Queloz (University of Geneva; University of Cambridge).

Half of the prize is awarded to Peebles for his theoretical insights into physical cosmology that have impacted the trajectory of cosmology research for the past 50 years and form the basis of the current ideas about the universe. The other half of the prize is awarded jointly to Mayor and Queloz for the first discovery of an exoplanet orbiting a solar-type star in the Milky Way in 1995.

"APS and I are delighted that our colleague James Peebles has been awarded the 2019 Nobel Prize in Physics," said APS President and Nobel Laureate David Gross. "Jim is among the fathers of physical cosmology that laid the foundation for the now remarkably successful standard theory of the structure and history of the universe. His many contributions developed the observational consequences of Big Bang theory, calculated the distribution of elements in the universe, and developed the tools that enabled the observation of the cosmic microwave background radiation to test Big Bang theory and measure the properties of the universe.”

Peebles receives the Nobel Prize for his decoding of the cosmic microwave background, left behind by the Big Bang, which provides insight into the infancy of the universe. He laid the theoretical framework, beginning in the mid-1960s, that led to our current understanding of the shape of the universe and its curious makeup of visible matter, dark matter, and dark energy.

"This year's Nobel Prize recognizes remarkable advances in cosmology and extrasolar planetary science," said APS CEO Kate Kirby. "The pioneering work by Jim Peebles, Michel Mayor, and Didier Queloz has had far-reaching consequences in many areas. We are especially proud of the fact Dr. Peebles is an APS Fellow and longstanding member of APS. We congratulate all the laureates on this well-deserved award." 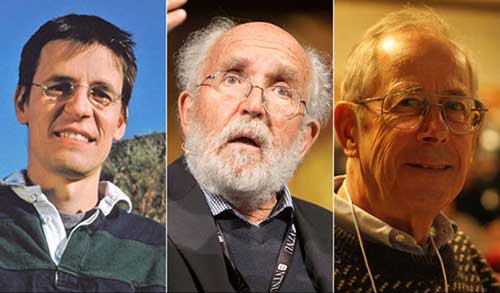 Mayor and Queloz share the other half of the prize for their discovery of an exoplanet that challenged preconceived notions about planetary systems and jump-started a revolution in astronomy, leading to the discovery of 4,000 additional exoplanets. The planet they discovered, 51 Pegasus b, defied previous ideas about how a large planet, similar to Jupiter, should behave, opening the door to new ideas on where to look for other exoplanets.

"This discovery revolutionized our understanding of planetary science, led to the discovery of thousands of exoplanets, and spurred the search for extraterrestrial life in the universe," said Gross.

The Nobel Prize, first awarded in 1901, is widely considered the highest honor in science, economics, and literature. The 2019 Nobel Laureates will be awarded medals at a ceremony in December, along with 9 million Swedish krona (just over $US 1 million), half of which goes to Peebles, and the other half shared by Mayor and Queloz.

The following relevant articles have been made free-to-read by APS: