When students struggle to solve challenging physics problems, they often respond in one of two ways. Some question whether they have what is needed to excel in physics. Others enjoy the struggle because it means that they are tackling new physics and learning. The negative reaction is a manifestation of a fixed mindset (i.e., believing that intelligence is immutable and struggling is a reflection of a lack of intelligence), whereas the positive reaction is the sign of a growth mindset (the fact that your brain’s capabilities can grow with deliberate effort and you can become an expert in a field by working hard) [1].

Unfortunately, societal stereotypes [2] can have a detrimental psychological impact on women and ethnic and racial minority students who are severely underrepresented in physics [3-13]. They are more likely than majority students to fall prey to the fixed mindset trap and view their struggle with challenging physics problems in a negative light. This is not surprising because compared to any other STEM field, the societal stereotypes are the strongest in physics, a field whose history is often told through the stories of brilliant men. These stereotypes contribute to a lower sense of belonging for women and racial and ethnic minority students in physics learning environments [3-13].

To help players excel in any game, such as tennis, coaches must ensure both good defense and offense. Likewise, helping students learn physics well requires that instructors equip all students with both defensive and offensive strategies. In particular, instructors should consider strengthening students’ defenses by creating learning environments where all students have a high sense of belonging, promoting and emphasizing a growth mindset, and ensuring that all students have the internal drive to excel in physics. Only if students have strong defenses pertaining to physics learning can they effectively engage with the offense, that is, by tackling challenging problems and developing physics problem solving, reasoning, and meta-cognitive skills.

Students with weak defenses are unlikely to risk struggling with challenging physics problems. Without strong defenses, tackling challenging physics problems can collapse a student’s "wavefunction” into a state in which the outcome is negative and the student thinks: “I am struggling because I do not have what it takes to do well in physics. What is the point of even trying?” These kinds of negative thoughts can lead to a lack of engagement, even with effective approaches to learning physics, and can increase students’ anxiety. 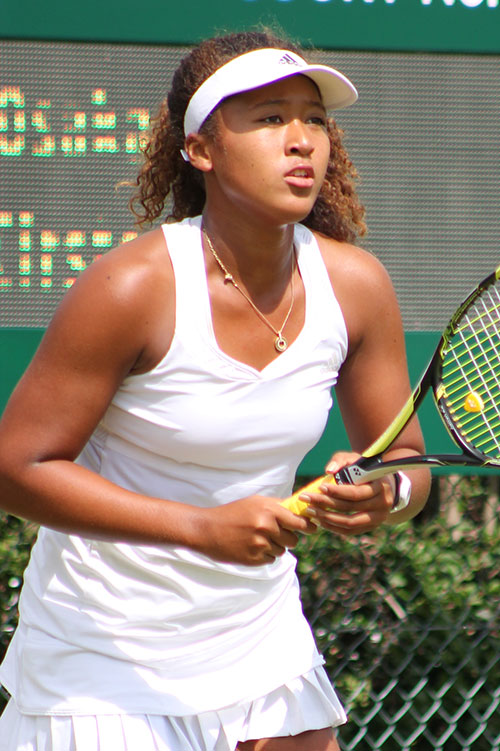 The challenges of becoming a physicist can be overcome with a mindset like that of tennis star Naomi Osaka, who said she would fall on her "face 18 million times and [get] up 18 million times."

This, in turn, can start a detrimental feedback loop in which negative thoughts about struggling lead to increased anxiety, procrastination, disengagement from effective learning approaches, and failure to take advantage of resources for learning. Moreover, anxiety robs students of the cognitive resources while taking tests. Performance deteriorates, which can then lead to further negative thoughts and anxiety. Having been bombarded by societal stereotypes and biases from a young age [2], women and ethnic and racial minority students are less likely than majority students to have strong defenses when they enter physics classes. Therefore, if the instructor does not make a concerted effort to bolster student defenses and inoculate students against stereotype threats (i.e., fear of confirming a negative stereotype about one’s group), the situation is more likely to hurt women and minority students [2].

Fortunately, instructors and advisors can empower students and reinforce their defenses by creating an inclusive and equitable learning environment. With proper coaching, all students can have a high sense of belonging, be unafraid to struggle and fail, and use their failures as stepping stones to learning [14-16]. Although physics instructors have traditionally not considered it to be their responsibility to serve as coaches for their students, these issues are central for equity and inclusion in physics. Moreover, short classroom activities that take less than a class period at the beginning of the course can go a long way in improving students’ sense of belonging and confidence, particularly for those who need it the most [14-16].

We implemented a short intervention that shows great promise toward these goals [14]. Implementation could hardly be simpler, and only requires half of a single recitation class period at the beginning of the semester. Our exercise was conducted in a required introductory calculus-based physics course, which is taken by physical science and engineering majors typically in their first year first semester in college. Two female physics graduate students were trained to facilitate the half-hour activity at the beginning of the semester in half of the recitations that were randomly selected. The facilitators introduced it as an activity that would help the physics department understand student concerns and how to foster better learning environments.

At the beginning of the first recitation class in which the activity took place, students were handed a piece of paper and asked to write down their concerns about being in the physics course. Then they were shown some quotations from both male and female students from previous years who did very well in physics but also had similar concerns. The quotes emphasized the importance of working hard and working smart, learning from one’s mistakes, and taking advantage of all of the learning resources, because that is the way to perform well in physics.

Then students were asked to get together in small groups to discuss what they wrote; during this session, they generally learned their peers in the class had similar worries. A general class discussion followed in which the groups summarized their discussions, with explicit emphasis on the fact that adversity is common in college physics courses, but it is temporary. The facilitators re-emphasized that students should embrace challenging physics problems and use their failures as bridges to learning. Finally, using the principle of “saying is believing” [15], students were asked to write a short letter telling a future student about strategies for excelling in their physics class.

Such a mindset is exemplified by tennis player Naomi Osaka who, just after winning the US Open in 2019, proclaimed on Twitter that she might “fall on my face 18 million times and I’m gonna get up 18 million times. Just wanted to say I’m probably gonna fall down a couple dozen times in the future but hey, the kid is resilient.”

Without improving students’ defenses, it is impossible for them to use their cognitive resources appropriately and excel in physics. Physics instructors should consider activities similar to the one we implemented [14] that strive to create classrooms that are inclusive and equitable and give all students an opportunity to develop a solid grasp of physics. Last but not least, it is important to remember that the authenticity and credibility of the facilitator of the activity (e.g., instructor or teaching assistant) is extremely important for students to trust the message underlying the activity and benefit from it.

Chandralekha Singh is a professor in the Department of Physics and Astronomy at the University of Pittsburgh. She is a former chair of the APS forum on Education and is currently the President-Elect of the American Association of Physics Teachers.

[12] M. Good, A. Maries, and C. Singh, "Impact of traditional or evidence-based active-engagement instruction on introductory female and male students' attitudes and approaches to physics problem solving," Phys. Rev. PER 15, 020119 (2019).

[14] K. Binning et al., "Changing social norms to foster the benefits of collaboration in diverse workgroups," unpublished manuscript, on the web at d-scholarship.pitt.edu/36006/.