Exploring Collaboration and Competition at the APS International Leadership Forum

The APS Leadership Convocation has in past years brought leaders from APS membership units together to connect with APS as an organization, but this year the meeting took on a new name—the Annual Leadership Meeting—and featured a brand-new event: The International Leadership Forum. The added day offered an opportunity to welcome prominent science leaders from around the world to discuss important policy issues faced by the physics community and society as a whole.

The International Leadership Forum was created to help address challenges laid out by the APS Strategic Plan: 2019 involving the support of robust scientific research through advocacy and shaping science policy, especially policy that could impact international collaboration. The keynote speakers for this year's event were: Nobel Laureate and Former US Secretary of Energy Steven Chu, Director of the Caltech LIGO Laboratory David Reitze, and University of Maryland Professor Christopher Monroe, co-founder and Chief Scientist at IonQ. Two panels, one focused on international collaboration and the other on international competition, featured prominent scientists with strong ties to international science policy.

Chu, now the William R. Kenan Jr. Professor of Physics and Professor of Molecular and Cellular Physiology at Stanford University and President of the American Association for the Advancement of Science, kicked off the International Leadership Forum with a keynote address titled “Rising Above the Gathering Storm: Open Science and Intellectual Property." The storm that Chu refers to is the growing concern about competition from other countries, notably China, and how over-reaction to that concern can harm US fundamental science.

A major aspect of this “storm” is increased worry from Congress that basic research secrets will be stolen from the US and used by China to quickly jump ahead with new products and innovations. In order to combat these issues and “rise above the storm,” Chu advocates for a similar approach to that of the 1950s Sputnik era: rather than taking a strictly defensive and isolationist approach to international competition, Chu says the US should respond by directly competing to out-pace other countries in innovation. “The proper response to Chinese investment [in technology] is to make ours even better,” said Chu.

In his plenary talk, Reitze provided an example of the potential of international collaboration in the success of the Laser Interferometer Gravitational-Wave Observatory (LIGO) and its ground-breaking detection of gravitational waves. His presentation, “Detecting Gravitational Waves: The Role of Large International Collaborations” detailed the process of developing LIGO, its subsequent discoveries, and the collaborative spirit that made these discoveries possible. As a collaboration made up of more than 1300 scientists representing 18 countries, LIGO serves as a model of what can be accomplished with international cooperation. 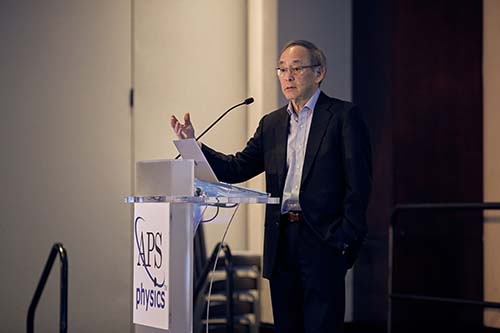 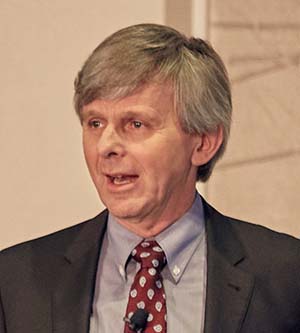 The LIGO effort originally came together in 1997 as a self-governing collaboration with no barrier to entry. That culture of openness has continued, as members of the collaboration value “cooperation over competition,” according to Reitze. LIGO faced the same challenges as other large-scale international collaborations, from scientific and technical issues to sociological and cultural differences, but a system of robust conflict resolution kept LIGO together. “Overcoming these challenges requires diligence, patience, understanding, self-sacrifice, and dogged persistence,” said Reitze.

Each panelist was able to offer a unique perspective on various facets of international collaboration, extending beyond the issues that specifically impact the United States. Like Chu, VijayRaghavan sees potential for scientific collaboration to be ignited by issues like climate and energy that exist on a global scale. A major theme of the panel discussion that emerged was the importance of restoring trust in science and improving efforts to communicate about science to the general public and policy makers.

The second half of the day changed focus from international collaboration to international competition. Monroe is no stranger to competition in the developing field of quantum information science (QIS)—an area he called “competition on steroids.” Large tech companies, like IBM and Google, are racing to create larger and better quantum computers, and the spirit of competition also extends internationally due to the potential applications of quantum systems in bolstering national security and facilitating economic growth.

At IonQ, Monroe says they have built four quantum systems using trapped ion qubits, and the next challenge is figuring out how these systems can be realistically applied. The two largest areas of interest are encryption and optimization problems. Encryption, which can impact national security, has drawn investment in quantum computing from various government agencies, but according to Monroe, using quantum systems for optimization—likely providing a boost to the economy—is becoming the more popular application and thus is changing the agencies that are investing in the technology.

A central tenet of the panel discussions wasn’t the competition for technology or ideas, but the international race to attract the best and brightest minds—a competition some panelists fear may be impeded in the US due to visa constraints on students from countries like China. When it comes to competition within research, Hecker, a former director of Sandia National Laboratory, advocated for a balance between keeping essential research secret, but creating an environment in which the right people can be gathered to look at crucial problems. In the case of large global issues like climate change or nuclear reactor safety Hecker adds, “maybe it’s not so bad if some of our methodology is stolen.”