The CUWiP Experience at Yale

On a blustery Friday afternoon in January, nearly 200 undergraduate women seeking degrees in physics arrived at the Sloane Physics Laboratory on the Yale University campus, full of excitement for the coming weekend. Over the next two days, attendees would have the chance to network with their peers, hear from accomplished women in physics, and gather resources for their future physics careers.

Yale was one of 13 regional sites hosting undergraduate students from January 17 to 19 for the Conferences for Undergraduate Women in Physics (CUWiP), an annual event that provides a professional conference experience, information about graduate school and careers, and networking opportunities.

As students trickled in on the first day of the conference, they were greeted by Yale student volunteers and taken on tours of the world-class research facilities at the Yale Quantum Institute and the Wright Laboratory. A hands-on workshop at the Wright Lab taught students the basics of particle detectors as they built their own light-sensing micro-detectors.

Yale professor Meg Urry—the first woman to have a tenured position in the department of physics at Yale—officially opened the conference with a welcome address, remarking on the status of women in physics and the need for diversity and equity in the field. Urry was followed by the first plenary speaker of the conference: Melissa Franklin, a member of the ATLAS detector collaboration at CERN, the first woman to receive tenure in the physics department at Harvard, and co-discoverer of the Higgs Boson and the top quark. 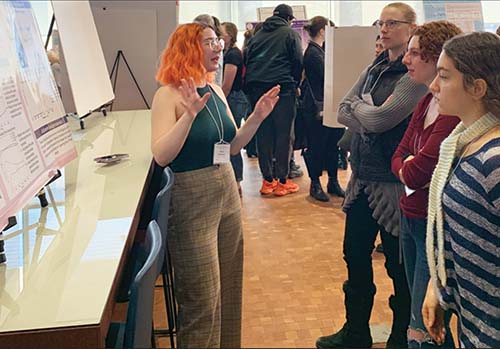 Undergraduate women at a poster session at the Yale CUWiP conference

Franklin kicked off the plenary by introducing her physics role model, Nobel Laureate Maria Goeppert Mayer, a pioneer for women in physics who Franklin describes as “a smoking, drinking desperado.” Franklin’s talk was peppered with humor, describing Goeppert Mayer’s career as a theoretical physicist, how Goeppert Mayer asked questions that continue to shape particle physics today, and sharing her own perspectives on being an experimentalist.

To start the morning on day two, a panel titled “This is How I Got Here” featured five women in physics with different backgrounds and career paths: Ágnes Mócsy, a Professor of Physics and Astronomy at the Pratt Institute in Brooklyn, NY, who studies the intersection of science and art; Alia Jackson, who teaches physics at Curtis High School in Staten Island, NY and is also an Adjunct Professor at the College of Staten Island; Sophia Suarez, an Associate Professor in the physics department at Brooklyn College in the City University of New York and former National Research Council fellow; Jacquelynn Garofano, a program manager for the Margaret Ingels Engineering Development Program at United Technologies; and Priyamvada Natarajan, a Yale professor with joint appointments in the Astronomy and Physics departments, and author. The panelists described their own different journeys to find fulfilling careers and provided tips to the students—things they would have told their younger selves.

After a coffee break that allowed attendees to rub elbows with the panelists and ask additional questions, students spent the rest of the morning in different workshops on a variety of physics or career related topics. Opportunities to network and learn more about aspects of physics and careers continued in an informal setting for students to eat lunch, ask questions, and get to know a topic expert. Topics ranged from quantum computing and geophysics to LGBTQ+ in physics to imposter syndrome.

On Saturday afternoon, all 13 conference sites connected virtually for the APS Keynote Address, given by Andrea Liu, a Professor in the Department of Physics and Astronomy at the University of Pennsylvania and Speaker of the APS Council. After an intriguing talk on her work in soft matter theory, Liu answered questions from all sites, giving insight into the challenges of achieving diversity in physics, naming her favorite equations (Maxwell’s—which she described as “beautiful”), and offering an important perspective on physics: “Being able to stand feeling stupid may actually be the key to being successful in research.” She added, “when you finally make a breakthrough, it’s worth it—it’s an incredible high.”

Following a networking fair, the second plenary of the conference featured astronomy and astrophysics researcher Louise Edwards, an assistant professor in the Cal Poly San Luis Obispo Physics department. Edwards took conference attendees on a journey to the stars, detailing her work studying the formation of cluster galaxies and their evolution. She also shared her passion for outreach and encouraging students to go out and get involved in the physics community.

The evening was rounded out by a brief dinner talk from Yale professor Sarah Demers titled "Not a Work-Life Balance Talk." Demers, who served as a faculty advisor to CUWiP at Yale, prefers to not think about having a career and a life as a balancing act, rather she told students “Be centered, not balanced: Know yourself, what you love, and what you care about.”

The final day of the conference brought student research into the spotlight, giving attendees a chance to present their research in either a poster session or a research talk. Nearly 30 students presented posters to their peers, Yale student volunteers, and faculty members. Eighteen students gave 15-minute talks detailing their research in sessions that mimicked the environment of a larger professional conference.

Yale professor and nuclear and particle astrophysicist Reina Maruyama spoke at the third and final plenary, giving a personal talk detailing her journey in physics and her search for physics beyond the standard model as part of collaborations like IceCube and COSINE-100. She closed the session by offering what she called “unsolicited advice” to the attendees, ending with a heartfelt reminder to “be kind to others [and] be kind to yourself.”

At a final lunch breakout session, attendees split into small groups led by Yale graduate student volunteers with different backgrounds for a discussion on the intersection of identity and physics. The closing ceremony featured a short talk highlighting the APS STEP UP program, which is designed to reach high school students and improve the number of women pursuing degrees in physics. Prizes were awarded for poster session presentations and trivia night wins, and Yale volunteers and the local organizing committee were recognized for their hard work to bring together an engaging and exciting CUWiP weekend.

For more information about next year's CUWiP and important application dates, visit the CUWiP page.