The Topical Group on the Physics of Climate

The APS Topical Group on the Physics of Climate (GPC) is a home for scientists interested in the future of our planet and the physics, measurement, and modeling of climate processes. Climate physics encompasses everything from the study of Earth's hydrological and carbon cycles, to statistical analyses of climate models and measurement systems, to the physics of proxies to infer the properties of past climates. The physics of the mechanisms, magnitudes, and timescales by which both natural and anthropogenic processes affect the climate is an area of exceptional interest within this field.

Formed in 2012, GPC exists to promote the advancement of new knowledge on these topics, while remaining entirely within the domain of natural science (and outside the domains of policy, regulation, and legislation that are separately covered by the APS Office of Government Affairs). In some sense, GPC’s founding was prompted by the 2007 APS Statement on Climate Change and a subsequent 2010 Climate Change Commentary (these statements, available at the Climate Change page, are archival and superseded by the 2015 APS Statement on Earth's Changing Climate, available at the Earth's Changing Climate page). These statements urged physicists to participate actively in climate research and help develop technological measures to mitigate climate change. 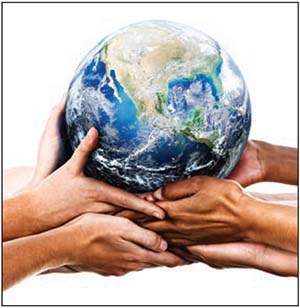 “I want physicists to know that there are lots of challenging and fascinating and important problems emerging with climate change, where their way of thinking has value,” noted GPC chair-elect Mary Silber (University of Chicago). “The idea is for physicists to bring their unique skill set and mind set to the research, as well as to bring their curiosity to the discussions.”

Given this wide scope, GPC has a highly interdisciplinary membership base of more than 400 people. In terms of members’ other affiliations, many GPC members hail from the Division of Fluid Dynamics (DFD) and the Division of Condensed Matter Physics (DCMP, see APS News April 2019). In terms of subject matter, there is also a great deal of synergy with the Topical Group on Nonlinear and Statistical Physics (GNSP).

Amidst international debate over how to address the climate crisis (and in some cases, over-framing climate change as a true crisis), nothing could be more timely than scientific work to refine our understanding of the nature of climate change. According to Adria Schwarber (University of Maryland), the student representative on GPC’s executive committee, one of the topics of highest interest in climate science is narrowing the uncertainty of climate sensitivity, or the amount of warming in the atmosphere associated with increases in atmospheric carbon dioxide. Last August marked the 40th anniversary of the landmark Charney report, which famously estimated that a doubling of atmospheric carbon dioxide would translate to warming of 3 ± 1.5 ℃. As Schwarber explained, “this range in climate sensitivity is remarkably close to the range we estimate today, though we currently have a more detailed understanding of climate change.” Ultimately, narrowing the uncertainty in climate sensitivity is an important step in refining our projections of future warming due to anthropogenic emissions. Silber points out that another very timely topic is the development of approaches to investigating rare events and climate extremes, which have been occurring with increasing frequency in recent years.

GPC will host one invited session at the APS March Meeting in Denver, titled “Predictability of the Climate System.” This session will focus on recent advances toward predicting Earth’s climate from sub-seasonal to decadal time scales, and across transitions and extremes. It will bring together scientists working on a variety of approaches, from dynamical modeling to data mining to analysis grounded in fundamental physical principles.

GPC is also hosting a Thursday evening “climate cafe” at the March Meeting, an informal social event intended to spark further discussion on the physics of climate. In addition, current GPC chair Bill Collins (Lawrence Berkeley National Laboratory) and past GPC chair Chris Forest (Penn State) will be featured in Tuesday’s “Student Lunch with the Experts,” where they will discuss opportunities for physicists in tackling climate change.

Climate science engages not only physicists but also chemists, mathematicians, statisticians, and oceanic and atmospheric scientists, making GPC an important entry-point to APS for researchers with an academic home outside of physics. “The APS March Meeting is off the beaten track for leading researchers in climate science, so it’s exciting to draw them in for a day of discussion with physicists interested in the topic,” noted Silber. Likewise, “we find there is a lot of curiosity about climate research among physicists, especially the young ones worried about the future of the planet.”

Beyond stimulating content at March Meeting, GPC publishes a biannual newsletter with the latest updates in climate science. In contrast to much of the popular science writing on climate science, GPC’s newsletter is tailored to physicists, in a way that fosters appreciation of the results as well as the challenges that climate change poses.

GPC also offers two $500 travel grants to help one graduate student and one early career investigator cover the costs of participating in a GPC-related session at the March Meeting.

Looking forward, the GPC executive committee hopes for continued membership growth and opportunities for engagement between the physics research community and the climate research community. “I would like to see more graduate students and early-career scientists get involved with GPC,” added Schwarber. “It is a small, but dedicated community where every individual can make an outsized impact, including shaping how APS and the broader community relate to climate science.”

Overall, GPC stands out as an exciting interdisciplinary community and a valuable mechanism for physicists to stay connected to the latest climate-relevant research. More information on this unit can be found on their website.

The author is a freelance writer in Stockholm, Sweden