The intricate motion of fluids is notoriously difficult to predict, due to these substances’ nonlinear nature. But physicists can predict whether the flow in a given system should be laminar or turbulent, thanks to an Irish-born physicist named Osborne Reynolds. Reynolds was a pioneer in the study of fluid dynamics, performing an elegant experiment to demonstrate that the critical transition point between the two types of flow could be predicted by one simple number. We now know it as the Reynolds number.

Born in Belfast, Reynolds inherited a love of mathematics from his clergyman father, a headmaster with a mechanical bent who had patented several improved designs for agricultural equipment. Reynolds would later recall how much he benefited from “the constant guidance of my father, also a lover of mechanics, and a man of no mean attainments in mathematics and its application to physics.”

Young Osborne was an apprentice to a shipbuilder, which sparked his interest in fluid dynamics. After earning a degree in mathematics from Queens College, Cambridge, he spent a year working as a civil engineer focusing on sewage transport systems. Then, at 25, he became a professor of engineering at Owens College (now the University of Manchester), where he worked for his entire career.

Engineering was a relatively new field of study at the time. Reynolds was the first professor in the field at Owens College, thanks to a chair established by local engineers and businessmen, who wanted to increase the number of employable young men with experience in science and engineering. Reynolds emphasized math, physics, and classical mechanics in his engineering curriculum, although he apparently had no gift for lecturing. But he was an excellent mentor, according to his mathematics colleague, Horace Lamb: “To his pupils he was most generous in the opportunities for valuable work which he put in their way, and in the share of cooperation.” 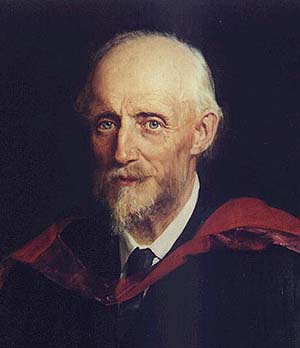 Initially, Reynolds’ research focused on electricity and magnetism, as well as the properties of the sun and comets, but his interests soon shifted to hydraulics and hydrodynamics, where he made contributions to research on rolling friction and hydrodynamic lubrication. He did not have much in the way of laboratory equipment in those early days, so most of his experiments were relatively simple and could be done outdoors or at his home.

He also joined the Manchester Literary and Philosophical Society, then headed by James Prescott Joule, who encouraged Reynolds to present his first paper in March 1870. Reynolds nourished his more pragmatic interests via membership in the Manchester Scientific and Mechanical Society, as well as the Manchester Association of Employers, Foremen, and Draughtsmen.

Reynolds helped improve the design of boilers and condensers with his work on heat transfer and phase transitions between solids and fluids. An 1875 patent for a two-stage steam engine was a milestone in the early history of hydraulic pumps and steam turbines. He even drew on his civil engineering work when he published a short monograph in 1872 on how to keep sewer gases out of homes. The topic proved so popular the monograph went through four editions.

In early 1883, Reynolds performed his classic experiment on fluid flow, investigating different flow rates of water by squirting a jet of dyed water into water flowing through a large glass pipe. There was a control valve at one end of the pipe to allow him to control the velocity. He noted that at low velocities, the layer of dyed water kept its shape as it flowed through the pipe, while at higher velocities, the dyed layer broke apart and diffused through the rest of the water. This was the transition point between what is now known as laminar (smooth) flow and turbulent (disorderly) flow.

Based on those experiments, Reynolds discovered there was one simple predictive number taking into account the relevant physical quantities, namely a fluid’s viscosity, and, in the case of Reynolds’ experiments, the glass pipe’s diameter. He also precisely identified the transition (critical) point: when the Reynolds number is greater than 2000, the flow becomes turbulent, described in detail in a paper submitted on March 15, 1883 to the Proceedings of the Royal Society of London. (A 2011 paper in the journal Science pegged the exact transition value as 2040.)

His more pragmatic research interests included the physics of granular materials, specifically soil mechanics: modeling water flow and sediment transport in rivers. Reynolds published a book in 1903, The Sub-Mechanics of the Universe, which attempted to explain the universe by proposing a liquid-state aether. But the concept of the aether soon gave way to new physics, thanks in part to the Michelson-Morley experiment in 1887, which showed no evidence for the substance.

Reynolds retired in 1905 as his health, and mind, were failing, even though he was still relatively young at 60. He died on February 21, 1912. Lamb remembered him as being strongly individualistic, with little interest in self-promotion and a dislike of academic pretensions. He was somewhat reserved, “occasionally combative and tenacious in debate,” yet still “the most kindly and genial of companions.”

Reynolds, O., “An experimental investigation of the circumstances which determine whether the motion of water shall be direct or sinuous, and of the law of resistance in parallel channels,” Proceedings of the Royal Society of London 35, 84 (1883).