On January 30, APS leaders and invited guests gathered at the historic Willard Intercontinental Hotel in Washington DC to witness the awarding of the 2020 APS Medal for Exceptional Achievement in Research, recognizing contributions of the highest level that advance our knowledge and understanding of the physical universe in all its facets. This year’s Medal was awarded to Myriam P. Sarachik (City College of New York) for fundamental contributions to the physics of electronic transport in solids and molecular magnetism.

For the first time, two other prizes were also awarded at the APS Medal and Prize Ceremony: Norman Yao (University of California, Berkeley) received the George E. Valley Jr. Prize, created to recognize one individual in the early stages of their career for an outstanding contribution to physics. The Julius Edgar Lilienfeld Prize, recognizing a most outstanding contribution to physics, was presented to Joel R. Primack (University of California, Santa Cruz).

APS President Philip Bucksbaum presented Yao with the George E. Valley Prize “for the elucidation of non-equilibrium quantum phases of matter, in particular time crystalline order, and for enabling the realization of these phases in quantum optical systems." In a brief address, Yao described both his research and the previous work that provided the basis for his success, and thanked those influential in his physics career, including his high school physics teacher who was present for the event.

Primack was awarded the Julius Edgar Lilienfeld Prize “for seminal contributions to our understanding of the formation of structure in the universe, and for communicating to the public the extraordinary progress in our understanding of cosmology." He was honored for both his scientific achievements and his contributions to communicating about physics, recognition he extended to his wife Nancy Abrams. In his remarks, Primack emphasized the importance of science in society to effectively influence public policy issues. 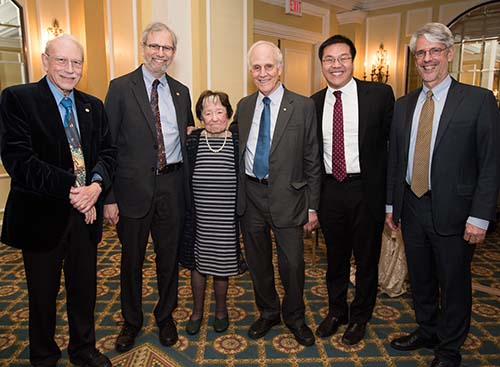 Bucksbaum then introduced Sarachik, presenting her with the APS Medal for Exceptional Achievement in Research. Sarachik is an experimental condensed matter physicist, a member of the National Academy of Sciences, a Fellow of APS, the American Academy of Arts and Sciences, the New York Academy of Sciences, and the American Association for the Advancement of Science. In her remarks, Sarachik recounted the highs and lows of her life and career as a physicist at a time when women were a rarity in the field, from her PhD at Columbia to Bell Labs to her eventual academic home of City College of New York.

Sarachik is the fifth recipient of the APS Medal, which carries a cash prize of $50,000, a certificate citing the contribution made by the recipient, and an invited talk at the APS March or April Meeting. The George E. Valley Jr. Prize and the Julius Edgar Lilienfeld Prize both consist of $10,000, certificates citing the contributions made by the recipient, and invited talks at the March or April meetings.