African American, Hispanic American, and Native American students are underrepresented in undergraduate physics, and APS is working to change that: the National Mentoring Community (NMC) offers these students the support and guidance they may need to succeed and earn their degrees. The NMC matches students with local mentors and helps to facilitate relationships that keep under-represented minority students in physics.

Each year, the NMC holds a conference with resources and workshops for both mentors and mentees, with the purpose of fostering community and empowering mentors with the tools to more effectively support their students. The 2020 NMC conference, held in partnership with the National Society of Black Physicists and the National Society of Hispanic Physicists, took place from February 6 to 8 at the University of Central Florida in Orlando, with more than 120 attendees.

“This conference has been the most valuable part of the NMC experience,” said Alice Olmstead, an assistant professor at Texas State University and an NMC mentor. “It’s so rich and has so many resources for my students to make connections that I can’t provide myself.” 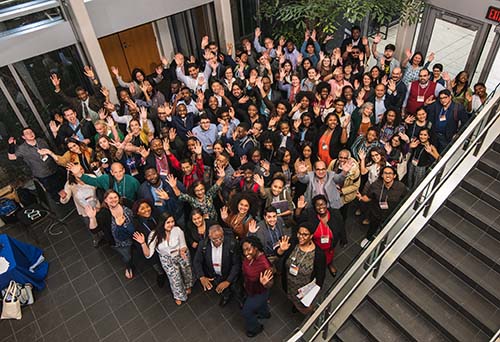 Attendees at the 2020 APS NMC Conference

The first day of the conference offered attendees a tour of Kennedy Space Center, as well as The Historically Black Colleges and Universities (HBCU) and Black Serving Institutions (BSI) Chairs Summit 2020. The HBCU and BSI Chairs Summit convenes physics department chairs to discuss strategies to increase the number of physics bachelor’s degrees awarded to African American students, a mission that matches that of the NMC.

“The number of African American students pursing a Bachelor of Science in physics is decreasing, and this summit brought physics department chairs together to solve this problem,” said Imisi Agbaniyaka, Diversity Programs Coordinator at APS. “A focus of the summit was how to recruit and retain students and provide them with opportunities like research experiences at national labs.”

On the following morning, conference attendees dove into a variety of workshops. Mentors and faculty had workshops on topics such as creating a more inclusive department, advising students about career paths, and how to be a more effective mentor. Students were able to learn about creating effective resumes, hear about the best methods of finding undergraduate research experiences, and get advice on applying to graduate school.

“A highlight of the conference was Nicole Cabrera-Salazar’s workshop on empowered mentoring,” said Agbaniyaka. “She provided insight into the underrepresented minority student experience and tools on how to be a better mentor, like understanding that being a student is a multi-faceted experience.”

Between workshops, attendees gathered for the first plenary session “A Wrinkle in Space Time: Connecting Gravitational Waves and Albert Einstein with Blackfoot Culture.” The speaker, Corey Gray, is a member of the Siksika nation and a lead operator at the Laser Interferometer Gravitational-Wave Observatory (LIGO), who had LIGO’s results translated into Blackfoot, to connect the discovery to Blackfoot culture.

The second plenary, “The Value of Mentoring, Personal Perspectives,” featured three NMC students: Elon Price, Xandira Quichocho, and Dave Austin. The speakers shared their experiences with being a part of the mentoring community and the impact their mentors had on their lives and careers.

A third plenary kicked off the third day of the conference: Tabbetha Dobbins, an associate professor at Rowan University, introduced findings from an American Institute of Physics task force investigating the reasons for persistent underrepresentation of African Americans in physics. The Task Force to Elevate African American Representation in Undergraduate Physics and Astronomy (TEAM-UP) uncovered long-term and systemic issues within the physics community and suggested actionable solutions.

A networking fair followed, and students and faculty had the chance to attend another round of workshops, from bystander training to managing a healthy work-life balance.

For many of the students, the opportunity to spend time with their mentors in a casual setting and to network with their peers at other physics institutions is a crucial part of their NMC conference experience.

“One of the things that helps solidify mentor/mentee relationships are these conferences. They give us the ability to interact outside of an academic setting—it’s a more natural interaction,” said Alexander Vasquez, a physics student at Texas State University who is mentored by Olmstead. “This conference is the most valuable asset in the NMC in my opinion—I get to see other minority physics majors and know that I’m not alone.”

To learn more about the National Mentoring Community, visit the NMC web page.