The Physicists Coalition for Nuclear Threat Reduction—a new project supported by the APS Innovation Fund—has been launched to inform, engage, and mobilize the US physics community around the danger posed by the world’s nuclear weapons.

“The goal is to establish a coalition of informed physicists to advocate for steps to reduce the nuclear threat,” said Stewart Prager, professor of astrophysical sciences at Princeton University, who is leading the coalition. Princeton’s Program on Science and Global Security is coordinating the coalition.

The first step is to hold colloquia at universities, labs, industry, and conferences that will provide an overview of the technological and policy landscape of the nuclear arms issue. Topics to be covered include a review of the current world arsenal, recent developments in new offensive and defensive capabilities, new technologies that alter nuclear strategic stability, and the potential physical effects of the weapons in the arsenal if used.

The policy portion will cover the substantial history of successful key treaties and agreements that have provided some degree of safety for the world, recent troubling changes in the framework of arms control agreements, the emerging new nuclear arms race, and policy steps that can substantially reduce the nuclear threat. 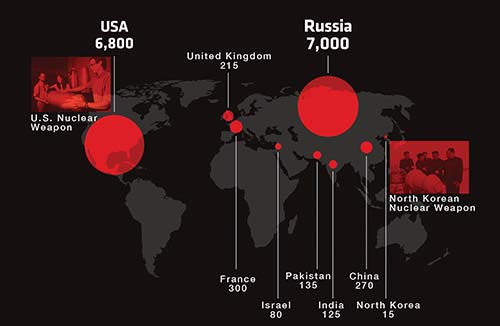 Over 14,000 nuclear weapons in the world today are distributed over nine nations.

A second aspect of the project involves building a coalition for advocacy and education.

“Before we can use the coalition for advocacy and education, we first need to build the coalition. [The colloquia will] lay the foundation for why the coalition is needed. We’ll then have a follow-on meeting at each visit, with a smaller group,” Prager explained.

Prager is working with five other physicists to launch the project: Steve Fetter, professor in the School of Public Policy at the University of Maryland, College Park; and Frank von Hippel, Zia Mian, Alex Glaser, and Sébastien Philippe, all from Princeton’s Program on Science and Global Security. More than a dozen team members from a collection of universities across the US stand ready to present colloquia. Colloquia can be arranged by contacting Prager or team members directly, by visiting the website physicistscoalition.org.

Fetter said he hopes the project will inspire physicists to become more involved in addressing nuclear threats, just as they did when he was in college.

"When I was an undergraduate student in physics in the late 1970s, students were aware of the risks posed by nuclear weapons and the nuclear arms race, and faculty were personally involved in efforts to reduce those risks, perhaps because of the central role physicists played in developing nuclear weapons,” recalled Fetter.

He added, “The risks haven’t gone away—indeed, in some respects they have increased as nuclear weapons spread to more countries and concerns about nuclear terrorism have grown. But physicists are less concerned and involved. I hope our project will raise awareness among both faculty and students, and that the physics community will once again become a leading voice in calling attention to the risks posed by nuclear weapons and in supporting measures to reduce those risks."

While coalition leadership will identify opportunities for advocacy, the APS Office of Government Affairs (APS OGA) will serve in an advisory capacity for the project, providing input to coalition leaders on advocacy topics, including developing target lists of states and congressional districts, as well as messaging materials. A dedicated staffer will support the coalition’s day-to-day activities. APS OGA will also facilitate meetings and provide updates by coalition leaders to appropriate APS committees, and the APS Board and Council.

"This project is dealing with an important area of advocacy that physicists have a notable history of engaging on. Seeing a dedicated team of experts from the community working to rally a new generation to action is inspiring,” said Callie Pruett, APS Senior Strategist for Grassroots Advocacy. “Our office is excited to support this bold initiative and to help build a strong coalition of advocates.”

Pruett noted that APS OGA has had tremendous success working on advocacy campaigns with graduate students, and she believes the nuclear threat reduction project will inspire them to engage on another important issue.

“The more than 9,000 nuclear warheads in the active international nuclear stockpile can destroy civilization many times over,” warned Prager. “The massive nuclear weapon system modernization being undertaken by the United States and Russia and, to a lesser extent by China, France, and the United Kingdom, constitutes a renewed century-scale commitment to nuclear weapons.”

Prager said physicists are in a special position to make a difference in the reduction of nuclear weapons, given their historic role in nuclear arms control.

“Physicists, acting as informed citizens, can be a powerful voice to educate and to promote steps to reduce the nuclear threat. Their voice was exercised during the 1940s when physicists at the very beginning of the nuclear era argued for nuclear arms control, during the 1960s when their message of the ineffectiveness of ballistic missile defense laid the basis for the 1972 Anti-Ballistic Missile (ABM) Treaty, and during the 1980s, when the citizen movement, calling for a freeze to the arms race, helped achieve the basis for the Intermediate Nuclear Force and START Treaties.”

This hard-won treaty-based structure of nuclear restraint and progress toward disarmament is being undone, however, said Prager.

“With the US withdrawal from the ABM Treaty (in 2002) and the Intermediate Nuclear Forces Treaty (2019), the only remaining treaty providing a constraint on Russian and US nuclear arsenals is the New START Treaty which, if not renewed, will expire in February 2021. The world is slipping toward a new and complex nuclear arms race, involving China, as well as the US and Russia,” he said.

Given the complex issues surrounding the reduction of nuclear threats, a multi-pronged approach is needed to effectively address the matter.

“There are many such steps—extension of the New START Treaty, abandonment of a launch-on-warning policy, and implementation of a no-first-use policy, to name a few,” said Prager.

“This is another opportunity for APS OGA to support our members in advocating for an issue that not only affects the lives of Americans, but of those throughout the world,” he said.

The author is the APS Senior Press Secretary.