Fans of Star Trek: The Next Generation revere Captain Jean-Luc Picard (played by Patrick Stewart). The creator of the series, Gene Roddenberry, purportedly based the name on a Swiss scientist and deep sea explorer, Auguste Piccard. But perhaps a more fitting inspiration would have been the 17th century astronomer Jean-Félix Picard, who explored the stars and was especially known for his incredibly precise measurements.

Very little is known of Picard’s early life. He was born on July 21, 1620, in a town called La Fleche in the Loire region of France. His father was a bookseller, and young Jean studied at the prestigious Jesuit college in La Fleche, most likely as a day student rather than a boarder. There was much civil unrest in the region, however, and Picard left in 1644 without receiving a degree to move to Paris. He became a disciple of noted astronomer and mathematician Pierre Gassendi of the College Royale, assisting him with observations of the solar eclipse. He appears to have been largely self-taught after leaving school.

It’s unclear how Picard supported himself during this period, especially after Gassendi moved to Provence in 1648, dying seven years later. Picard took his place as professor of astronomy in Paris that same year, based solely on what was by then a stellar reputation among his fellow scientists—even though he had not yet published a single paper. He was one of the founding members of the French Academy of Sciences in 1666, exchanging correspondence with some of the most famous scientists of the time, including Christian Huygens and Isaac Newton.

When Giovanni Domenico Cassini became director of the newly established Royal Observatory in 1671, one of his first acts was to send Picard to Tycho Brahe’s old observatory at Uraniborg on the island of Hven near Copenhagen. Picard’s mission was to observe and record the times of the eclipses of Jupiter’s moons (those known at the time) from there, while Cassini did the same back in Paris. Picard’s assistant was a young Dane named Ole Romer, who would go on to measure the speed of light based on the timing of the eclipses of Jupiter’s moon Io between March 2, 1672, and April 2, 1673. 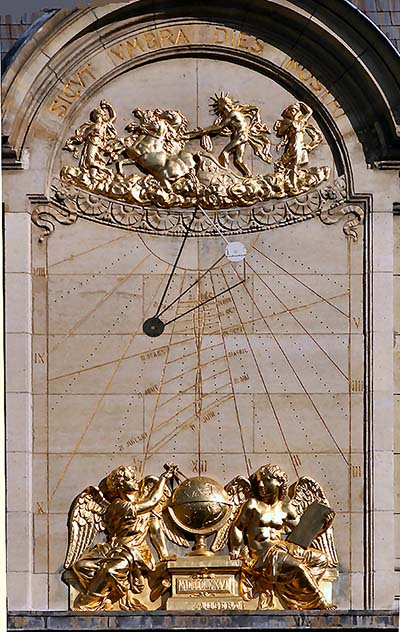 Sundial at the Sorbonne in Paris depicting the work of Jean-Felix Picard.

Picard often carried a mercury-filled barometer with him for his observations, since the apparent positions of stars and planets would be affected by atmospheric refraction, which in turn depends on temperature and air pressure. Towards the end of 1676, Picard noticed a "barometric light" in part of the glass tube whenever it moved sufficiently to make the quicksilver in the bottom juggle. He described “flashes like sparks… a certain flickering light which fills the entire part of the tube where it is void.”

Swiss mathematician Johann Bernoulli demonstrated the phenomenon to the French Academy in 1700, eventually inspiring Francis Hauksbee, among others, to conduct extensive experiments to study barometric light. Newton would later perform his own studies on the visible spectrum of light, ultimately leading to the development of spectrometry.

Hydraulics was another area in which Picard excelled, even figuring out how to supply the fountains of Versailles with water. According to an account by Albert van Helden, “Prodigious engineering efforts went into the solutions to this problem, and Picard’s new leveling instruments with telescopic sights helped determine routes and avoided costly errors.”

But it was Picard’s measurement of the size of the Earth, while surveying one degree of latitude along the Paris Meridien, for which he is most renowned. Eratosthenes was the first to do so in the third century BC by measuring the elevation of the sun on the summer solstice, in two cities. In 1533, Gemma Frisius used the new method of triangulation to measure a long north-south section of a meridian, and Willibrod Snel used it to determine the length of one degree of a meridian arc in 1617.

Snel’s work would inspire Picard to follow suit. In 1665, the new finance minister of France, Jean-Baptist Colbert, not only established the French Academy of Science, but also requesting its members produce a modern, more accurate map of France. Picard took up the challenge, measuring the base line south of Paris between Villejuif and Juvisy with wooden measuring rods.

From there, he triangulated in the northern direction, using a theodolite with a telescope sight fitted with a cross hair—the first to use such an instrument. Picard’s Mesure de la terre was published in 1671. Newton would later use Picard’s value for the size of the Earth in his universal theory of gravitation, acknowledging the French astronomer’s contribution in the Principia.

Picard went on to map the coastline of France with Cassini and Philippe de La Hire, although their results actually reduced the country’s size so much that Louis XIV jokingly lamented that he had “lost more territory to the cartographers than he had ever lost to his enemies.”

Picard died before he could complete the mapping project for France; Cassini took over, and several generations of his family kept the project alive for four generations. Picard is largely unknown outside his native France, although there is a lunar crater named after him, as well as an orbiting solar observatory (PICARD). As van Helden observed in his review of Picard’s lifelong work, “It is now evident just how much modern precision measuring owes to this quiet, unassuming man who stayed out of the limelight.”