Defending My PhD Thesis in the Time of the Coronavirus

Ten years ago I attended the Conference for Undergraduate Women in Physics (CUWiP). Once I returned to my undergrad institution, at Adelphi University, I was ecstatic and eager to do research. This experience led me to become more involved in presenting at conferences and taking a Research Experience for Undergraduates (REU) at the University of Michigan (U of M) that ultimately led me to pursue a PhD at U of M. Little did I know how the completion of my degree would unfold. In March 2020 the entire country was brought into a chaotic state where the number of COVID-19 cases were beginning to spike, businesses were forced to close and people were scrambling to stock up with as many rolls of toilet paper as possible. In the middle of this mess, I only had two more months until my PhD defense.

During my PhD studies, I worked with a home-built femtosecond Ti-Sapphire laser system that was used to create ultrafast pulses for broadband transient absorption (TA) spectroscopy of molecules in the ultraviolet-visible region. This technique involves a two-pulse sequence, where one pulse (272 nm) optically excites and another pulse (250–650 nm) probes the dynamics of the molecules after certain time delays. More specifically my studies explored the initial dynamics involved in vitamin D3 formation in simple skin membrane models during the first 500 picoseconds after excitation. The ultimate goal was to investigate the photochemistry involved in vitamin D3 formation as a function of lipid membrane parameters, such as lipid tail length, hydrogen bonding, and van der Waals interactions.

After restless days and nights of trying to maintain a stable laser system and collect data, I wanted to make my defense day even more memorable. But I never expected that it would turn out like this: it was held in the middle of a pandemic that will forever trigger memories of writing and defending my thesis. Within the months prior to the pandemic, I imagined my defense to be in the fanciest room on campus and I would provide my audience with a chocolate fountain and marshmallows next to an ice sculpture of a vitamin D3 molecule. However, those ideas quickly vanished as the COVID-19 pandemic forced my defense to be held remotely. 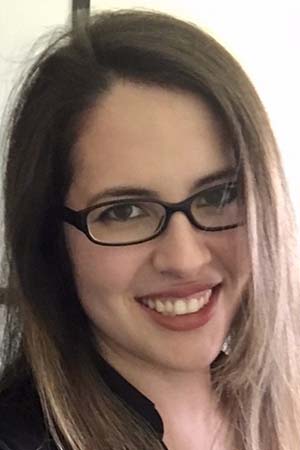 The defense took place through the BlueJeans video conference system. Instead of being in a room filled with curious eyes and chocolate covered mouths, I was in a video meeting where I felt as if I was just talking to my PowerPoint because the meeting screen was too small to display everyone that had their camera unblocked. My camera was also off until the end where I gave the acknowledgments and answered questions. I did this to narrow the connection bandwidth and to secretly refer to notes to each of the slides. The window that showed the meeting sat in the corner of my most current slide, and it blocked some of my figures. With only a single monitor, I was forced to minimize the meeting app while I spoke. My audience listened with their microphones muted to minimize the background noise and did not interrupt during the presentation. Since I wasn’t able to view my audience, the actual presentation felt more like a practice run and it wasn’t until the very last slide, where I gave my acknowledgments that the talk felt like the real thing. While my blocked camera didn’t prevent other computer glitches and new BlueJeans users from sending me permission notifications to switch who shared the screen, it did prevent showing my worried facial expressions when my PowerPoint, for some unknown reason froze multiple times. Since this was actually a real talk and not a practice, the multiple computer glitches made me feel like I was further being initiated into the world of professional physics research.

The grand finale, when I presented the most significant parts of my research also lined up with the time when the Blue Angels, honoring all the front line workers, flew directly over me on their way to Detroit. At the end of the talk, the smiles from friends, family and visual satisfactory nods from my PhD committee were lost as most people just sent “clap“ emojis and other appraisal messages through the chat window. My advisor then asked if there were any questions, the 15–30 seconds of silence felt like an eternity as I patiently waited for someone to ask anything they wanted about my research. My former labmate was the only one that asked a question. The back and forth felt similar to virtually teaching (due to the pandemic) the Math Methods discussion section that I was a Graduate Student Instructor (GSI) for during the past term: trying to answer a question as completely as possible while also trying to figure out who was asking the question. Now, while I didn’t get the room setup that I imagined and lost the visual interaction with my audience, the virtual setup did allow me to invite people from outside of Michigan who otherwise would have not been able to attend.

As I start to close another successful chapter in my career, my future is just as exciting as it terrifying. The COVID-19 pandemic has slowed down my job search and left behind a trail of canceled interviews. However, in these uncertain times I am confident that my future is brighter than the strongest pump laser that I have been working with, ~15 watts of 527 nm light, and that’s VERY bright!

Danielle Sofferman graduated Magna Cum Laude from Adelphi University in 2013. Historically Adelphi’s undergraduate population (~5,000 students) is mostly female (70% as of 2019), however the ratio of female to male students is dramatically switched in the physics department. During the 2013 graduation year, she was the only woman to graduate with a physics degree. She spent more than half of her undergraduate career studying the nonlinear optical properties of cadmium selenide (CdSe) quantum dots. She also collaborated with Eugene Hecht on writing Schaum’s Outline of College Physics, Eleventh edition, where she is acknowledged in the book. As a graduate student in the Applied Physics Program at The University of Michigan, Danielle continued with her passion for optics by working in an ultra-fast spectroscopy lab, researching how the human skin membrane influences the initial photochemistry involved in vitamin D3 formation, where the initial reactions occur on the timescale of picoseconds. She has now successfully completed her PhD in the Applied Physics Program and is searching for her next adventure. (Contact: dnlesoff@umich.edu)