By Christoph Simon and Maria Spiropulu

A functional quantum internet, a network in which information stored in qubits is shared over long distances through entanglement, would change the fields of secure communication, data storage, precision sensing, and computing [1,2]. Innovations in these fields would alter society—for example, we trust that enhanced privacy would strengthen democratic institutions—but building such a network will be a complex task.

A whole zoo of components will need to be developed and integrated, from quantum transducers and quantum memories to classical light sources and classical communication channels [3]. And because of the scale of the potential impact, including challenges and consequences not quite yet thought through [4], the scientific community will need to consult social scientists, legal experts, and historians to ensure that the benefits of this new technology are widely and equitably shared across society.

To achieve these ambitious ends, we believe the quantum science community may have to structure itself differently—to embrace a larger-scale venture with expertise spanning classical and quantum, public and private, hardware and software, science and society. 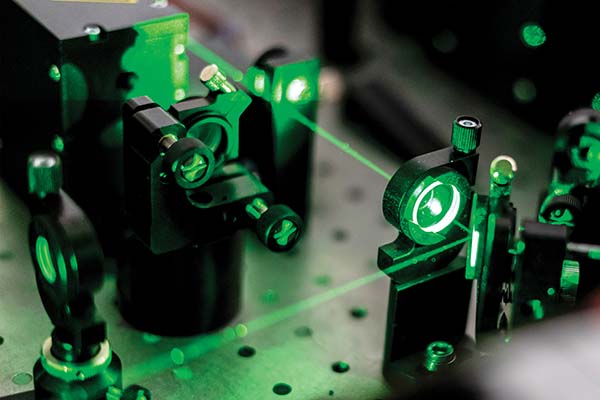 Although the individual components of a quantum internet can be developed on a laboratory bench, assembling a working global network will require international collaboration and a "big science" approach.

A new model for quantum collaboration is needed

We believe it will be a challenge to achieve the necessary level of collaboration and integration within the current organizational model for quantum science and technology, which is focused on individual research groups and relatively small-scale collaborations between such groups. The incentive for individual groups is often to push for improvements or pivot in directions that directly pay off in high-impact publications and further funding. However, the incentives to produce components that are useful for integration into a larger system, which requires central organization and long-term planning, are comparatively paltry.

To give an example from the field of quantum memories, individual groups have often focused on maximizing one specific metric, such as memory efficiency, storage time, or bandwidth without regard to systems-level demands. To build a trans- or intercontinental quantum network—or any large-scale demonstration—will require hundreds of researchers from many groups to coordinate their efforts. This collaborative depth is unlikely even in the large, multi-institution quantum projects such as those in Europe. Joint funding, even on a large scale, is not the same as real collaboration.

In light of these deficiencies in the current funding models, we think that it is time for serious reflection and discussion about how to organize large-scale efforts in quantum networks. While one size is unlikely to fit all, the experience of other research communities, such as high energy physics and astronomy, who went through this type of organizational change decades ago, can provide useful examples and guidance for this process.

What can we learn from Big Science?

“Big Science,” a term popularized by Oak Ridge National Laboratory's then-Director Alvin M. Weinberg, has been used to describe the 20th century’s large-scale and large-scope scientific enterprise. It conjures up the seemingly unending supply of instruments and budgets within large collaborations—collaborations aimed at fundamental science goals that would otherwise be unreachable. The history of nuclear and high energy physics is filled with postwar efforts that required extraordinary financial resources and large, multidisciplinary teams. Today, such projects are also commonplace in astrophysics and cosmology, and modern successes for this model include LIGO’s observation of gravitational waves and the LHC’s discovery of the Higgs boson.

Several fields, including materials science and condensed matter physics, have embraced large facilities (e.g. photon sources such as the Linear Coherent Light Source at SLAC and the Advanced Photon Source at ANL) while maintaining a diverse collection of small experiments. In this model, one big facility generates and provides beams to several projects. Indeed, these big facilities have become critical resources in experimental efforts spanning biology, chemistry, and engineering, to name a few. Industrial researchers also use big facilities to characterize new and better materials, batteries, etc; in this way, the big science of the 20th century is becoming the big “networked science” of the 21st century, wherein small efforts and industry are integrated into a larger facility.

The quantum internet is not benchtop science

While not all problems in quantum science and technology require large collaborations at this stage, building a functional quantum internet is a different type of challenge compared to, for example, building quantum computers. Coordination between many actors is much more important for networks. The incentives are not the same. Quantum computing has clear industrial motivations. In contrast, many of the motivations for quantum networks are societal benefits that may be harder to monetize in the near term, such as enhanced privacy and security. A comparative study of the development of classical information technology strengthens this point. The internet and the World Wide Web originally grew out of public rather than commercial initiatives (ARPANET and CERN, respectively).

Historically, big science approaches have been adopted when exciting common goals are coupled to otherwise insurmountable technical challenges. Even under these conditions, transitions to big science—in high energy physics, astronomy, and elsewhere—have not been trivial. Robert Wilson, the founding director of Fermilab, strongly expressed his unhappiness about the level of bureaucracy that was involved in running big projects [5]. And, as Norm Augustine postulated, “If a sufficient number of management layers are superimposed on each other, it can be assured that disaster is not left to chance.” Yet the high energy physics research community grew supportive (on the whole) of this direction because it recognized that there was simply no other way to achieve its scientific goals.

The quantum internet will be international

The quantum internet is by definition global, so different nations will have to agree on technologies and standards. The network will necessarily involve many different technologies and platforms, so the respective communities must work together starting from the definition of the scientific scope, the goals, the roadmap, the deliverables, the funding profile and all the feasibility demonstrations (such as for example in [6]) needed to address the challenges and build up a functional quantum internet.

In the United States, the NIST-spawned and industry-supported Quantum Economy Development Consortium (QED-C) is charged with enabling the development of a supply chain for quantum devices and systems. QED-C also works to ensure a well-matched boundary condition between industry, national labs, and academia. These functions will be crucial during the current research and development era—and also during the future quantum-tech era.

The degree of private-public partnership needs special attention, building of trust, and addressing issues of conflicts of interest and regulations. This rests on the recognition that science and technology is a driver of long-term economic growth that requires large-scale government investment supplemented by industry.

Making the quantum internet a success

We are convinced that the quantum internet is another example where a big science approach will be needed. The challenge for quantum science communities in different countries is to find ways of organization that are compatible with their systems. In the United States, national labs already have experience in coordinating big science projects involving many institutional partners. It may be possible to leverage this experience for quantum science and, in particular, for the quantum internet. We do note that in the United States, the National Quantum Initiative promotes national collaborations that can form a firm basis for international and global projects and a quantum internet blueprint has been recently published by the Department of Energy [7].

With quantum scientists finding effective ways to work together and integrate cross-disciplinary experts in their efforts, with a large-scale multi-organizational structure (including academia, industry, national labs, and federal agencies) to build a roadmap with a clear science and technology charge, with an entity of authority, responsibility and accountability, and with appropriate resources, the quantum internet can become a major success story in science, technology, and society.

Christoph Simon is Professor in the Department of Physics and Astronomy and the Institute for Quantum Science and Technology at the University of Calgary; he is a full member of the Hotchkiss Brain Institute of the University of Calgary and an expert on long-distance quantum communications. He has been exploring potential applications of quantum phenomena, including the quantum internet, and he is investigating whether quantum physics plays a role in biology, including neuroscience.

Maria Spiropulu is the Shang-Yi Ch’en Professor of Physics at Caltech’s Division of Physics Mathematics and Astronomy and acting Director of the Alliance for Quantum Technologies Intelligent Quantum Networks and Technologies (IN-Q-NET) research program. She is a high energy physics experimentalist with over 25 years research work on hadron collider physics at Fermilab’s Tevatron and CERN’s LHC. In the past five years she developed a program on intersections of HEP with quantum information science and technology and co-founded the Alliance for Quantum Technologies with AT&T in 2017.

[4] See for example the article by Harvard historian J. Lepore on science and technology applications with consequences wildly different from those anticipated at the time of R&D and production. (The New Yorker, January 7, 2019. https://www.newyorker.com/magazine/2019/01/07/what-2018-looked-like-fifty-years-ago).