Unable to meet in person this summer due to the coronavirus pandemic, neutrino physicists gathered online for the 29th International Conference on Neutrino Physics and Astrophysics for eight days between June 22 and July 2.

With registration fees dropped, more than 4,000 people signed up, compared to previous in-person conferences of about 900, according to Marvin Marshak of the University of Minnesota, a co-chair of the organizing committee. Participants dialed in from all seven continents, even Antarctica. “The reach of the conference becomes much larger and more diverse,” he says. “There’s not this barrier of having to spend a few thousand dollars on a hotel, flight, and conference registration fee.”

“Neutrino experiments are one of the few places we have evidence that contradicts what the Standard Model of particle physics tells us,” says physicist Patricia Vahle of the College of William & Mary, the co-spokesperson of the NOvA experiment at Fermilab. One major puzzle is that the Standard Model predicts neutrinos to be massless, but experimental evidence indicates they do have mass. Physicists are working to measure the mass of the three “flavors” of neutrino—the tau, muon, and electron neutrino.

Other talks covered new insights into neutrinos of astrophysical origins, as well as fundamental experiments of neutrinos generated in laboratories such as particle accelerators and nuclear reactors. Astrophysical neutrinos, produced in stellar fusion or other extreme environments in space, are clues to the dynamics of the faraway processes by which they form. Meanwhile, particle physicists study human-engineered beams of neutrinos to measure their fundamental properties.

The Borexino collaboration announced the discovery of neutrinos produced in a previously unconfirmed fusion process in the Sun. The Sun undergoes fusion via two processes to convert hydrogen into helium, one known as the proton-proton chain reaction, and another known as the carbon-nitrogen-oxygen (CNO) cycle. In results currently under peer review, Borexino reported the detection of neutrinos produced in the CNO cycle for the first time, providing the first experimental evidence that the process occurs in the Sun.

To see the solar neutrinos, Borexino’s detector exploits 300 tons of liquid hydrocarbon in a thermally stabilized vat located in Italy’s underground Gran Sasso Laboratory. As neutrinos fly through the liquid, a small fraction of them scatter off electrons to emit light. The team can calculate the neutrinos’ energies and momenta from this light, which in turn points to the particles’ origin.

Because neutrinos hardly interact, they are notoriously difficult to detect. The group used 1,072 days of data collected between July 2016 and February 2020 to announce this discovery with 5 sigma confidence. “This measurement was very difficult because [neutrinos from the CNO cycle] are very rare,” says Gioacchino Ranucci of Italy’s National Institute for Nuclear Physics and co-spokesperson of the collaboration. Exquisitely sensitive, Borexino detects, on average, just 7.2 CNO-produced neutrinos per 100 tons of liquid scintillator per day.

With the CNO neutrino detection, Borexino has now studied all the types of neutrinos produced in solar fusion. In 2018, the Borexino collaboration reported detection of neutrinos from every step of the proton-proton chain reaction, except one rare neutrino, for which they have set an upper limit.

Several groups discussed research into the potential differences between neutrinos and their antiparticles, antineutrinos. As neutrinos are the most abundant particle with mass in the universe, such differences could explain how the early universe produced more matter than antimatter. These discrepancies are known as charge-parity (CP) symmetry violations. “[Whether there are] differences between matter and antimatter is one of the big unanswered questions in science today,” says physicist Patrick Dunne of Imperial College London.

Publishing in Nature in April, T2K has placed the first experimental constraints around the value of this angle. They have excluded certain values of 𝛿CP, and their values suggest it is likely that neutrinos oscillate faster than antineutrinos. “We have to do more work to confirm it, but the values we’re preferring are where CP is maximally violated,” says Dunne, a member of the T2K collaboration.

However, NOvA’s data may suggest otherwise. The collaboration presented results at “minor tension” with T2K, according to Vahle. “NOvA does not see a strong asymmetry in the oscillation probabilities between neutrinos and antineutrinos, so we disfavor combinations of oscillation parameters that would produce a strong asymmetry,” Vahle wrote in an e-mail to APS News. 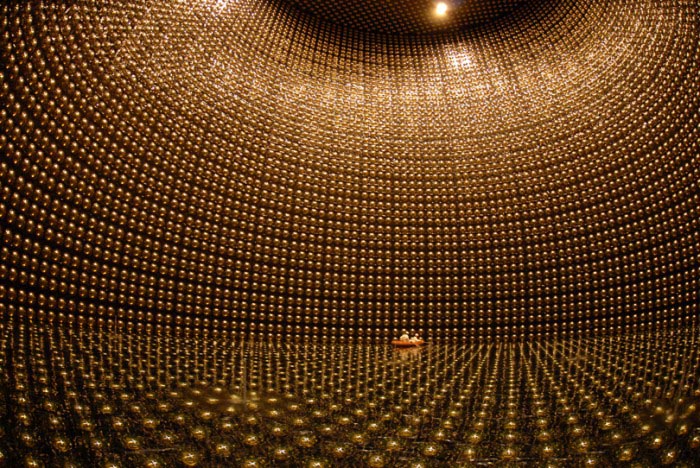 Inside the neutrino detector SuperKamiokande in Japan, which may be superseded by and even larger facility, HyperKamiokande.

The two groups are now collaborating on a combined analysis to try to resolve this tension. To be clear, both collaborations report their results with significant uncertainty. For more precise measurements of neutrino oscillation parameters, the community is working on two upgraded experimental facilities, the Japan-based HyperKamiokande, and the Deep Underground Neutrino Experiment, with a neutrino travel path from Illinois to South Dakota. Both are scheduled to begin taking data in the mid-to-late 2020’s.