The APS Topical Group on Magnetism and its Applications

With nearly 1,300 members, the Topical Group on Magnetism and its Applications (GMAG) is a home for physicists interested in the fundamental physical phenomenon of magnetism, which can be found in a variety of materials ranging from elements, molecules and clusters, to nanoparticles, filaments, films, and crystals.

As GMAG chair Geoff Beach (MIT) put it, the study of magnetism involves a “symphony of different disciplines” from physics to materials science, chemistry, engineering, and even biomedicine. “What brings everything together is the need to understand the physics of spin, how spins interact, and how they couple to materials to give rise to collective behavior,” he explained.

Some of the topics of current interest in magnetism, according to GMAG vice chair Marcelo Jaime (Los Alamos National Laboratory), are the search for a ‘spin-liquid’ state predicted in geometrically frustrated magnetic lattices, magnetic-field induced magnetism in paramagnets, the anomalous quantum Hall effect in topological semimetals, the interactions between magnetic and non-magnetic states of matters, and fermiology, or the study of electronic band structure by observing the response of electrons to external magnetic fields. 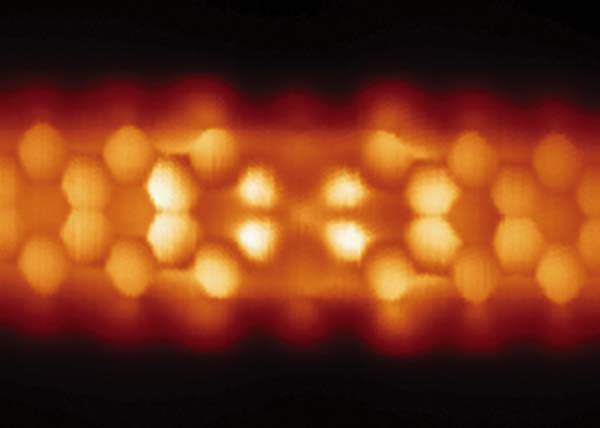 Magnetism plays a role in many areas of physics. This image from the cover of Physical Review Letters shows a graphene nanoribbon in which doping by boron creates a net magnetic moment.

Magnetism also has wide-ranging practical applications. In the clean energy sector, magnets enable turbines to convert flowing wind and water into electricity and are critical to the functioning of electric car motors. As for information technology, the vast majority of the world’s information is stored in magnetic grains on hard disks, and the advent of these materials that are capable of storing data at a stable scale and recalling it efficiently has brought about the information age. In biomedicine, magnetic nanoparticles (MNPs) are used for targeted drug delivery, as contrast agents for magnetic resonance imaging (MRI), and even to target tumors for cancer therapy. In metrology, two-dimensional electronic gases in a magnetic field are used to define the practical standard for electrical resistance by means of quantized Hall effect resistance plateaus, precise to one part in a billion.

Magnetism researchers themselves are as diverse as this array of topics—pursuing theoretical, experimental, and applied work and spanning academia, industry, and national labs.

A point of pride for GMAG is its large presence at the APS March Meeting. Typically, the group sponsors eight focus topics and co-sponsors three. GMAG’s 2021 lineup includes sessions such as Magnetic Nanostructures: Materials and Phenomena, Spin Transport and Magnetization Dynamics in Metals-Based Systems, Spin-Dependent Phenomena in Semiconductors, and Magnetism in Biomedicine. APS has announced that the 2021 March Meeting will be virtual (see the meeting website at march.aps.org).

As a testament to the enthusiasm of this topical group, GMAG chair-elect Julie Borchers (NIST) pointed out that GMAG-organized sessions drew approximately 8% of all submitted abstracts at the 2020 and 2019 March Meetings—certainly impressive for a unit of its comparatively modest size.

According to Jaime, the impact of magnetism at the APS meetings could be viewed as being even broader: “Magnetic properties or behavior are omnipresent in virtually all aspects of physics that take place at the March and April Meetings, often discussed in sessions devoted to correlated electron systems, superconductivity, semiconductors, optics, topological materials, and even astrophysics.”

Within the March Meeting, GMAG holds an annual Business Meeting where GMAG Fellows and GMAG Student Travel Award winners are recognized and where members can network and socialize.

GMAG also makes efforts to engage younger scientists at the March Meeting, holding student-facing membership drives and networking lunches, and providing a platform for students to interact with more senior members of the GMAG community. Notably, at approximately 50%, GMAG ranks among the top APS membership units in terms of student involvement—“a healthy indicator of the status of the magnetism field,” according to Beach.

Looking forward, the GMAG executive committee’s goals for the topical group are two-fold: On one hand, continuing to highlight the diversity that exists within the group in terms of research; on the other hand, working to promote diversity and representation among the group’s membership base.

On the former, the executive committee members underscored the success GMAG has seen to date in bringing researchers together across disciplines. “Through the years GMAG has proven to be very effective in bringing together scientists and engineers with complementary interests in magnetism and shared goals of advancing and disseminating their discoveries,” explained Borchers. Added Beach, “We have a good track record of growth and a good track record of bringing students into the field and highlighting the diversity of areas where we work. My aspiration is to see that grow.”

On the latter, Jaime underscored the lack of diversity in the magnetism field, explaining that there is a need in GMAG for “initiatives with special emphasis on diversity that encourage the active participation of under-represented members of the community as well as the scientist ‘research-force’ of the future.” Indeed, GMAG’s membership currently stands at just over 15% female.

Promoting the importance of magnetism research at the policy level is another major priority for the group. As Borchers put it, “My aspiration is that GMAG expands opportunities for identifying concerns and needs of the magnetism community and then communicating them to policymakers and funding agencies to secure the support and resources necessary to maintain the high level of achievement that is characteristic of this creative field.”

Overall, GMAG stands out as a vibrant and enthusiastic group, promoting research and exchange of ideas at the forefront of a buzzing and interdisciplinary area of physics. More information on this unit can be found at the GMAG website.

The author is a science writer based in Stockholm, Sweden.