APS to Consider Police Conduct in Choice of Meeting Locations

APS has updated its criteria for the selection of future venues for its scientific meetings. Cities in which APS meetings might be held will be asked to report demographic statistics on police use of force, policies on strangleholds and other restraint methods, and the status of independent investigations into instances of deaths while in custody, among other issues.

According to Susan Gardner (University of Kentucky), chair of the APS Committee on Scientific Meetings, the change was primarily in response to a proposal to the Committee by Philip Phillips and Michael Weissman (both at the University of Illinois at Urbana-Champaign)—a proposal based on letters they had published in Science (June 19, 2020) and Physics Today (July 2020). The committee also considered other factors, including discussions at a recent APS webinar "From Passion to Action" hosted by APS President-Elect S. James Gates, Jr.

"We deliberated at length over the proposal and other input during our recent committee meeting," said Gardner. "I would summarize by saying that we became aware that members of our community are vulnerable in ways we had never imagined, and we resolved to act. We voted unanimously to recommend these changes. We want to conduct every APS meeting in a safe environment for our attendees; this is a natural part of our site selection process. These new criteria are a way of broadening the issues to be considered."

On behalf of the committee, Gardner informed the APS Council about the new criteria in a letter, distilled from the Phillips and Weissman proposal: 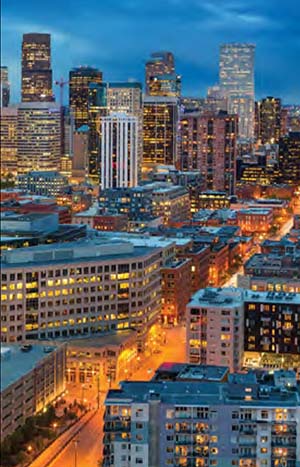 Denver is one of the cities that have responded well to the additional criteria that APS will consider in choosing meeting venues.

We anticipate that the set of criteria will evolve over time and be updated periodically.

Conference arrangements are organized by the APS Meetings Department, with guidance from the Committee on Scientific Meetings, explained APS Meetings Director Hunter Clemens. It is a complex process that depends on the venue capacity in a given location and the environmental sustainability of the venue. Contracts have to be finalized six or seven years in advance and cancelling a meeting can potentially involve several million dollars in penalties, depending on circumstances. And in the midst of the pandemic, even virtual meetings are very expensive.

"When we presented the committee with the Phillips and Weissman proposal, they said 'we need to do something about this right away,'" said Clemens. "We've reached out to the cities where we plan to meet in the future and asked them to respond to these concerns, and we've gotten some responses back. Each city is in a different place with regard to the criteria, but the one that impressed me the most was Denver in terms of how far along they are with each of the issues."

APS CEO Kate Kirby notes that the added criteria build upon a statement adopted by the APS Council in November 2000, in which "The Council of the American Physical Society affirms the commitment of the Society to the protection of the rights of all people, including freedom from discrimination based on race, gender, ethnic origin, religion or sexual orientation. This principle will guide the Society in the conduct of its affairs, including the selection of sites of meetings of the APS."

"The challenge is going to be how many cities have this information available," said Kirby. "And if they haven't collected these statistics, they should start now. It's a way of having these locations realize that there are economic and business implications in terms of how they respond."

Kirby also has begun communicating with other scientific societies to gather wider support. "I brought this up with a working group of science society CEOs that meets informally," she says. "The reaction was very positive, and people acknowledged that it is really important to start asking these questions so that cities and convention bureaus know that these are criteria we will be looking at."

Andrea Liu (University of Pennsylvania), Speaker of the APS Council, says that APS President-Elect S. James Gates has drawn a useful analogy between the new criteria and the Sullivan Principles, developed by Rev. Leon Sullivan, during the last years of apartheid in South Africa. "Some corporations adopted these principles to protect their employees there by using their economic leverage to put pressure on the country. That's the idea—APS brings a lot of money with these conferences and we should not invest in cities that have a problem with police violence that endangers our members."

Gardner acknowledges that some APS members may disagree with the Society taking these steps.

"There are some who might be dismayed that we take this up—that this somehow makes us political," she says. "I resist that. I think that we are a physics organization, but we function in a society. It is part of our charge and is our goal to keep our members and conference meeting attendees safe."

APS Webinar: "From Passion to Action: Levers and Tools for Making Physics Inclusive and Equitable," aps.org/programs/minorities/webinars/passiontoaction.cfm.