The Scientist as Artist

The 2020 Nobel Prize in physics was jointly awarded to Roger Penrose, “for the discovery that black hole formation is a robust prediction of the general theory of relativity” and to Reinhard Genzel and Andrea Ghez “for the discovery of a supermassive compact object at the center of our galaxy”[1]. We join the members of the American Physical Society in congratulating our colleagues for their epochal work and lasting contribution to humanity’s understanding of the cosmos.

This achievement brings to mind a famous Albert Einstein quote: “After a certain high level of technical skill is achieved, science and art tend to coalesce in esthetics, plasticity, and form. The greatest scientists are always artists as well”[2].

Nobel Prizes are not always of this sort. Sometimes they celebrate an unexpected but ground-breaking discovery, such as high-TC superconductivity; or the culmination of a huge team effort for a long-sought confirmation, such as the Higgs boson; or, a transformational technological advance, like blue LEDs. But this year the Swedish Royal Academy recognizes such a “coalescence of science and art:” a genius composer’s masterpiece in the hands of virtuoso technical performers. Roger Penrose is the composer, while Ghez and Genzel are the virtuoso performers.

“The scientific theorist is not to be envied,” Einstein also cautioned. “For Nature, or more precisely experiment, is an exorable and not very friendly judge of his work. It never says ‘yes’ to a theory. In the most favorable cases it says ‘Maybe,’ and in the great majority of cases simply ‘No.’ If an experiment agrees with a theory it means for the latter ‘Maybe,’ and if it does not agree it means ‘No.’ Probably every theory will some day experience its ‘No’—most theories, soon after conception"[3]. Thus, theorists celebrate heartily that in this case Nature has not delivered a baleful glance to their lot.

Penrose used his mastery of topology (the part of mathematics that tells us that a donut and a coffee cup can be regarded as the same shape) to show that black holes can exist in the center of galaxies. Here the artist analogy is direct and obvious, since Penrose may be even more well-known for his artistic compositions of the Penrose stairs optical illusion[4], and his space-filling aperiodic 5-fold symmetric Penrose tiling[5]. The Penrose stairs are acknowledged as the direct inspiration to the Dutch artist M.C. Escher for his famous lithograph, “Ascending and Descending” in 1960[6], while the Penrose tiling paved the way for the 2011 Chemistry Nobel Prize awarded to Dan Shechtman for quasicrystals. Science and art converge in the mind and work of Roger Penrose. 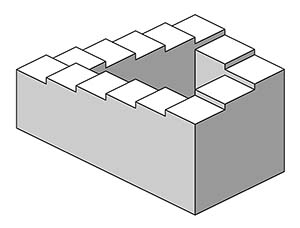 Drawing of the "impossible stairs" of Roger Penrose 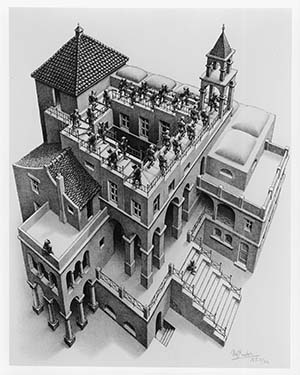 Ghez and Genzel are both master performers on some of the most sophisticated and beautiful instruments in optical physics: The Keck telescope in Hawaii, which was used by Ghez; and the ESO Very Large Telescope (VLT) in Chile, used by Genzel. These telescopes are spectacular to look at, but like fine race cars their real beauty is under the hood. Ghez and Genzel both used a succession of ever-improving technologies over decades to image the orbits of stars around what they thought might be our galaxy’s central black hole. A real breakthrough was the development of phase-corrective adaptive optics, which use a nearby star or a small patch of sodium atoms in the upper atmosphere excited by a ground-based laser to measure the changing distortion of the intervening atmosphere, so that a deformable mirror can correct the image.

Thus equipped, these telescopes have unequalled vision. And like a Stradivarius, their potential for discovery and amazement is then limited only by the virtuosity of their users. Ghez and Genzel put these machines to great use, to peer through our turbulent atmosphere and the obscuring dust of the galaxy to track the orbits of stars near the galactic center.

This union of art and science also illustrates a concept proposed by philosopher Karl Popper, that progress in science requires a convergence of unbounded leaps of the imagination, coupled to rigorous observational examination.

The observations in this case have been carried out over decades by the competing groups of Ghez and Genzel, who have pushed each other to ever increasing precision. The antecedents of this work show how science favors creative leaps of imagination.

The stars that these astronomers studied orbit a bright radio source in the center of the galaxy known as Sagittarius A*, which was one of the first objects detected by Karl Jansky in the early 1930s, using a radio antenna at Bell Labs in Holmdel, NJ. Bell Labs’ parent company, AT&T, was interested in the radio noise because its core business was telecommunication. Jansky’s leap of imagination was to realize that the noise in his antennas was from localized regions among the stars, and thus he founded radio astronomy. (Arno Penzias and Bob Wilson, working at a nearby Bell Labs location in the 1960s, would earn a Nobel Prize by noting that the sky also radiates a nearly uniform source of 2.7K thermal background noise, a remnant of the Big Bang). 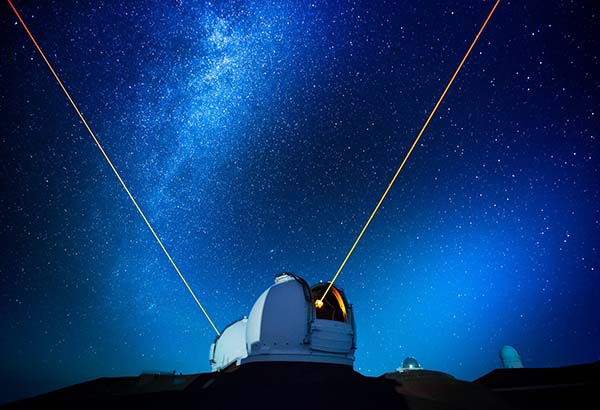 The W. M. Keck Observatory uses a laser (yellow) to create an artificial guide star that allows images to be corrected for atmospheric blurring. Nobel Laureate Andrea Ghez and her team used the facility in her prize-winning research. 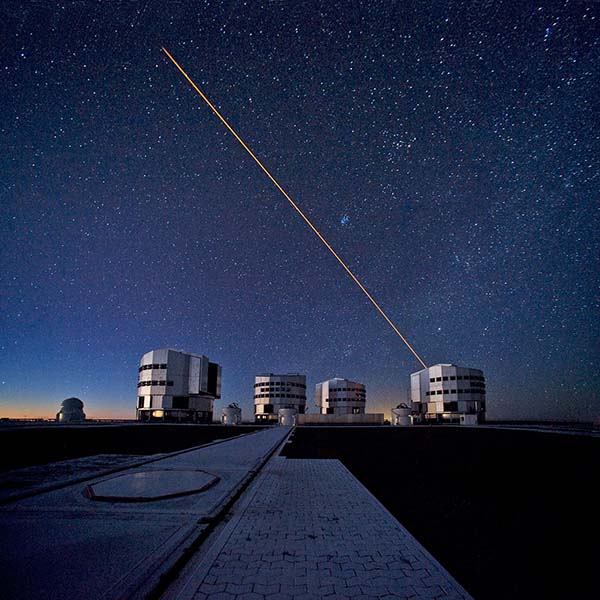 Nobel Laureate Reinhard Genzel and colleagues carried out their work at the ESO Very Large Telescope in Chile.

In the late 1970s Charles Townes, also a Nobelist for his invention of the laser, had a research group at Berkeley that was pioneering laser-based heterodyne infrared astrophysical Doppler shift measurements of atomic lines in the vicinity of the galactic center. Their Doppler measurements of atomic spectra showed high velocities that suggested that the Milky Way’s center might contain four million solar-masses in a volume too small to resolve, possibly a black hole[7], a leap of imagination that steadily gained credence through painstaking observations over the ensuing decades. If so, then the close orbiting stars could be a laboratory for precision General Relativity -- that is, if telescopes of sufficient resolving power could be developed. Reinhard Genzel was a postdoc in Townes’ group and later a member of the Berkeley faculty who pursued that great goal.

The adaptive optics technology that solved this problem was proposed only a few years later[8]. The concept of a laser guide star to tame the optical atmospheric distortions first appeared in classified reports for the 1980s US “Star Wars” program, inspired (and funded) for US national security. Soon after, the same concept was proposed independently within the astronomy community. The new generation of telescopes that would employ adaptive optics thus set the stage for the long and careful observations of Ghez and Genzel.

The progression in science from imaginative leap, to technical mastery, to detailed measurements, and ultimately to new discovery and future insights, is thus composed of collaborative efforts and creative singular advances by human networks of scientists that extend through time and across boundaries. Each step relies on contributions of many who cannot share the ultimate spotlight in Stockholm. Yet without them scientific achievements would be greatly impeded.

Thus decades of scientific accomplishments and insights and technological advance are celebrated in this year’s Nobel prize along with the artistry of the three honored scientists. This path of progress should be familiar to many physicists reading this Back Page. For isn’t that our quest as well? And we know why we persist: We love the intellectual and physical challenge, even when the larger goals we pursue are so difficult that few of us may ever succeed at such a level. But here we see that some do succeed, and it lifts us all. Well done!

P. H. Bucksbaum is 2020 APS President. He holds the Marguerite Blake Wilbur Chair in Natural Science at Stanford University, with appointments in Physics, Applied Physics, and in Photon Science at SLAC.

S. J. Gates Jr. is APS President-Elect and will take office as APS President in 2021. He is currently the Ford Foundation Physics Professor, Affiliate Mathematics Professor at Brown University, and Watson Institute for International and Public Affairs Faculty Fellow.