APS is committed to serving the world’s physicists through its meetings, publications, and many programs and initiatives. More than 23% of APS members live outside the United States in more than 100 countries, and physicists often cross continents to attend APS meetings.

For example, about 30% of 2019 APS March Meeting attendees traveled from outside the United States. Additionally, with some APS meetings going virtual due to COVID-19, international physicists have unprecedented access to APS meetings. In fact, the 2020 APS Virtual April Meeting attracted more than 1,800 physicists from outside the United States, accounting for more than 25% of attendees—up from an average of 6% during previous April Meetings. 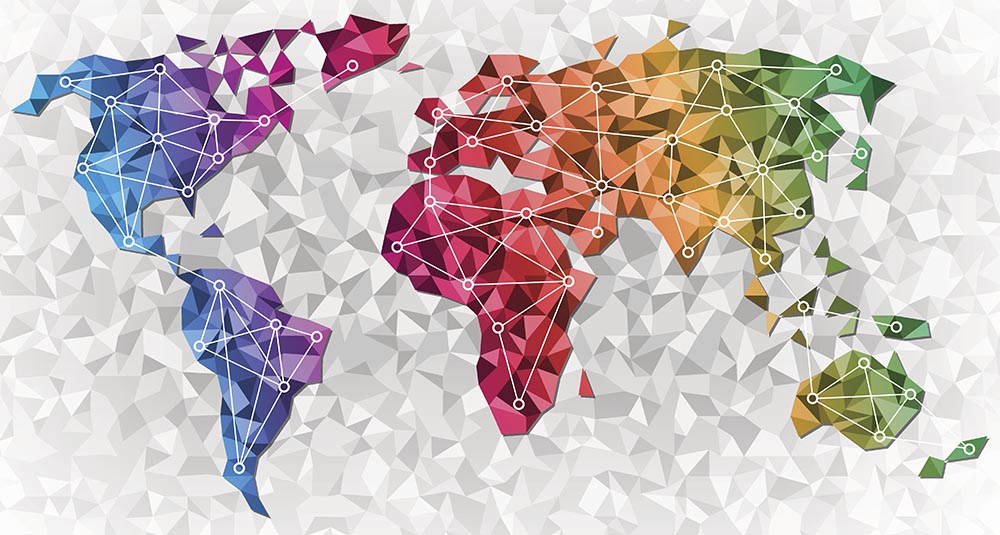 Along with international participation in APS meetings, more than 70% of articles published in APS journals are co-authored by scientists outside of the United States. Still, some physicists have asked: Why would a non-US physicist join the American Physical Society? In a 2017 survey, APS members, regardless of their nationality, stated they value being “part of a larger physics community” as the primary reason for joining APS[1]. This data point underscores APS’s role as a “global hub” where physicists throughout the world connect with one another.

Toward that end, in 2017, APS CEO Kate Kirby launched the APS Task Force on Expanding International Engagement to examine how the Society could better serve its international members and physicists worldwide. The task force reached out to all parts of the Society—APS leaders, units, members, editors, staff, as well as other national physics societies and international institutes. The task force issued a report and recommendations that were adopted by the APS Council of Representatives in November 2018.

As Director of International Affairs (INTAF) for APS, Amy Flatten is dedicated to working with APS colleagues to implement the task force’s primary recommendation: “that APS deepen its international engagement across the full range of the Society’s activities.”

To achieve the task force recommendation, INTAF initiated cross-organizational partnerships with various APS departments, programs, and initiatives to expand APS offerings beyond US stakeholders. The programs and activities described below provide a snapshot of the Society’s efforts so far.

During the past year, the APS Presidential Line has convened international leaders to discuss shared interests and concerns of the international physics community. These include:

Dan Pisano, Director of APS Industrial Engagement, and INTAF have partnered to broaden the APS Industry Mentoring Program (IMPact) to include international students, as well as mentors.

Flatten is thrilled by the evolution of IMPact: “This platform recognizes that we’re all interconnected. We hope that students from all parts of the world will be able to connect with a mentor in any country they wish to work. Likewise, those mentors who may also be seeking to hire can tap into a global pool of young physics talent.”

Pisano explained that many early-career physicists and international students have limited exposure to industry during their academic years. “The IMPact mentoring site will give them an opportunity to connect with an experienced industrial physicist to secure answers to their questions. Further, international mentors will be able to connect with both undergraduate and graduate students globally to help fill their company's need for physics talent,” he said.

Warren Lin, APS Head of Editorial Development, along with colleagues in the APS Editorial Offices in Ridge, NY, partnered with the Chinese Physical Society (CPS) to host an APS-CPS Author-Referee Tutorial Webinar. The webinar covered different writing methods for peer-reviewed scientific papers and tips for improving writing skills. It also provided information about the submission and review process for APS's Physical Review Journals. More than 100,000 physicists participated in the session, said Flatten.

Added Serena Dalena, Associate Editor, Physical Review Letters, “The Physical Review journals are highly international, and for an editor it is extremely important to engage with the broader physics community. The great thing about being a scientist is the feeling of being a citizen of the world; your colleagues come from different countries, and everyone brings their own background, so these events are also a great opportunity to build communities and exchange ideas.”

INTAF hopes to emulate that success by working with the Editorial Offices, the Indo-US Science and Technology Forum (IUSSTF) and the APS Committee on International Scientific Affairs to hold a similar webinar for young physicists in India. By partnering with IUSSTF, the audience for such a webinar could extend well beyond APS members living in India, reaching young physicists at institutions across that country. “India is recognized as an emerging scientific power, and by working with INTAF and its partners, we hope to strengthen our collaborations with many other physics societies,” said Dalena.

One of the questions most frequently asked by international physicists is: What does APS do for physicists in my country?

INTAF answered that question through the development of the APS International Engagement Around the World tool (aps.org/programs/international/map/), a clickable map which enables any physicist—anywhere in the world—to learn how to participate in APS programs and how the Society serves their interests.

The challenge now is making sure that physicists know the tool exists, and INTAF will work to reach audiences outside the United States and even beyond the membership of APS, so that they are aware of APS’s offerings.

INTAF wants to ensure that international students have an opportunity to participate in the Student Ambassadors Program, a leadership opportunity for students dedicated to representing APS at their home institutions.

Cortney Bougher, APS Director of Membership remarked about the program, “While one of the main goals of Student Ambassadors is the promotion of APS and APS membership; we also seek feedback and input from the students. Two-way communication is key, and APS values international students' perspectives.”

The APS Careers Program and INTAF are collaborating to include information about US visas, the Optional Practical Training Program (temporary employment related to an F-1 visa student’s program of study), as well as contacts for international companies in the Career Program’s online resources. APS appreciates the opportunity to provide young physicists with the resources necessary to be competitive and successful in their careers, whether they live in the US or another country.

"Physics is an international endeavor, and it is imperative that APS provide career resources that are relevant to our community worldwide,” said Crystal Bailey, Head of Career Programs.

STEP UP: piloting a new opportunity for International Ambassadors in 2020

APS STEP UP Ambassadors empower fellow teachers to inspire young women to pursue physics by changing cultural views about physicists through the use of evidence-based teaching resources designed to help young women see themselves as “physics people.” This year, APS is piloting a new opportunity to include international STEP UP Ambassadors, and Flatten is thrilled.

“Expanding STEP UP to include International Ambassadors is a wonderful way for APS to broaden the reach of a very important and impactful program and will help inform STEP UP about how to translate these important classroom materials to new languages and cultures,” said Anne Kornahrens, APS STEP UP Project Manager.

APS Conferences for Undergraduate Women in Physics (CUWiP) aim to help undergraduate women continue in physics by providing them with the opportunity to experience a professional conference. Flatten said INTAF is working with the program administrators to add new, international sites for the conferences in 2022.

“In 2021, this pilot program is looking to open up slots for international attendees with the hope that additional CUWiP conferences may be held outside the US in 2022. This will strengthen APS partnerships internationally and help undergraduate physics students build connections to other women and gender minorities in physics with whom they can share experiences, advice, and ideas,” said Renee Michelle Goertzen, Assistant Director of APS Programs.

INTAF and the APS Project Development Department are conferring with the APS Committee on International Scientific Affairs about eventually offering chapters outside the US. Chapters are a new type of membership structure to support graduate students, postdocs, and early-career scientists (see APS News, November 2020).

“It is exciting to have APS chapters launching across the United States this year. After the pilot program is further developed, we hope to eventually enable individuals outside the US to start chapters in their countries should they wish to do so,” said Farah Dawood, APS Chapters Program Manager.

Women in Physics: partnering with other national physical societies toward joint postings/offerings

APS is partnering with other national physical societies to highlight each Society’s resources for women in physics on their respective websites.

“By working together, we can reach more female physicists and better strengthen the role of women in physics than we could by working alone,” said Della Richardson, Women and Education Programs Coordinator.

Office of Government Affairs: working together to prevent certain US government policies from hindering international collaboration, mobility and opportunities for students to study and work in the US

The APS Office of Government Affairs (APS OGA) has spearheaded numerous advocacy campaigns and several surveys, in conjunction with support from INTAF, to push back against policies and proclamations that harm international students. Results from the most recent survey of students and department chairs are being examined as this article went to press.

“INTAF appreciates the chance to work with APS OGA to provide policymakers with powerful messages from constituents, as well as compelling data about the impact of US government policies affecting our nation’s ability to attract and retain global talent,” said Flatten.

Francis Slakey, Chief External Affairs Officer for APS, summarized the overall goals of the APS international efforts, saying that “The Society recognizes that it serves a diverse community of members and physicists worldwide—not just US physicists. This global community makes large contributions to APS and the US physics community through its involvement in APS meetings, units, programmatic activities, various initiatives, and by publishing in the Society’s journals.”

He added, “We look forward to continuing to serve the Society’s international members and the broader international physics community to address the interests and needs of all physicists globally.”