In an effort to provide encouragement to young physicists with potential for future discoveries in physics, each year APS presents the LeRoy Apker Award to two recipients for outstanding undergraduate research. In a typical year, eight finalists are invited to Washington, DC, to present their research to a panel of judges, but the 2020 selection meeting in August saw finalists making their case over Zoom.

Despite the curveball of having to go fully online during a pandemic, all of the 2020 finalists gave exciting talks on their research, with two emerging as winners. EliseAnne C. Koskelo (Pomona College) and Nicholas Poniatowski (University of Maryland, College Park) both impressed the Apker Selection Committee with their undergraduate research. APS News caught up with Koskelo and Poniatowski, now both in graduate school, to take a look back at their Apker experiences.

Koskelo graduated from Pomona College with a BA in Physics and Math in May 2020 and is now pursuing a master’s degree at the University of Cambridge as a Churchill Scholarship recipient. Her senior thesis research, exploring stochastic techniques to enhance the resolution of thermoreflectance imaging, formed the basis of her Apker-winning presentation. 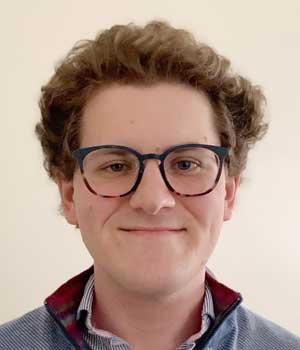 In May, instead of having a graduation ceremony, Koskelo was hard at work putting the finishing touches on her thesis and a journal paper manuscript, which made their way into both her Apker application and formed the basis of her August talk.

“Preparing for the Apker presentation was just trying to put [my] manuscript into a short talk and making it interesting to a wide variety of physicists,” says Koskelo, recounting her experience leading up to the Apker selection meeting. “Before the talk, I tried to think about what kinds of questions I’d be asked. It helped me think broadly about my research: Where does this apply to other fields? I wanted to explain the material to the interviewers in a way they could relate to.”

In a 30-minute talk, given to the Apker selection committee made up of 11 distinguished physicists from various backgrounds, Koskelo showcased her expertise and research on an interesting applied physics problem: turning noise in CCD imaging devices into a tool instead of a hindrance. Koskelo came upon the problem in her earlier research, necessitating clever techniques to overcome noise for signal detection, but the idea that noise could be useful in certain types of detectors intrigued her.

“I was fascinated by the fact that noise could be useful—I got hooked on the problem from that perspective—how can we use a random phenomenon to produce something controlled and useful?” says Koskelo.

Koskelo’s research culminated in an experimentally-validated model of stochastic resonance in thermoreflectance imaging systems, and she found that noise can improve thermal resolution in CCD imagers by an order of magnitude or greater, overcoming limits of digital resolution. Now, in graduate school, she’s hoping to combine her expertise with a love of quantum mechanics in research into frustrated magnetic systems.

Fascination with quantum mechanics was, in fact, a driving force behind Koskelo diving into a career in physics, a pivot from an earlier desire to pursue engineering.

“I started out as an 11-year-old interested in architecture, but then I became interested in engineering because of my love of math,” says Koskelo. “Then in college, I took a physics class, fell in love with quantum mechanics, and pursued it passionately after that.”

For other young physicists or would-be Apker winners, Koskelo offers a piece of advice: “Start research early and feel free to move between groups to find what interests you,” she says. “Find a way to connect your classes to the research you’re doing to get a holistic view of that area.”

Koskelo also stressed the importance of finding support and guidance from mentors, as she credits her own—Janice Hudgings in the Physics and Astronomy Department, and Ami Radunskaya of in Math Department at Pomona—with driving her success. After completing her master’s in physics at Cambridge, Koskelo will pursue a PhD at Harvard with the support of an NSF fellowship.

Poniatowski, also pursuing a PhD in physics at Harvard as a National Defense Science and Engineering Graduate Fellow, impressed the Apker committee with his research conducted during his undergraduate studies at the University of Maryland. His work focused on exploring a fundamental physics problem in the non-superconducting state of copper-oxide-based superconductors.

Poniatowski describes his Apker experience as “tremendously fun,” despite meetings taking place over Zoom this year, and cited the interaction with panelists as one of his favorite aspects.

“I found it exciting that the audience had such a wide range of interests across the spectrum of physics,” says Poniatowski. “Trying to translate this esoteric problem I’m interested in to a broad audience, and doing that in a somewhat successful way, was really fun to prepare, and it was really gratifying to actually give the talk and interact with some really inspiring physicists.”

Poniatowski’s Apker-winning research comes from work he did in collaboration with Richard Greene at UMD, studying copper-oxide-based, high temperature superconductors. However, Poniatowski’s research involved the non-superconducting state of these materials, hoping to further understand their behavior.

“The behavior of these materials is an interesting fundamental physics problem because it defies expectations of what a metal is and how it should behave,” says Poniatowski. “It’s also a practical problem in that it’s a natural stepping stone to understanding high temperature superconductivity and could open the door to making even higher temperature superconductors.” Now at Harvard, Poniatowski is continuing research in condensed matter physics with a focus on developing new ways to probe exotic materials.

Poniatowski describes his attraction to going into a scientific field “inevitable,” crediting his mother, who worked for NASA, as an inspiration.

“Growing up, I spent a lot of time going to launches and interacting with people in the space community, so like any child in that situation, I wanted to be an astronaut,” says Poniatowski. “By the time I was nine or ten, I was self-aware enough to realize this probably wasn’t feasible, and inexplicably concluded that the next best career was to become a physicist.”

Like Koskelo, Poniatowski credits much of his success in achieving his goals in physics to mentors and advisors throughout his undergraduate career. He names Greene, as well as Sankar Das Sarma, Johnpierre Paglione, and Tom Cohen, as influences on his approach to physics. For future Apker applicants, Poniatowski again joins Koskelo in advising others to dive into research as soon as possible.

“It’s never too early to start,” he says. “I was very apprehensive about approaching professors for research opportunities during my freshman year. Having no prior laboratory experience, I felt I had very little to offer. In reality though, you end up learning everything that you need to know in real time, so there is no excuse not to get started and dive in.”