In 2020, Roger Penrose shared the Nobel Prize in Physics for “the discovery that black hole formation is a robust prediction of the general theory of relativity.” That work is directly linked to the study of quasars—the brightest known objects in the universe—in the 1960s. It was a flash of inspiration by an astronomer named Maarten Schmidt that yielded an explanation for the incredibly powerful sources of radiation astronomers had been seeing in the galaxy: matter falling into massive black holes.

Schmidt was born in 1929 in Groningen, The Netherlands. His father was a government official who wound up being in charge of the national accountants at the Hague. When the Nazis occupied Holland during World War II, his father’s profession helped spare the family the worst of treatment suffered by many of their compatriots, although both Schmidt’s father and brother were among those forced to dig ditches for the German occupation. A failed Allied advance in late summer 1944 resulted in the Nazis dismantling the country’s railroads, sending the iron to Germany. With the transport system destroyed, famine set in, claiming tens of thousands of lives.

Nonetheless, young Maarten fell in love with astronomy during that time. The enforced blackouts made it possible to see the night sky even in a big city, and Schmidt’s father would often take him on nighttime walks so long as there were no air raid alarms. In 1942, Schmidt was even able to visit his uncle, Dik Schmidt, in the city of Bussum, who was an amateur astronomer. 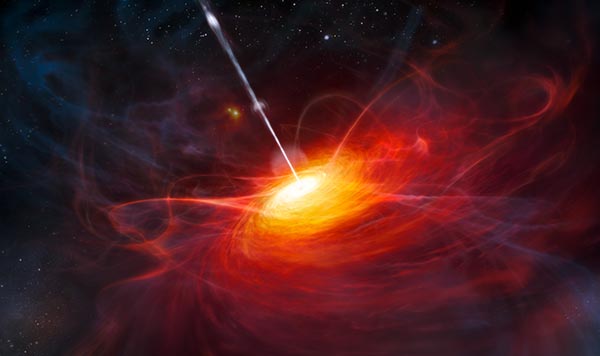 Artist’s rendering of the accretion disk in ULAS J1120+0641, a very distant quasar powered by a supermassive black hole with a mass two billion times that of the Sun.

“He showed me the sky through his telescope on an upper floor of his pharmacy,” Schmidt later recalled. “I found a lens at my paternal grandfather’s workshop and soon put my first little telescope together.” Eventually, despite all the shortages of food and materials, he was able to polish mirrors for use in an improved telescope. Schmidt was also able to visit the local observatory, where he met an astronomer named Adriaan Blaauw, who later became a cherished colleague.

Canadian troops finally liberated the city of Groningen in April 1945. Schmidt recalled being caught between Canadian and German troops on the second day of battle, “in the firing line of the Germans. We spent much of the night on the kitchen floor in the back of the house—looking through the window we could see the sky, blood red as the center of Groningen was on fire.” With the war finally over Schmidt was able to finish high school, and enrolled at Groningen University in 1946 to study physics, math, and astronomy.

After graduating, Schmidt served as an assistant to Jan Oort at Leiden University, but his tenure there was briefly interrupted when he was called into military service. Fortunately, the conflict in the Dutch East Indies that had precipitated that call ended quickly, and he was released from his obligation after a couple of months following basic training. He returned to Leiden and began studying the brightness behavior of comets, at Oort’s urging, ultimately contributing to the discovery of what is now known as the Oort cloud of comets around our solar system. Schmidt also spent a year on an observational expedition to Kenya.

He completed his PhD in 1956, and he was offered a Carnegie Fellowship at Mount Wilson Observatory in Pasadena, California. He would eventually emigrate to America in 1959 to become a professor at the California Institute of Technology, and he was soon making observations with the Palomar 200-inch telescope, studying star formation, and how the abundance of heavy elements increased with cosmic time. His interest gradually shifted to radio sources in the night sky.

It was the advent of radio astronomy that led to the detection of the first quasars, objects that emitted large amounts of radiation across many frequencies but without any obvious optical source. Schmidt was intrigued by the quasi-stellar radio source 3C273, because it had an unusual spectrum: specifically, its emission lines didn’t match any known chemical elements.

Eventually he realized that, in fact, hydrogen could account for the spectrum—provided there was a very high red shift. That could only mean that the object was roughly three billion light years away. And to be so far away, and yet still so visible to astronomers, it had to be shining with the light of around 2 trillion stars. Schmidt published that revelation in Nature, on March 16, 1963. Astrophysicist Hong-Yee Chiu coined the term “quasar” in a May 1964 article in Physics Today.

While not widely accepted right away, his insight had an immediate and significant impact. Black holes were first predicted as an unusual solution to the equations of Einstein’s general theory of relativity by Karl Schwarzschild in 1918. Physicists initially assumed such exotic objects were purely theoretical. It was the discovery of quasars that gave physicists a means of verifying the existence of black holes, since the only reasonable explanation for the powerful radiation was matter falling into a massive black hole. That, in turn, convinced Penrose to seriously tackle the problem of demonstrating how black holes might realistically form in our universe. And over time, many lines of evidence have emerged supporting his conclusions.

Quasars continue to provide exciting insights into black holes and stellar formation, among other areas of research. At the 2021 virtual meeting of the American Astronomical Society, a team led by University of Arizona astronomers announced the discovery of the most distant quasar to date. Designated J0313-1806, the quasar is 13.03 billion light years from Earth and dates back to just 670 million years after the Big Bang. It is host to a supermassive black hole of about 1.6 billion solar masses. The quasar is also the first such object to show evidence of super-heated gas escaping from that black hole, at one-fifth the speed of light.