The Conferences for Undergraduate Women in Physics have been operating since 2006, with APS as their institutional home since 2012, to empower undergraduate women to continue their studies in physics. Typically, CUWiP conferences take place at 13 different sites across the United States and Canada on the same weekend, with students traveling to the CUWiP site closest to their home institution. This year, due to the ongoing COVID-19 pandemic, CUWiP was held online for the first time, allowing all attendees to interact through various virtual avenues. The online format also added another first: CUWiP became a truly international conference, with attendees signing on from 17 countries.

From January 22 to 24, 1100 students and 100 additional volunteer speakers and moderators gathered online for an uplifting weekend, packed with plenary sessions from inspiring physicists, workshops covering topics from applying to graduate school to managing mental health, and plenty of networking opportunities. This year’s Millie Dresselhaus CUWiP Keynote Lectureship featured Mary James, Dean for Institutional Diversity at Reed College, who spoke on what it means to have access to physics education.

Despite the online format, attendees were able to build connections with other women in physics with whom they can share experiences, advice, and ideas, a primary goal of CUWiP. Through the Zoom chat function, attendees discussed and reacted to talks in real time, commiserating about shared experiences—experiences they were used to coping with alone, often in a class where they don’t see people like themselves. “Speed Geeking'' sessions sprinkled throughout the conference also gave attendees a chance to broaden their networks, with 10-minute sessions in randomly assigned Zoom rooms with 10 other people. Speaker breakout rooms provided a space after each session to keep discussions and questions going. Some of the attendees even started their own Discord messaging channel for the conference, hoping to preserve and continue the connections they were making with other women in the physics community. 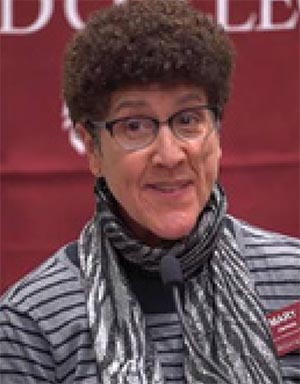 The conference kicked off on Friday evening, with the first of four plenary sessions: a panel featuring Kelly Nash (University of Texas at San Antonio), Érica Silva (Federal University of Mato Grosso), and Jessica Esquivel (Fermilab). In a discussion moderated by Barbara Szczerbinska, Chair of the CUWiP National Organizing Committee, the panelists shared their personal journeys into physics and answered audience questions. A recurring theme of the panel was overcoming obstacles faced by people in marginalized groups in physics, from imposter syndrome to harassment. The panelists shared their own strategies of successfully navigating careers in physics, emphasizing the importance of building a strong support system, caring for mental health, and remembering that failure is a part of physics—not a sign someone doesn’t belong.

After the panel discussion, CUWiP attendees had their first chance to chat face-to-face in their first Speed Geeking session, before heading to a virtual networking fair. The networking fair utilized an online meeting program called Gather Town that allows users to pilot a tiny avatar through a virtual space. Attendees were able to make connections with representatives of different labs, schools, and companies by simply walking up to a booth with their avatar and starting a video call—almost like a real-life interaction.

On Saturday morning, attendees had their choice of workshops and talks to attend during three different time slots. The parallel sessions ranged in topics, from applying to and navigating grad school, to a leadership workshop, to discussions of various physics careers. Breakout sessions after each session allowed speakers and attendees to interact further.

A highlight of the conference for many students was the Millie Dresselhaus CUWiP Keynote Lectureship, which took place Saturday afternoon. In her talk, James reflected on her own path into physics and the ways her professors at Hampshire College, MIT, and Stanford ensured she had access to everything she needed to succeed. Throughout her career, James has worked to help physics become more welcoming and supportive of those who may not have those tools to access the field: James has served as chair for the APS Committee on Minorities and recently was the co-chair of the American Institute of Physics Task Force to Elevate African American Representation in Undergraduate Physics and Astronomy (TEAM-UP).

James described a number of barriers that are in the way for many students walking into physics classrooms, especially those coming from underrepresented demographics: imposter syndrome, stereotype threat, belongingness uncertainty, and fixed-mindset thinking. To help overcome these obstacles, James reminded attendees to tap into their savvy, tenacity, and resilience, to take advantage of resources they are entitled to, and to not let anyone steal their joy.

Following a speaker chat and a short break, the third plenary of the conference featured Anita Sengupta (University of Southern California), who discussed the exciting engineering involved in exploring Mars. While she is currently Chief Product Officer at an engineering start up as well as an associate professor at USC, Sengupta spent 16 years with NASA’s Jet Propulsion Laboratory (JPL), most recently working on Mars rover landing technology. Through her talk, Sengupta stressed the importance of trying new and different things in her career as she turned her love of sci-fi into real science. When she was tapped at JPL to work on landing technologies for Mars rovers, Sengupta says she wasn’t then an expert, but jumped at the opportunity to “follow [her] curiosity.”

More parallel sessions followed, going into Saturday evening, and resuming on Sunday morning. Attendees were able to learn about important topics, such as dealing with imposter syndrome and sexual harassment in physics, as well as practical skills like negotiation and communication. Student lightning talks on Sunday featured 10-minute presentations showcasing undergraduate research.

On Sunday afternoon, the fourth plenary and official closing session of the conference featured Sharona Gordon, professor of Physiology and Biophysics at the University of Washington and founder of Below the Waterline, an organization working to combat sexual harassment in academic science, engineering, and medicine by changing the climate in these fields. Gordon described a profound sense of not feeling safe growing up, due to a family culture that seemed to penalize her for being female: a search for safety pushed her quickly through school. Her strategy was to amass so many credentials that no one would discriminate against her—a strategy that ultimately failed, as she continued to face harassment and discrimination, even as an associate dean. She came to the conclusion that “only in a world that we’re all safe can anyone feel safe,” and became devoted to helping others—especially women and others from underrepresented groups—succeed in physics.

She spoke on Below the Waterline, which was launched in response to a National Academy of Sciences report that identified three types of sexual harassment that was depicted as an iceberg: the first two types, sexual coercion and unwanted sexual attention, exist above the waterline. The third type, gender harassment, floats below the waterline, making it less apparent even though this type of harassment is the most pervasive—and contributes substantially to an unwelcoming community. According to Gordon, melting the iceberg starts with changing the temperature of the water through everyday behaviors to improve the environment of science. While navigating physics, Gordon reminded attendees to have self-compassion, and trust they already have everything they need to be successful.

Student feedback, shared by attendees during and after the conference, indicated that many attendees found that the plenary talks and discussions with other students made them feel less alone in the world of physics. Some students also specifically enjoyed the online conference, having never had a change to attend an in-person CUWiP in the past.

The 2021 CUWiP Conference was made possible with sponsorship from the National Science Foundation, the Department of Energy, and the Heising-Simons Foundation, with additional support from the Alfred P. Sloan Foundation, General Atomics, and Google Quantum AI. Recordings of CUWiP sessions are available at the Women and Gender Minorities community on APS Engage (engage.aps.org).