A core tenet of the mission, vision, and values of APS is creating a physics community that fosters diversity, equity, and inclusion (DEI). In line with those goals, the 2021 APS Annual Leadership Meeting featured a powerful session titled Effecting Change: Individual Actions and Leadership. The two-hour session focused on motivations, experiences, and actions that can be taken to improve diversity, equity, and inclusion in the physics community.

Lollie opened the section on DEI motivations with a statement: “I am Michelle Lollie, a Black woman who studies physics—and I am a human being.” All too often, she says, society wants to place people in boxes—like being a Black woman or a physicist—rather taking the responsibility of humanizing others. A dedication to DEI centers on taking responsibility for how we treat others and recognizing their inherent value as human beings. Lollie emphasized the importance of humanizing individuals, especially when hearing statistics that attempt to describe the experiences of marginalized groups in physics. 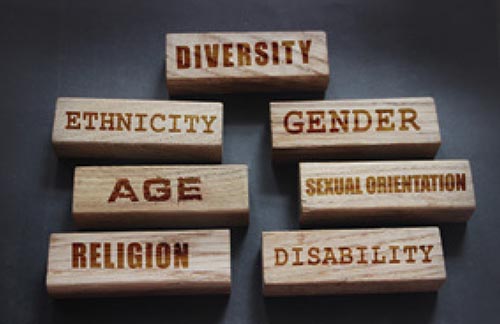 According to Shuve, that innate humanity is a part of the draw of physics: it’s something real and universal— “we’re all made of atoms.” To maximize objectivity while studying such a universal field, he says, the physics community should reflect the demographics of our society. But it doesn’t—thanks to biased structures, metrics, and expectations that have compounding, destructive effects on marginalized groups. By focusing on such metrics, physics misses out on empathy, community organization, and new ways of thinking through a continued exclusion of people of color, LGBTQ+ people, and others. “If we truly believe we’re doing physics because it makes the world better, we have to make it more human and less discriminatory,” said Shuve.

Modeste Knowles presented data on the persistent exclusion and underrepresentation in physics of women, people of color, people with disabilities, LGBTQ+ people, and others. For example, even as the number of physics degrees awarded in the US has grown 75 percent since 2004, there has been no change in the number awarded to Black physicists. Failure to foster diversity comes at a cost: a less robust STEM workforce for the future, the reduced ability to solve complex problems for the field of physics, and an even bigger cost for those who are marginalized, who are forced to endure environments hostile to their identity groups on a daily basis. “Engaging in DEI work is just the right thing to do, if you believe we’re all capable of succeeding in physics and you believe that everyone has the right to pursue physics, without being encumbered by sexism, ableism, and other forms of oppression,” said Modeste Knowles.

As the focus of the session shifted into how to take action, Nord called out institutions that talk about diversity, but instead of taking action, prioritize institutional power and the comfort of predominantly white, male physicists over justice and change. He described a need for individuals—especially those with power—to reflect on what actual changes are happening at institutions and to make space for those with real knowledge of how to make such changes happen. Nord also spoke of the need for change now, instead of asking physicists from marginalized groups to wait around for incremental improvements or compromise—a practice he says is common, and incredibly damaging. “We are in a state of urgency… watching how white supremacy has a stranglehold on the world—and physics is not separate,” said Nord. “For the majority of its existence, physics has not embraced this urgency—if it did we would not be where we are.”

Next, Esquivel discussed the task of individual activism, which she undertakes at the expense of her time, her career, and at times her health. “The aim is to change the physics spaces we work in so that we aren’t uncomfortable, but that requires uncomfortable conversations and dismantling an oppressive system,” she says. Esquivel is deeply involved with work to create these spaces, through Black In Physics, a community built to highlight Black scholars and create a counter-space that focuses on the whole self, and ChangeNow, a collective of Black physicists at Fermilab, calling for the physics community to take action to value Black Lives. This is work Esquivel undertakes because she has to, not because she wants to, she says, and she called on others to join in the work: “it’s easy to laud the efforts [of] marginalized people, but it’s important to note that we didn’t choose physics to clean up the mess we didn’t create… use this as fuel to not be allies, but accomplices.”

Wechsler echoed previous themes of centering humanity in physics and the importance of bringing as many people to the table as possible. She emphasized the importance of listening to the experience of Black, Brown, and transgender colleagues—anyone who experiences the physics community in a different way, and who do not have the option to wait on incremental change. Wechsler discussed work she has participated in at Stanford to build a community dedicated to addressing diversity at her institution, stressing the need for many different voices being part of this community. She also described the experience of not feeling like she had the power to make change, and how to navigate it: “I had learned a lot about reaching outside of my own comfort zone to talk to senior white men about how they can do things I can’t…you have to do what works for you at the stage of the career you’re at.”

The final section of the session focused on how leadership can effect change at their institutions, with Cooper describing practical ways for administrators to identify and address the barriers to a more vibrant and diverse physics department. He recognized the importance of making structural changes and challenging the current systems in place for recruitment and admissions. As an example, he discussed the effect that de-emphasizing the GRE had on admission, doubling the number of women admitted to the physics PhD program at University of Illinois, Urbana-Champaign and increasing the number of Hispanic and Black applicants by 80 and 50 percent respectively. “What we’re trying now is taking a holistic view of students—trying to find the things we value, but that might otherwise be ignored in the traditional admissions process,” says Cooper.

Quan concluded the final section by sharing two projects that represent collective efforts to cultivate institutional change. She discussed the Departmental Action Team (DAT) project that brings faculty, students, and staff together to create change around educational issues by shifting departmental culture and helping DAT participants become change agents by developing new skills. Another project, The Access Network, supports student leadership in advancing equity in STEM at sites across the country. Both of these projects focus on students, and Quan emphasizes that these students should be recognized as full members of such organizations and be rewarded and compensated for their work. She also discussed the need to view work for institutional change as a continued process that should be evaluated and adjusted as necessary. “If you recognize that change is an ongoing process, you can look at change as an iterative process that can be evaluated; can introduce new ideas,” says Quan “This perspective is valuable, since our environment is always changing.”

A question and answer session followed, along with an invitation for participants to list their own ideas for improving DEI at their institutions in a provided chat-box. Mason ended the session which a challenge to the audience: “become an activist in whatever way works for you.”

Recordings of this and other sessions at the Annual Leadership Meeting are available at aps.org/meetings/leadership.