The APS Topical Group on Statistical and Nonlinear Physics

The APS Topical Group on Statistical and Nonlinear Physics (GSNP) is a home for physicists interested in advancing and disseminating knowledge about the interdisciplinary area of nonequilibrium statistical physics.

Founded in the 1940s, GSNP is one of the Society's oldest units. The group has its roots in the Fermi–Pasta–Ulam–Tsingou Problem, the apparent paradox that complicated physical systems tend to exhibit periodic behavior over time.

“Fermi and his collaborators were obsessed by this problem in the closing days of World War II given the advances in computational ability at that time. They realized that there was a body of these puzzling phenomena in systems that were supposed to become random and did not, and this deserved study,” explained GSNP chair-elect Thomas Witten (University of Chicago). “From that day to this, the preoccupation of our unit has been on phenomena with so much randomness and disorder that any description requires a statistical approach.”

The classic areas of interest within statistical and nonlinear physics include phase transitions, turbulence, and collective motion. More recently, interest has also grown around newer topics like dynamic networks and active matter—that is, complex particulate systems in which the constituent parts have their own rules of behavior (such as a flock of birds, a swarm of bacteria, or self-assembling biopolymers).

As these diverse topics suggest, GSNP is a highly interdisciplinary group that draws members from wide-ranging areas of physics. Within APS, GSNP cooperates most closely with the Divisions of Soft Matter (DSOFT; see APS News August/September 2019), Biological Physics (DBIO; see APS News December 2018), and Polymer Physics (DPOLY). GSNP also has a great deal of synergy with the Topical Group on the Physics of Climate (GPC; see APS News March 2020). 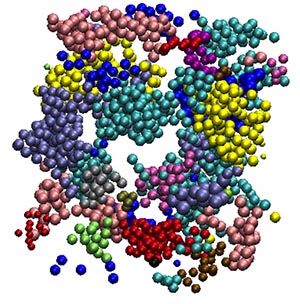 Image shows clusters and crystals of active particles forming in a colloidal suspension. Active matter is one of many topics explored by members of the APS Topical Group on Statistical and Nonlinear Physics.

With approximately 1,400 members, GSNP is on the cusp of becoming a full-fledged APS division. According to APS policy, a topical group is eligible to rise to division status once its membership exceeds 3% of total APS membership (i.e., approximately 1,600 members) for two consecutive years. With division status, GSNP (or what could soon be “DSNP”) will be entitled to additional leadership posts (namely, a dedicated Division Councilor to represent the division’s views at national APS council meetings and two graduate student representatives), a greater allocation of sessions at APS meetings, and, on a symbolic level, recognition of statistical and nonlinear physics as a major subfield of physics.

A point of pride for GSNP is its large presence at the APS March Meeting. “We make our major footprint at the March Meeting,” Witten explained. “Nearly everything happens there.”

GSNP’s lineup for the upcoming 2021 APS March Meeting includes five invited sessions and 12 focus sessions. Particular excitement surrounds an invited session on cell mechanobiology, which will bring together several illustrations of how motion from molecular behavior within cells can give rise to dynamics at the level of whole cells, tissues, and organs. Examples include the nonlinear dynamics of cardiomyocytes beating in sync with one another and the molecular action underlying the autonomous organization of the winding and unwinding of DNA to coordinate the expression of certain genes at a particular time.

Another hot topic within GSNP’s sessions is textiles, topology, and the physics of knitting—a fascinating example of emergent properties given that a one-dimensional strand of yarn can give rise to extremely intricate, three-dimensional objects, and that combinations of just two simple knit stitches can produce fabrics with vastly different elastic properties.

Another major March Meeting event for GSNP is the awarding of its flagship Leo P. Kadanoff Prize for theoretical, experimental, or computational achievements in statistical and nonlinear physics. This year’s award went to Sidney Redner (Santa Fe Institute), who will speak about the concept of “first-passage probability” and its applicability to phenomena as diverse as the firing of neurons to the execution of stock options. Given the unexpected cancellation of last year’s March Meeting in the early days of the COVID-19 pandemic, the 2020 awardee, Nigel Goldenfeld (University of Illinois, Urbana-Champaign) will also give a presentation summarizing his work exploring how patterns evolve over time—an area that touches everything from the flow of turbulent fluids to the dynamics of geological formations to the structure of ecosystems.

Looking forward, the GSNP executive committee’s principal goal for the group is to increase participation beyond the March Meeting. To this end, GSNP leadership recently initiated a remote seminar group—named the “k log W” group as a nod to Boltzmann’s entropy formula—to recognize leading work in statistical physics throughout the year.

Witten summarized the benefits of GSNP membership as a place to seek recognition for one’s work and access to expertise in the field. “We provide a forum of people who can best appreciate your ideas and discuss how these ideas can grow and be validated. That’s what science is about—that’s the value we bring to this branch of science,” he explained.

Witten emphasized that people need not specialize in statistics or nonlinear physics in order to gain from the GSNP community: “A lot of our members are mostly interested in a particular phenomenon rather than the fact that it’s a statistical problem,” noted Witten. “However, anyone who uses statistics stands to gain by becoming a member of GSNP so that they can consult with people, develop ideas, and discuss and where these ideas fit into the overall knowledge of statistical phenomena.”

Overall, GSNP stands out as an ambitious and collaborative group within APS, promoting research and exchange of ideas at the forefront of one of the most active and interdisciplinary areas of physics. More information can be found on the GSNP website.