Effective control of the spread of viruses like SARs-CoV-2, the virus responsible for the COVID-19 pandemic, relies on three Ts: testing, tracing, and treatment. Testing for coronavirus infection remains important, especially as many areas in the United States are starting to re-open schools and loosen restrictions designed to slow its spread. However, the main testing methods for COVID-19 are often hindered by cost and speed, with some tests trading accuracy to get faster results.

At the 2021 APS March Meeting, Miguel José Yacamán, a professor in the Applied Physics and Materials Science Department at Northern Arizona University (NAU), described a new method of virus detection using laser spectroscopy to deliver fast, cost effective results. Yacamán has been applying a type of Raman spectroscopy, a tool with uses ranging from solid-state physics to breast cancer diagnosis, to detect the SARs-CoV-2 virus in a saliva sample in minutes.

“The biggest strength of this method is its portable application: You don’t have to take saliva to a lab for testing,” said Yacamán. “We can have results from a test in about five minutes … which could be useful in airports, schools, communities, and sports stadiums.”

With funding from NSF’s Rapid Response Research program, Yacamán’s lab has been employing a technique called surface-enhanced Raman spectroscopy (SERS) to identify what are essentially viral fingerprints: Raman spectra unique to individual viruses, based on their molecular makeup. Using samples obtained from NAU’s Pathogen and Microbiome Institute, Yacamán’s team observed a signal completely unique to the SARs-CoV-2 virus. The presence of a COVID-19 infection could be established by matching a Raman spectrum from a sample against SARs-CoV-2’s established fingerprint. “We are now totally convinced that we can identify the virus,” said Yacamán. 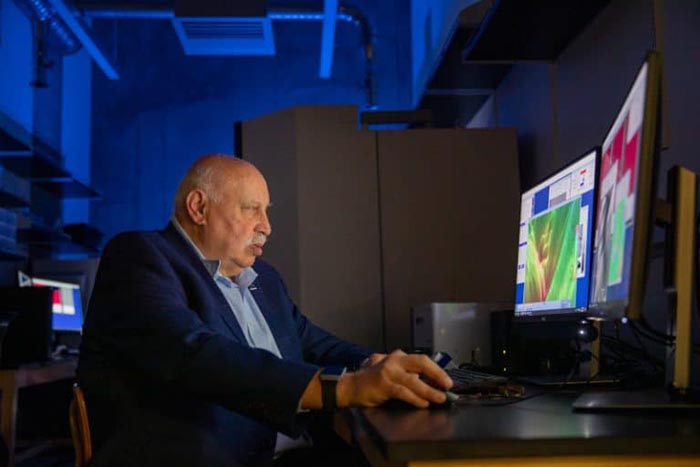 Researchers in the lab of Miguel José Yacamán at Northern Arizona University are studying a way to quickly detect the virus that causes COVID.

In addition to the novel coronavirus, Yacamán’s team has used the same technique to identify the fingerprints of other viruses, including other coronaviruses. The cov-NL63 virus, which causes a respiratory illness that shares some symptoms with COVID-19, produced a very different Raman spectrum. This ability to differentiate between diseases caused by different viruses, including between COVID-19 and the flu, has the potential to be an important diagnostic tool.

“It’s frustrating when I go to the doctor and they say you have a virus…which virus?” said Yacamán “In the future [we could] have more of these tests to rapidly distinguish between viruses and get a good diagnosis.”

Employing SERS as a method of testing for COVID-19 can help eliminate some of the balancing act between cost, speed, and accuracy that impacts traditional testing methods. The current gold-standard test for COVID-19 infection, the RT-PCR (reverse transcription polymerase chain reaction) test typically takes at least two days to produce results. Newer testing methods, like ELISAs (enzyme linked immunosorbent assays), can provide faster results, but sacrifice reliability, especially early in an infection. PT-PCR, ELISA, and other methods of testing for COVID-19 rely on expensive chemicals and non-portable lab equipment.

“[SERS] is a technique that only uses physics, no chemicals except nanoparticles, which are incredibly cheap to produce,” said Yacamán.

Raman spectroscopy works in part by measuring the inelastic scattering of photons, known as the Raman effect—named for physicist C.V. Raman who observed the phenomenon in 1928 and won a Nobel prize for his discovery in 1930. The signal given off by the Raman effect can be very weak, but in SERS, substrates containing nanoparticles that interact with the surface proteins of a virus, such as SARs-CoV-2’s spike proteins, act like antennas for a stronger signal.

While employment of SERS as a COVID-19 testing technique isn’t yet possible due to the need for clinical studies, Yacamán expects such studies would yield promising results: similar studies to test the efficacy of SERS to detect breast cancer showed sensitivity of 92 percent and specificity of 96 percent, and he believes tests of SERS for COVID-19 would produce similar numbers. The next step, says Yacamán, is partnering with an institution like a university hospital, to start testing this technology.

In a panel following his scientific talk at the March Meeting, Yacamán discussed how, as a physicist, he became involved with trying to solve the practical, medical problem of COVID-19 testing.

“I learned [during my postdoc] that when you work on problems related to real problems people have, in industry or medicine, then your scientific impact is much bigger. At the same time, those problems are much more difficult because they’re real problems—You can’t make simple assumptions,” Yacamán said. In a message to students, he adds “if you work in important, applied problems, the physics is more complex, but the results have more impact.”