APS has reached out to young physicists across the globe to better understand their interests and needs. The months-long effort began in February when APS International Affairs partnered with the APS Membership Department to host the first-ever International Young Leaders Forum (IYLF), as part of the 2021 APS Annual Leadership Meeting.

The IYLF gathered 48 young, service-oriented physics leaders from 22 countries spanning six continents. They participated in four focus groups, advising members of the APS Committee on International Scientific Affairs on ways APS could engage with students and early-career physicists in their country. 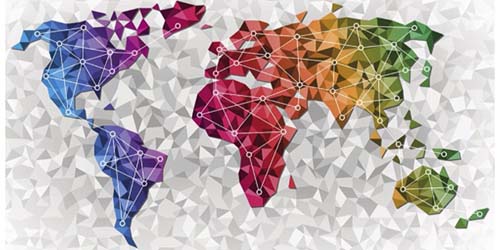 “For this series, we are really looking to go beyond the general career advice that so many resources on our website already cover and do a ‘deep dive’ into the needs of the international physicist community. These focus groups provided us with some great insights to help plan the series,” said Crystal Bailey, Head of Career Programs at APS.

Added Amy Flatten, Director of International Affairs for APS, “I am appreciative of responses we received from young physicists worldwide who were willing to participate in the focus groups that provided APS with important information about how to meet the needs of our members. While we couldn’t accommodate everyone who was willing to participate, we plan to have additional focus groups in the future.”

Discussions from the focus groups proved insightful, as participants weighed in on matters such as visas and immigration, professional development opportunities, non-academic career paths, international scientific collaboration, and science diplomacy.

Participants noted, for example, that the US government’s Optional Practical Training Program (OPT) could be a topic for discussion on APS’s Engage platform (engage.aps.org) to help students and job seekers gain a better understanding of the program. The OPT enables highly skilled international students who completed their studies in the United States to gain work experience for a period of time and is used as a recruiting tool by universities, national labs, and high-tech companies. Businesses such as Amazon, Microsoft, and Intel are among numerous tech firms that annually employ thousands of recently graduated international scientists and engineers under the OPT program.

The Society values the importance of OPT. Last fall, APS Government Affairs (GA) ran a successful grassroots campaign that protected OPT from being suspended by a Trump Administration Executive Order. APS GA also released a report titled “How International Students and Researchers Benefit the United States: Their Experiences, Their Stories,” highlighting the importance of OPT and J-1 visas programs.

In the area of professional development, focus group participants pointed out the importance of learning networking strategies, including how to approach people formally or informally and how to leverage contacts developed during conferences. Additionally, they said they were eager to get the most out of their mentoring relationships.

To that point, APS recently revamped the APS IMPact Mentoring Program website, which is the Society’s resource for connecting early-career physicists with industry mentors, to strengthen connections between students and industry. In a recent APS News article, Dan Pisano, Director of Industrial Engagement at APS, said the refreshed site “appears to be fostering some useful mentoring of students and early-career physicists with industry representatives.”

Early-career physicists are also interested in finding job opportunities for non-citizens, including possibly at national laboratories or through fellowships. And using physics to benefit society is also an area of interest. According to feedback from the focus groups, they are interested in advocacy training to help them use their voice to make an impact on issues that are important to the physics community. Additionally, they want to make an impact in the area of science diplomacy by working with scientists in other countries to strengthen collaboration among diverse nations.

Flatten said she is eager to continue to work with her APS colleagues to serve APS’s international members who comprise a significant portion of the Society’s membership. More than 23% of APS members live outside the United States in more than 100 countries, and physicists often cross continents to attend APS meetings. In addition, more than 70% of articles published in APS journals are co-authored by scientists outside of the United States.

Moreover, with APS meetings going virtual due to COVID-19, international physicists have had unprecedented access to APS meetings. In fact, the 2021 APS March Meeting attracted more than 4,481 physicists from outside the United States, accounting for more than 34% of attendees—up from an average of 30% of total attendees during previous March Meetings.

“In the spirit of ‘One-APS,’ I look forward to working across various departments to address the needs of our international members,” said Flatten.

Added Francis Slakey, APS Chief External Affairs Officer, “We take our mission as a membership organization seriously, and that means making sure that both our national and international physicists benefit from their membership in APS.”