From Physics to the Circus

Julia Ruth studied physics and Antarctic and Arctic sea ice. She has expertise in programming and science education. And today, she is flourishing, as she spins gracefully through her career as a circus performer.

Ruth’s signature performance apparatus is the "cyr" wheel, an aluminum or steel wheel large enough for her to stand inside and grasp the edges. With seven years of performance experience, she is able to balance, gyroscopically spin, move, and dance with the wheel to the amazement of her audiences, who marvel at her fluid movements. She laughs, because it’s her background that has allowed her to be successful in this unconventional career. “I gravitated towards the cyr wheel because it was a clear example of forces and motion and acceleration,” she says. “It represents physics.”

Her circuitous route towards a joyful career began when the family lived in Germany for a year while she was in ninth grade. She had to take a physics course, and even though her German was far from fluent, something clicked. “That’s how I knew I loved physics,” she says. “I wasn’t frustrated by the language barrier and still enjoyed it. I knew I wanted to do more of it.” She spent the rest of her education at a STEM magnet school in Maryland and matriculated to the University of Maryland (UMD) as a physics major in 2010, because “if I have to spend four years specializing in one subject [in] college, I'd better study something I like.”

Her university experience was prolific: she conducted research on dark matter, wrote code for LIGO, and interned at NASA Goddard Space Flight Center, where she contributed software to analyze Antarctic ice sheet radar data. She also pursued a project on Arctic sea ice change at the NOAA Center for Weather and Climate Prediction. Her analysis of laser altimetry data was part of the prelaunch activities for NASA’s ICESat-2 and was published in the Annals of Glaciology. 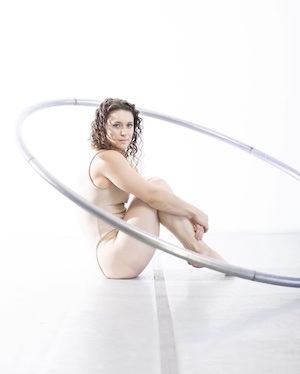 Julia Ruth on the cyr wheel.

While Ruth was studying the physics of Earth systems, she craved a physical activity. She had always wanted to do gymnastics, and UMD had a non-competitive, performance gymnastics troupe. “I love being active in team sports, as it helps me focus, [but] I didn’t want to be a performer. I wanted to compete,” she says. “I had stage fright.” But this troupe did not require an audition and provided training—it welcomed newbies like her.

Her inaugural performance fed her momentum. “The high from the audience’s attention and the feeling of being able to captivate them was incredible,” she says. “I wanted more. I fell in love.” She remained with the troupe the rest of her time at UMD, practicing two to three hours each day, in combination with regular weight lifting for cross training. She graduated with high honors with a bachelor’s in physics and meteorology.

As her undergrad education came to a close, she wondered how to continue experiencing the performance high and improve her tumbling, dance, and gymnastics. Ruth, who had been awarded an NSF Graduate Fellowship, enrolled in the PhD program at Scripps Institute of Oceanography in San Diego. She planned on getting her doctorate in geophysics. But the west coast move was strategic for another reason: one of the most prominent circus schools is located in this city, and she had already arranged to train with a leading coach in the circus arts.

Her plan was clear: circus would be a side gig. “I had full intention of finishing my PhD and was going to circus-train on the side to get stronger,” she says. And yet, she knew she did not want to be a research physicist, and the longer she put off being a performer, the less opportunity she would have to do it at all. Simultaneously, she was not deriving as much pleasure from physics as she once did. Her geophysics program felt “too removed” from what she liked. “I wasn’t happy. . . I realized I wanted to run off and join the circus,” she says.

She made the decision to leave grad school with her master’s and fully commit to a circus performance career. Her first job was managing events for the circus school, which allowed her to train upwards of six hours each day on core circus performance activities such as dance, flexibility, and handstands. One of her specialties is hand-to-hand, where she holds people in handstands and throws them into flips. Building muscles and developing circus artistry led to her discovering the cyr wheel.

Ruth trained, performed, and networked with circus professionals from around the world, leading to more auditions and jobs. 2019 was her busiest year, where she spent months traveling through Australia, Canada, and the US with various troupes, performing at festivals and other events. Her income was derived from exhibiting her own acts on the cyr wheel as well as performing new acts with different circus clients who hired her. When COVID-19 hit, Ruth didn’t let her career take a tumble. Instead, she repositioned herself: she expanded into coaching kids in workout, flexibility, and—physics and astronomy.

Ruth aims to weave her arts and physics fervor into a novel profession. “I have an idea of creating a one-woman show about string theory to bring to fringe fests,” she says. “What’s a great representation of particles made of one-dimensional loops? Cyr wheel!”

Cultivating a career at the boundary of science and arts requires bravery, and Ruth is no stranger to courage. It took guts to leave her prestigious fellowship. Her advice for professional success? Believe in and listen to yourself. “The jump can be scary, but once I did that, it made making jumps like that even easier,” she says. “I wasn’t a fulltime performer right away, but I have full confidence in my abilities.”