The underrepresentation of Blacks and women in physics, from the undergraduate level all the way through to the senior ranks, is among the most stubborn and frustrating issues facing the physics community.

There are no easy, sweeping solutions to this stunning lack of representation. If we are to make progress, work needs to be done at multiple educational and career levels including middle and high schools where students are determining what careers fit with their interests and identities. Educators and science engagement experiences outside of school have great potential for sparking youth’s interest in STEMM (science, technology, engineering, math, and medicine), and maintaining that interest as they begin to make decisions on careers. Through these supportive and engaging physics experiences, the goal is for all students to feel like welcomed members of the physics community—where they can learn to identify themselves as aspiring physicists.

The British computer scientist Alan Turing once said, "Sometimes it is the people no one imagines anything of who do the things that no one can imagine."

Jones High School in Orlando, Florida, is one of the most socioeconomically challenged schools in its county. Of its 1600 students, more than 250 took on learning physics during the 2020-21 school year. As one of us found (Cottle), the percentage is higher than any other high school in that county, and one of the highest in the state.

Why is this important? With the tremendous pandemic uncertainties in the state and national economies, it is more important than ever that students be given the opportunity to pursue careers in economically resilient fields like engineering, computer science, the physical sciences and the health professions. To ensure four-year graduation rates and be well-prepared to major in STEMM fields, students need to take challenging high school-level math and science courses, including physics. 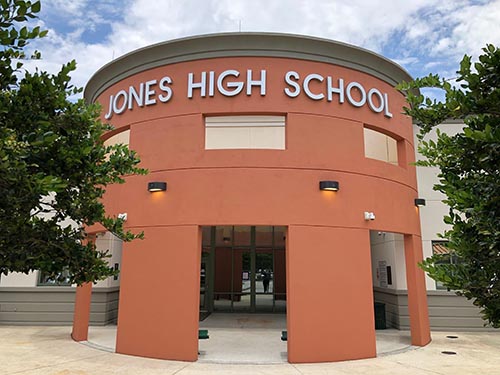 Jones High School in Orlando, Florida is one of the most socioeconomically challenged schools in its county, yet the percentage of students taking physics is higher than any other high school in that county, and one of the highest in the state. 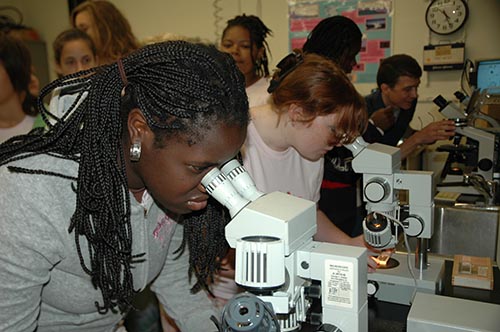 The SciGirls program has expanded to over 400 students with 30% from underrepresented groups in STEMM (Black, Hispanic, Pacific Islander, Indigenous Peoples) and three separate summer camps, including the SciGirls Coding camp.

Those raised in the traditional hierarchical nature and culture of STEMM might portray these fields as spaces where only a small percentage of the privileged few can succeed, putting students from low-income families at a disadvantage from seeing themselves as succeeding in high-powered STEMM careers. As a result, students and even high school counselors do not see higher-level courses like physics and calculus as necessary. But that way of thinking never had a place at Jones High School, where one of us (Gates) graduated in 1969.

Academic excellence, including in physics classes, has a long history at Jones. As Gates attended Jones in the late 1960’s, legal segregation was ending—but that did not matter. Perseverance and striving for excellence were held in high esteem. His high school geometry teacher, Ms. Edna Williams was Gates’ first "intellectual drill instructor in logic," and there were many demanding but supportive teachers: Ms. Thelma Dudley, Ms. Lessie Weaver (English), Mr. William Sanders (Algebra), Mr. Ruben Patrick (French), and Mr. Freeman Coney (Physics) are memorable.

The influence Mr. Coney had on Gates’ life was the most profound, but many Jones High School teachers laid the foundation that led to his being awarded the National Medal of Science in 2011 and his current role as President of the American Physical Society (APS).

The credit for success and ambition of present-generation Jones students goes to current Principal Allison Kirby and the outstanding teachers and counselors she leads. They follow in a long line of school officials and teachers in this effort. Even in the face of the pandemic, Principal Kirby and her faculty kept their students focused on the prize of academic excellence and opportunities that their hard work will open for them in the future.

Gates continues to assist this drive. Since 2004 annually he has supported a prize award for top performance in mathematics/physics classes. Former JHS Principal Dr. Bridget Williams stated, “When he returns to the campus of Jones High School, he spends the day there with those kids. It empowers the entire community.” The 2021 prize recipients, Je’Nyia Burton and Kendersley Marcellin, are among the 250 students in physics classes.

By taking on the challenge of physics, the students now learning from the educators at Jones have brought new energy to the school’s illustrious legacy and have shown the value of taking on big challenges as a supportive and tight knit community. Jones High is showing other high schools how to create physicists in a space that otherwise one could not even imagine. The plan for the next academic year is for every senior student to take physics!

Does the example of Jones High School and the engagement of the 2021 APS President suggest the possibility of other effective ways for university and research physicists to effectively generate positive outcomes in high school physics education? Can the APS community create more examples of such “HS ambassadorship programs” working with teachers and administrators?

SciGirls started in 2006 at the MagLab in partnership with our local public television station WFSU, funded by a small grant from the National SciGirls organization at Twin Cities Public Television. This enabled 20 middle school students from the Tallahassee area in Florida to participate in the first year. Since then, the program has expanded to over 400 students, with 30% from underrepresented groups in STEMM (Black, Hispanic, Pacific Islander, Indigenous Peoples) and three separate summer camps, including the SciGirls Coding Camp. Alumni who have kept in touch (about 12%) have pursued careers that include industrial engineering, science education, applied mathematics, and other STEMM fields.

The goals of the camps are: (1) To provide a safe space for girls to do science (authentic, relevant, hands-on, and interactive activities where they gather evidence to solve problems); and (2) to introduce participants to a diverse array of careers and role models in STEMM. Throughout the camp, the majority of the activities are led, and designed, by women scientists, graduate students, and postdocs, with help from the SciGirls’ lead educators led by one of us (Hughes). Highlights over the years include designing a Rube Goldberg machine, extracting DNA, and visits to labs on local college campuses. Each year the camp begins with an informal luncheon with women STEMM professionals, and concludes with a panel discussion which includes students’ families.

Her skills in STEMM education research allowed Hughes to measure the impact of this program on students’ STEMM identity. She also gathers many of the girls’ stories about their camp experiences, specifically the empowering impact of sharing space with women interested in and succeeding in STEMM. One young woman explained: “I have a very clear memory of sitting at one of the lunch panels that we had where women scientists [came] to talk to us...I don't remember what they did or who they were, but I remember sitting in there and being like, ‘Oh, this is really cool!’”

Other young women have expressed the value of the authentic and relevant activities that they engaged in during the camps. One alumna highlighted the motivational aspect of the camp, indicating that without SciGirls, “I don’t think I ever would have taken an advanced science class. SciGirls took complex material and simplified it down into something that’s interesting, and easy to comprehend”.

And yet, even with these empowering stories, some of our alumnae have told us about negative experiences in high school that made them question whether they could succeed, or if they even belonged in STEMM. Their stories reinforce the need for programs that help to maintain interest and a sense of belonging throughout middle and high school to persist in STEMM careers. It also points to the need for enhanced teacher training such as that provided by the PhysTEC and the APS STEP UP programs. One of us (Greene) is also inspired by the SciGirls program, and notes that in her high school years, no such programs existed, and she had no mentors for her to pursue a career in science.

Both women and people of color struggle to feel they belong even if they persist through high school into college. The intersectionality of marginalized identities makes their reasons for not persisting different [3] as Greene and Gates’ stories show. For women, even if they persist to a physics major in college, they have to overcome sexual harassment [4, 5] and the isolation of sometimes being the only women. For women and men with multiple marginalized identities (e.g., race, income, class, ethnicity, sexual orientation), their isolation in multiple realms makes it difficult for them to feel like they belong in a majority White, middle class, and male field, like physics. This means that to help students and early career scientists thrive and make physics inclusive we need to incorporate multiple strategies [6, 7].

S. J. Gates, Jr. is the 2021 APS President, the Brown Theoretical Physics Center (BTPC) Director, and the recipient of the 2011 National Medal of Science. Roxanne Hughes is the Director of the Center for Integrating Research and Learning (CIRL) at the National High Magnetic Field Laboratory (MagLab). Laura Greene is Chief Scientist, National High Magnetic Field Laboratory and the Marie Krafft Professor of Physics at Florida State University. Paul Cottle is a member of the Physics faculty at Florida State University.