Medical physicist Rosalyn Sussman Yalow became the first American-born woman to receive the Nobel Prize in Physiology or Medicine in 1977. Yalow was one half of a 22-year scientific partnership with physician Solomon Berson that resulted in the development of the radioimmunoassay (RIA) technique. The creation of RIA, which allows for the detection of small quantities of substances such as insulin or enzymes in blood, was influential in opening doors for the field of endocrinology.

Yalow was born on July 19, 1921, in the Bronx, New York, to Clara (née Zipper) and Simon Sussman, and was the youngest of their two children. Neither Clara, who immigrated to New York at the age of four, or Simon, who was born on the Lower East Side, had high school educations, but they expected both of their children to attend college. Yalow, in her Nobel biography, described herself as a “stubborn, determined child,” with a fondness for reading and a dedication to mathematics, which developed in seventh grade. By the age of eight, she had aspirations of being a scientist. She attended high school at Walton High School, at the time an all-girls institution, where she became interested in chemistry.

After high school, Yalow attended Hunter College, an all-female, tuition-free school, where her family hoped she would study to become a teacher. Instead, Yalow was drawn to physics, in part by the excitement surrounding the field of nuclear physics in the late 1930s. Eve Curie’s biography of her mother, Marie Curie, was a source of inspiration for Yalow. Her professors at Hunter College encouraged her to pursue a career in physics, despite Yalow’s worry that good graduate schools would not offer a woman in physics a position or financial support. In September 1940, during her senior year, one of her professors secured her role as a secretary for a leading biochemist at Columbia University, which was supposed to allow her the ability to take graduate courses. The only catch was that she had to commit to taking stenography. However, in February 1941, Yalow received an offer of a teaching assistantship in physics at the University of Illinois Urbana-Champaign, the most prestigious school she had applied to.

In September 1941, Yalow entered the University of Illinois, becoming the only woman among the 400-member faculty of the College of Engineering, and the first woman there since 1917, according to the Dean of Faculty at the time. In her Nobel biography, Yalow notes that the draft of college-aged men into the armed forces leading up to World War II likely opened up space for her to attend graduate school. Her first year was difficult: since Hunter College had not offered many physics courses, Yalow sat in on two undergraduate courses without credit in addition to taking three graduate courses and working as an assistant teaching freshman physics. Yalow would receive straight As in all of her courses, except in an optics laboratory course, where she received an A-, prompting the chair of the physics department to respond, “That A- confirms that women do not do well at laboratory work.”

At the University of Illinois, Yalow would also meet her future husband, Aaron Yalow, who was also a graduate student in physics, the first day of school. They would marry in 1943, with some delay caused by anti-nepotism rules that prevented married couples from being employed by the same university. In January 1945, Yalow received her PhD in nuclear physics and moved back to New York City without her husband (he would join her later that year) to work as an engineer at the Federal Telecommunications Laboratory. In 1946, she returned to Hunter College to teach physics, whose student body now included returning veterans. While teaching at Hunter College, Yalow influenced a young Mildred Dresselhaus to pursue a career in physics instead of becoming a primary school teacher.

Although she would continue teaching at Hunter College until 1950, Yalow began consulting at the Bronx Veterans Association Hospital in 1947 as part of a research program to explore the medical uses of radioactive substances. It was there she would meet Solomon Berson who would become her chief collaborator for the next 22 years, until his death on April 11, 1972. 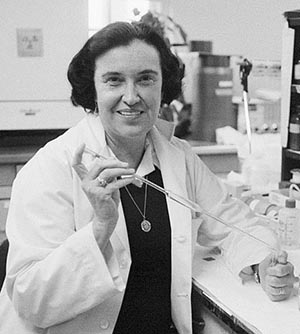 The first investigations Yalow and Berson undertook together were applying radioisotopes to blood volume determination, diagnosis of thyroid diseases, and the kinetics of iodine metabolism. As their work progressed, they found similar techniques could be employed to trace hormones, such as insulin. RIA was first used in 1959 to study insulin levels in people with diabetes but has been since applied to the detection of other hormones, vitamins, and enzymes to diagnose a number of endocrine-related diseases. Yalow and Berson would continue to collaborate until 1968, when Berson accepted the position of Chair of the Department of Medicine at the Mount Sinai School of Medicine.

During this time period, Yalow also balanced life as a wife and mother, raising two children and keeping a kosher home. Yalow held traditional views on her role in homemaking, telling The New York Times in 1978 that she believed it to be a wife’s responsibility. She expressed a belief that the low number of women in science was due to a lack of interest rather than lack of opportunities. While such views caused her to eschew organizations specifically promoting women in science, Yalow had a strong belief in the capabilities of women to succeed in the field. Her Nobel lecture included a call to other women in science: “we must believe in ourselves or no one else will believe in us; we must match our aspirations with the competence, courage and determination to succeed, and we must feel a personal responsibility to ease the path for those who come afterward.”

In 1972, Berson died of a heart attack while attending a medical meeting, leaving Yalow to continue their research alone. According to The New York Times, many people—including Yalow—began to doubt that she would ever receive a Nobel Prize for the pioneering work on RIA, especially after the loss of Berson, who some—erroneously—viewed as the leader of their collaboration. However, in 1977, Yalow received one half of the Nobel Prize, with the other half going to Roger Guillemin and Andrew Schally for work in other fields.

Yalow died May 30, 2011 in the Bronx, New York, and is survived by her two children and two grandchildren. Her scientific legacy also continues to live on through her contributions to medicine. In 2021, to commemorate 100 years since her birth, the University of Illinois honored Yalow as a pioneer for women in STEM by creating the Rosalyn S. Yalow Professorship.