Born 100 years ago, Russian physicist Andrei Dmitrievich Sakharov was a complex man who achieved stardom in the Soviet Union for his role in the development of the USSR’s nuclear weapons but then became one of the world’s most outspoken activists for human rights. One of the most prestigious prizes awarded by the APS bears his name.

To recognize Sakharov’s achievements as a physicist and peace campaigner, several APS units came together with the Russian-American Science Association (RASA) to organize “Sakharov-100: Physics, Peace, Human Rights—Celebrating his contributions to science and humanity.” Meeting support and assistance was provided by APS.

“The ‘Sakharov-100’ webinar reached 396 people from 31 countries distributed on each continent including the US, Russia, and Europe,” said Vladimir Shiltsev (Fermilab), a member of the organizing committee. “It was a true celebration of an amazing human being.” 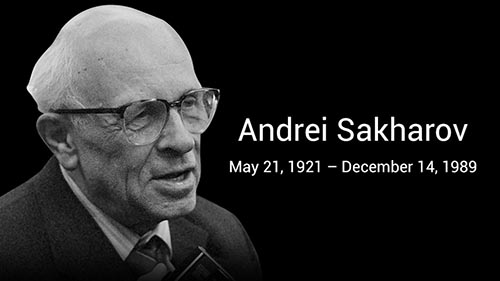 The first session of the meeting focused on Sakharov’s scientific contributions to the physics of fusion and energy generation, chaired by Roald Sagdeev. Dmitri Ryutov (Lawrence Livermore National Laboratory) reviewed the first steps to controlled fusion energy based on Sakharov’s ideas. Bruno Coppi (Massachusetts Institute of Technology) discussed aspects of current fusion research and large-scale research collaborations. Kristel Crombé (Ghent University) gave an overview of the International Thermonuclear Experimental Reactor (ITER) project, which would not have been possible without the work of Sakharov.

“The Sakharov Centennial event opened my eyes to the scope and breadth of his impact on our world. His story is a must-know for students of history, science, and physics,” said Alan Hurd, a member of the organizing committee.

A list of sessions and a video recording of the entire conference is available on the FIP unit website.