The APS Council of Representatives currently consists of 35 members of the Society and is responsible for providing oversight of APS publications and conferences, approving policy statements, electing APS Fellows, distributing prizes and awards, ratifying amendments to the Constitution and Bylaws, and managing other matters relating to the scientific mission of APS.

The Speaker of the Council presides over the Council of Representatives and is elected from the Council. Baha Balantekin (University of Wisconsin) is the current Speaker, and APS News asked him to share his thoughts about his journey in physics and the role of the Council. The interview has been edited for length and clarity. 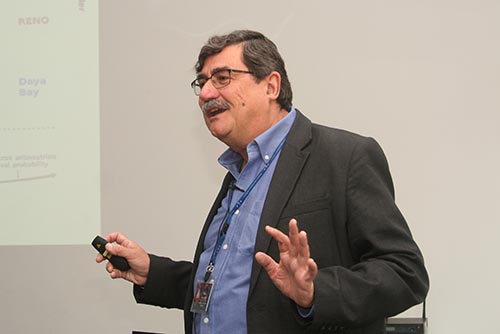 What was your path in research and with APS?

I went to graduate school at Yale University, where I worked on theoretical/mathematical nuclear/particle physics. After that, I went to MIT as a postdoc and a Wigner Fellow at Oak Ridge National Lab. Then I moved to the University of Wisconsin, where I've been for almost 35 years. I also have visiting adjunct appointments at the University of Washington in Seattle and the University of New South Wales in Sydney.

I've been involved with APS for some time. About a decade ago, I was the Councilor for the Division of Nuclear Physics and at that time I was elected to the APS Board and served just before APS reorganized its governance structures in 2014. Then a couple of years ago, the DNP Councilor left, so the division asked me to take over and run for the position again. So that's how I got to be on the Council a second time.

What are some of your current research interests?

I am a theoretical physicist, even though I am a member of several experimental collaborations, but my role is primarily to provide theoretical feedback. And occasionally I take the night shift for fun. But my primary research area is theoretical physics at the interface of nuclear physics, particle physics, and astrophysics. And more recently, I'm getting involved in quantum information science applications in nuclear/particle astrophysics.

I'm collaborating with an experimentalist colleague, Mark Saffman, at the University of Wisconsin who's building a quantum computer based on neutral Rydberg atoms. We are hoping that he will be able to have a functioning quantum computer with 121 qubits. With that we want to be able to simulate the behavior of the nuclei in target materials for dark matter detection. We also want to explore collective neutrino oscillations in supernova and neutron star mergers.

What do you see as the role of the Speaker?

What are some of the challenges facing APS and the Council?

Of course, the biggest questions for APS in general and Council in particular involve the pandemic. This has been unprecedented—I don't remember any other time in APS history when activities were curtailed to this extent. Undergraduate and graduate teaching went online, which was a completely new paradigm for most of us. Research activities went online, and we couldn't travel. When you are together with your collaborators in front of a blackboard things go much faster.

My experimental colleagues couldn't go to their labs for a long time. So, this affected the physics community in so many ways, and this is obviously one of the greatest challenges we face as a community. We must get back to our routine and basically build it better than it was.

We learned valuable lessons from this. For example, we put all the meetings online and everything became virtual. There are some very positive aspects of online meetings. People who have childcare responsibilities or care for their older family members didn't have to travel. But there were some negative aspects, such as the question-and-answer periods not being as active as before. And of course, a meeting doesn't end when the talk is over. It goes on in corridors and during the lunches and dinners. We missed all that, and we're now trying to decide what future APS meetings should look like. That's a place where the Council can play a role.

I'm aware of the publication issues as well. There are completely different questions coming into play, like what happens to the Physical Review journals as open access becomes more widespread? What's the future of the journals? So those are questions, I think, more likely to be discussed in the APS Board because most of them directly relate to budgetary issues—the journals bring in a lot of revenue to APS. But of course, one would like to get input from the Council and the membership as well.

During the pandemic, a lot of graduate students couldn't finish their experiments, so they couldn't graduate. Many universities basically stopped faculty hiring for some time. These things very negatively affected the younger people in the field. That's something that we must address and see how we can resolve some of those problems now.

There are two other areas the Council can play a role. One is that APS has recently revamped its ethics guidelines. The other is diversity, equity, and inclusion. This is something that APS is trying to bring to the forefront. For example, we would like to be more inclusive in the council meetings. That means we are bringing in representatives from national Black and Hispanic organizations, as well as the recently established APS Forum on Diversity and Inclusion.

How does the Council represent the membership?

The Council is the bridge between the APS members and the APS leadership, so it is a very valuable avenue to provide input into APS. The Councilors come from all the membership units, so the Council is attached to the membership directly. But the goal is for the membership to own these priorities as opposed to us telling them what they're going to do. And something like that, I think, can only be achieved in a group like the Council.

I would like to see APS members to be more active in the Society's affairs in any way they can. People are busy, but I want them to increase their involvement in APS and make sure that they understand what APS is trying to do. I want them to speak up and provide input to the Council and to the Board. I think that's very important because that's the only way the Council will be a true representation of the membership.

Members can join APS Divisions and other membership units and directly talk to their unit counselors and ask them to bring up something at the Council meetings. This can be a valuable conversation in both directions. There are so many good things that APS does over a wide range of activities. But not everyone in the membership is aware of these activities. Sometimes they say, "why doesn't APS do X," and it turns out APS is already doing that.

For more information about the APS Council, visit aps.org/about/governance/leadership/council/.