The Division of Gravitational Physics

With around 1,700 members, the Division of Gravitational Physics (DGRAV) is a home for physicists interested in the study of gravity. This spans the detection and interpretation of gravitational waves, experimental tests of gravitational theories, computational general relativity, relativistic astrophysics, solutions to Einstein's equations and their properties, alternative theories of gravity, classical and quantum cosmology, and quantum gravity.

“Gravity is a very old field, dating back to Newton and Einstein,” noted DGRAV chair Gabriela Gonzales (Louisiana State University). However, DGRAV is a relative newcomer among APS’s ranks. The unit got its start as the Topical Group in Gravitation in 1995 and achieved full division status in 2016. It now enjoys more influence and visibility within APS, with a greater number of invited sessions at APS Meetings and more seats on the APS Council. 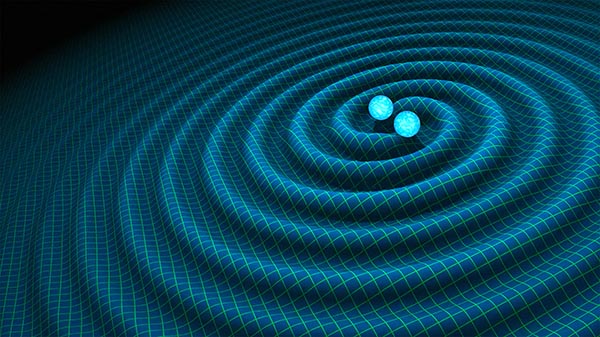 This is an especially exciting time in the world of gravitational physics, which has transitioned from a highly mathematical field to an experimental one with the construction of large observatories to detect gravitational waves, ripples in space-time caused by high-energy events like a collision of two black holes or a supernova. Einstein’s theory of general relativity predicted the existence of gravitational waves, but they were not observed until 2015, thanks to the highly sophisticated Laser Interferometer Gravitational-Wave Observatory (LIGO) detector. LIGO is composed of two giant L-shaped interferometers, one in Hanford, Washington, the other almost two thousand miles away in Livingston, Louisiana. Passing gravitational waves will cause one four-kilometer-long arm of the interferometer to stretch while the other compresses, but the difference is inconceivably small—1000 times smaller than the nucleus of an atom. LIGO researchers were awarded the 2017 Nobel Prize in Physics (see APS News, October 2017) for the first capture of gravitational waves, and the facility continues to make great discoveries in collaboration with other gravitational wave detectors around the world.

In addition to the rapid advancements in the gravity field, another point of pride for DGRAV is its strong presence at the APS April Meeting. DGRAV typically sponsors 10 dedicated sessions on gravitational physics, in addition to several joint sessions partnered with other APS units such as the Divisions of Astrophysics (DAP) and Nuclear Physics (DNP; see APS News, January 2021), encouraging cross-talk and collaboration between these closely related branches of physics. Abstract submissions are open until December 20 for the upcoming 2022 April Meeting, currently slated as an in-person event in New York City on April 9 to 12.

In contrast to other APS divisions, DGRAV does not organize a divisional meeting, opting instead for multiple regional gravitational physics meetings throughout the year. These include the Eastern Gravity Meeting (EGM), the Gulf Coast Gravity Meeting (GCGM), the Midwest Relativity Meeting (MRM), and the Pacific Coast Gravity Meeting (PCGM). Accessibility is the guiding principle for organizing meetings in this way, explained Gonzalez. “These meetings have low- or no-cost registration fees and are easier for people to attend, often occurring within driving distance,” she noted. This enables more people to attend DGRAV meetings, particularly students. Another incentive for students to attend regional DGRAV meetings is the opportunity to win cash prizes for student talks.

Given the rapidly expanding nature of the gravitational physics field, empowering the next generation of gravitational physics researchers is a top priority at DGRAV. Graduate students and early-career researchers make up 50 percent of DGRAV’s membership and play an important role in the division, including filling two Student Member positions in division leadership. “We’re very proud of having an active graduate student community,” said Gonzalez.

Looking to the future, the DGRAV executive committee’s goals center on increasing engagement among the division’s membership. Faced with fewer opportunities to meet during the pandemic, DGRAV is currently organizing a series of virtual seminars. “These will highlight new themes, new topics, and new people—especially young people,” said Gonzalez. “Meetings are important for career development. It’s not enough to answer a few questions after giving a talk; you need to meet with people, and that has not been happening during the pandemic.”

Complementing this, Gonzalez underscored the importance of promoting the participation of women and under-represented minorities in the gravitational physics community. “We created a committee last year to find ways to increase diversity in our field as well as acknowledge the lack of diversity we have,” she explained. While women currently comprise only 15 percent of DGRAV membership, Gonzalez pointed out that the division has historically had very diverse leadership. Men and women are equally represented in DGRAV’s four chair line positions, and women account for an impressive 10 out of 14 members of the executive committee as a whole.

Overall, DGRAV stands out as a close and collaborative community at the cutting edge of an old field that has only grown more exciting. “We work together, and we are a very tight community,” said Gonzalez. “If you are a DGRAV member, you get a voice in electing the people who organize the meetings and starting your own initiatives. We really promote that, especially from young people.” More information on this unit can be found at the DGRAV website.

The author is a freelance science writer in Stockholm, Sweden.