Jessica Esquivel Powers a Career in Particles and People

Jessica Esquivel is a particle physicist, science outreach specialist, and advocate for Black, Latinx, and LGBTQ+ people in STEM, and she has made it her personal mission to enable the success of minoritized populations in science. As an associate scientist at Fermilab, she created her own job, spending half of her time on scientific pursuits to observe physics beyond the standard model, and the other half on workforce development and diversity, equity, and inclusion (DEI) projects. She is the co-founder of the twitter movement #BlackinPhysics and was recently named an AAAS IF/THEN Ambassador, a program dedicated to increasing the number of women in STEM.

“I learned then that while physics amazed me, the road to be a physicist was going to be one with naysayers, non-believers, and barriers,” she told AAAS. “I’m here now—a PhD-toting afrolatinX physicist among a group of only around 150 physics PhD-holding Black women in the country.”

Her journey began as a tot, as she became transfixed by all things space and science. “I was always a pretty nerdy kid. I liked sci-fi movies and shows and reading about kids saving the galaxy,” she says. “STEM was always with me as I was growing up.” Most of her family pursued health care professions, but Esquivel’s time in STEM-focused summer camps and a science magnet high school showed her a different calling. “Physics caught my attention. I found physics hard, but I liked that it was hard, that it pushed me,” she says. “That challenge and rigor kept attracting me. I fell in love with physics for real, for real.”

But that love affair, like so many, was complicated. When she arrived at St. Mary’s University in San Antonio, Texas, she considered studying electrical engineering, because growing up, “we saw engineers having money and thought that was a meal ticket.” But her first college physics class reminded her why she loves physics. “Learning about superposition of different states and Schrodinger’s cat blew my mind. This new physics really called to me,” she says. “I had a great physics professor who was the department head and had a vested interest in getting BIPOC [Black, Indigenous, People of Color] people and women into physics. I told him my predicament: that I don’t know any physicists who make money, so he suggested double majoring.” And despite the engineering faculty telling her it was impossible, she graduated with a double major in 2011. 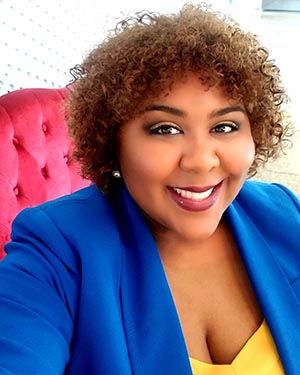 But it wasn’t an easy road. There weren’t a lot of Black people in either department, she notes. “At St. Mary’s, we had a Black student union, but we were still the minority. But I felt I belonged because I am also Mexican, and I could speak Spanish,” she says. “Yet, the fact I am Black, [and] a woman in a male-dominated field, I spent a lot of time trying to prove myself and working by myself.”

Her physics mentor became a trusted ally in many ways. “He took a vested interest in me as a student and as a human being,” she says. “He was one of the first people I came out to in the department. He always had a plan to get me where I needed to be successful to move on to the next stage of my career.” Her mentor also helped her secure an internship at Northrup Grumman and land a Research Experience for Undergraduates (REU) at Columbia University, where she got her first exposure to particle physics research. This experience became the basis of her PhD at Syracuse University, which focused on machine learning techniques for muon and pion particle identification.

While “it was cool to be part of the MicroBooNE experiment from inception to creation to data taking,” she says, her doctoral experience was anything but cool. She describes it as traumatic. “At Syracuse, it was a culture shock. I was the ONLY of everything—lesbian, Black, Mexican—and it was super, super isolating. Syracuse in general is a very segregated city by race and class, so… I was dealing with microaggressions at a much higher rate than in Texas.”

It was really hard to focus on the school work. “I didn’t have a community to collaborate and study with, which I was used to in undergrad, and I didn’t seek that out because I felt like I didn’t belong, like I wasn’t smart enough to be there, that I had gotten in because I was Black and a woman. My advisor was hearing through the faculty grapevine that I wasn’t going to make it, pass the quals, or survive the next courses,” she says. “[These] were barriers to me doing well.”

Her advisor offered her an enticing option: she could finish her PhD at Fermilab. In a nanosecond, she hopped a plane to Chicago and discovered a new avenue for doing physics, one where she is valued and nurtured. She immediately felt better, stronger, as Fermilab was “more inclusive,” she says. And with offices focusing on communications and outreach, she was able to delve into her other passion of community engagement. “I became a fixture in those offices and they recognized I could be accessible, and especially to underrepresented minorities.”

But, she adds, “it wasn’t all ice cream and rainbows.” When she inquired about working with a team doing machine learning, an area in which she had expertise, the group “straight out said no. I literally felt like I was in elementary school and the cool kids didn’t want to sit with me.” As she completed her doctoral research, “there were incidences where I presented my work and my expertise was being questioned left and right… They weren’t asking questions to help me be better—there were questions instead to show I didn’t know what I was talking about.”

Still, Esquivel enjoyed the community engagement aspects as well as big science at Fermilab. She landed a postdoc to work on the Muon g-2 collaboration, where she got to advance both the science and scientific outreach she craved.

When the pandemic hit, conversations about social justice resonated with her. “The civil unrest in our country came to a crescendo with George Floyd’s murder. Black people were dealing with collective trauma but people [at Fermilab] were going through their days like nothing was happening and that’s when I realized we still have some work to do. The same issues I was battling with in grad school had followed me here.” She notes there were only five Black scientists at the lab at the time. “We are all really siloed. This is the white supremacist structures that keep Black people separate so we can’t find our collective power.”

Esquivel and her Black colleagues launched an initiative called Change Now. They researched and wrote a strategic plan to enable Fermilab to be a more just, inclusive, and equitable place for Black scientists. “This was scary. I was a postdoc, a temp employee. And now I am stirring up shit. Throughout my career, they said keep your nose in the books until you get tenure and then you can do what you want. But I couldn’t be silent. It was detrimental to my mental health. Conversations around race are difficult but they need to be done, you have to move through the conflict to move forward.”

She knew it could be a “career killer,” but she continued voicing her concerns. To her surprise, her boss asked her “what would your dream job look like at Fermilab? What would it take to stay?” Esquivel was open: “I told him the work I do on the side, the DEI, community engagement, these keynotes, that I am keeping secret because they are not valued in physics at this time. I said if I can’t share this bleeding edge physics I am working on with people who look like me, it’s not fulfilling to me.”

Fermilab listened, and in May 2021, they created a job for her, as an associate scientist working on science and social justice initiatives. On the science side, she is currently working on software issues relating to data quality. One of her current social justice projects, which was selected as an APS Innovation Fund finalist, focuses on supporting the mental health of Black women and gender non-conforming people in physics. “I now have the ability to spearhead these initiatives to build from the ground up,” says Esquivel.

Making physics a more diverse and equitable field will require a lot of work, but Esquivel is hopeful it’s possible. “Change doesn’t happen overnight. It takes continued work to change a system that is as American as apple pie,” she says. “But I am seeing change in my department and collaboration in recognizing this anti-Black racism that is pervasive in America and not shying away from it and how we will dismantle these systems.” Esquivel is already seeing results of a new DEI task force for the collaboration. “I’m literally seeing senior people discuss how the power dynamics in our field are hurting URMs…We are no longer shying away from having these conversations about race and white supremacist structures that Black scientists have to maneuver to get to where we are today.”

Looking back on her journey so far, Esquivel is most proud of “finding my voice, and not [being] scared to use it… I still battle it to realize that I do have something to bring to the table that deserves to be spoken out loud. The way I move through the world because of my identities have shaped the way I think, and it is completely different than the homogeneity in physics right now. If we have any shot at solving these secrets of the universe, we need all these different thought processes.”

As Esquivel told the California Academy of Sciences, “I am a badass particle physicist because of—not in spite of—these identities.”